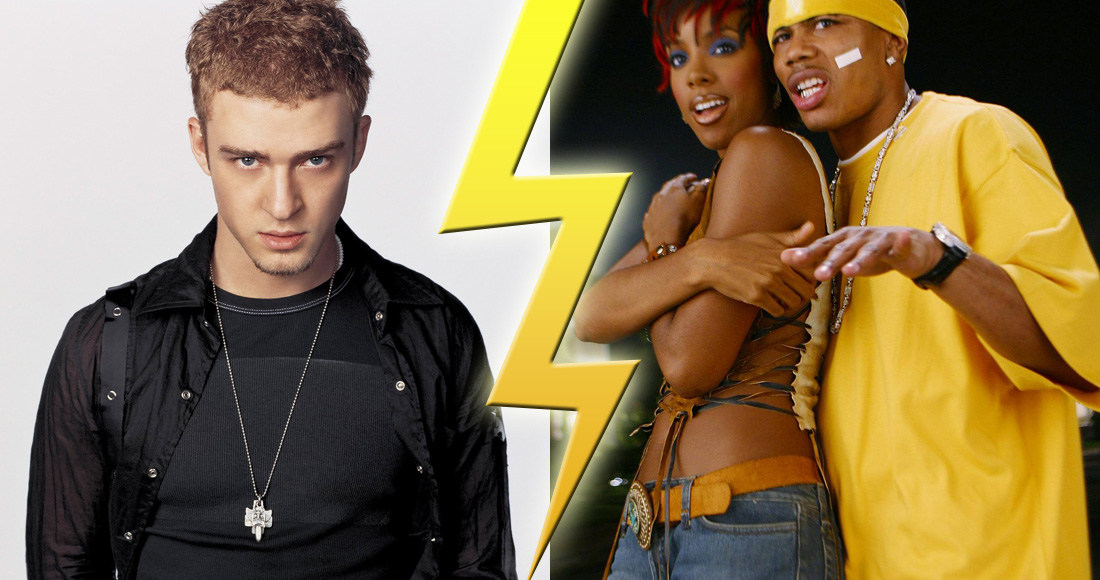 Given Justin Timberlake's track record on the Official Chart, which includes four chart-topping singles and three Number 1 albums, it's easy to forget that his debut solo single missed out on chart glory.

15 years ago this week, in 2002, Justin launched his solo career with Like I Love You. It was a significant step up from his output with the now-defunct *NSYNC, a slice of pop-funk produced by the Pharrell-fronted band Neptunes and featured hip-hop duo of the moment Clipse.

Its slick and snappy percussion combined with Justin's breathy vocal had more than a whiff of Michael Jackson about it, and like the King of Pop himself, chart success seemed a given.

However, Like I Love You was no match for R&B's new power couple, Nelly and Kelly Rowland, who denied him Number 1 with their duet Dilemma.

The duo's cutesy to-ing and fro-ing had stormed to the top the previous week with 208,000 sales and shifted another 129,000 the following week to keep its place at the summit. Justin's Like I Love You sold 87,000 to debut at Number 2.

Dilemma was near-unstoppable at the time, logging two weeks at Number 1 and finishing as the UK's fourth best-selling track of 2002 - and 23rd biggest single of the decade (2000 - 2010). The story goes that the song was in fact a last minute addition to Nelly's album after being played a demo of the song by producer Ryan Bowser.

The track contains elements from Patti LaBelle's Love, Need and Want You from her 1983 album I'm In Love Again. As a nod to the sample, Patti plays Kelly's mum in the music video, though you might have missed it if you were left perplexed as to why Kelly texts Nelly on an Excel spreadsheet from her Nokia phone. Good luck getting a reply to that, Kels.

To date, Dilemma has sold 935,000 copies and been streamed just shy of 20 million times in the UK, while Like I Love You has sold 330,000 and notched up six million plays on streaming services.

Elsewhere on the Official Singles Chart 15 years ago this week, Blue landed their fifth consecutive Top 10 hit with One Love at Number 3, and Irish rockers U2 were new at 5 with Electrical Storm.

Further down, Red Hot Chili Peppers just missed out on a Top 10 with their now-classic Zephyr Song, peaking at 11, Pop Idol finalist Rosie Ribbons landed her first of two Top 20 singles at 12 with Blink and The Streets opened at 21 with Don't Mug Yourself.