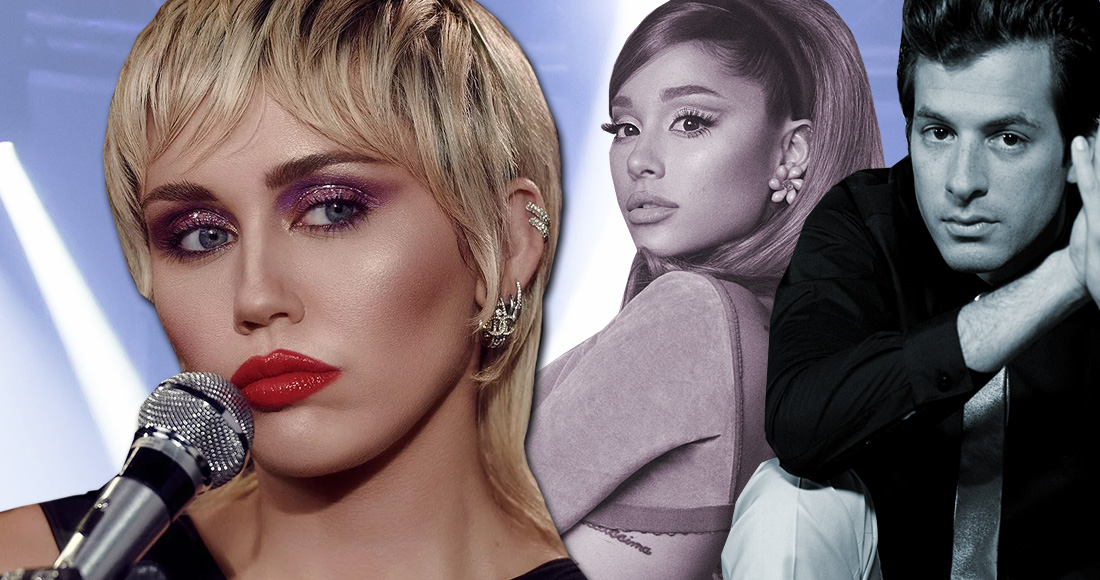 Looking back at all of the fantastic collaborations she has been a part of, it's fair to say that Miley Cyrus' phonebook must be an A-List who's who of famous faces.

To celebrate the release of what is sure to be an iconic hook-up from Miley and Dua, we're looking back at other times big names have jumped on a Miley track, or when has called in a favour for a friend.

None of Miley's collaborations have gone to Number 1 in the UK (her chart toppers We Can't Stop and Wrecking Ball are solo hits) but three of them have reached Number 2, so it should be no surprise that her highest-charting collabs are also her biggest when it comes to chart sales.

Topping the list is Nothing Breaks Like A Heart with Mark Ronson, which has achieved over one million combined (paid-for and streaming) sales in the UK. The country-disco blending bop actually has more streams than any other Miley song full stop - be they collaborations or solo songs - and ranks as Miley's second-biggest overall behind Party in the USA. When it comes to collaborations, Nothing Breaks Like A Heart is top dog with 153,000 paid-for sales and 109 million streams.

In second place is Feelin' Myself with will.i.am, Wiz Khalifa and French Montana. Miley's foray into rap worked well for her, her flow in the song's second verse being as strong as her male counterparts on the track. The UK agreed that the song was "super, super fresh with a dope styling" which led to Feelin' Myself achieving 619,000 chart sales, made up of 349,000 downloads and 29.3 million plays.

The iconic trio of Miley, Ariana Grande and Lana Del Rey are at Number 3 with Charlie's Angels soundtrack single Don't Call Me Angel. With 37 million streams under its belt, DCMA proved popular as it combined Miley's brashness with Ariana's relaxed tones and the unmistakable allure in Lana's voice.

MORE: Cancelled! Singles that were scrapped at the last minute

Three songs from Miley's chart-topping album Bangerz rank in her biggest all-time collaborations, with FU ft. French Montana in fifth, the Nelly-assisted 4x4 in seventh, and SMS (Bangerz) with Britney Spears in ninth.

A pair of songs from Miley's 2019 EP She Is Coming also make the cut, D.R.E.A.M. featuring Ghostface Killah (8) and Party Up The Street (10) in which she joined forces with Swae Lee and Mike Will Made It.