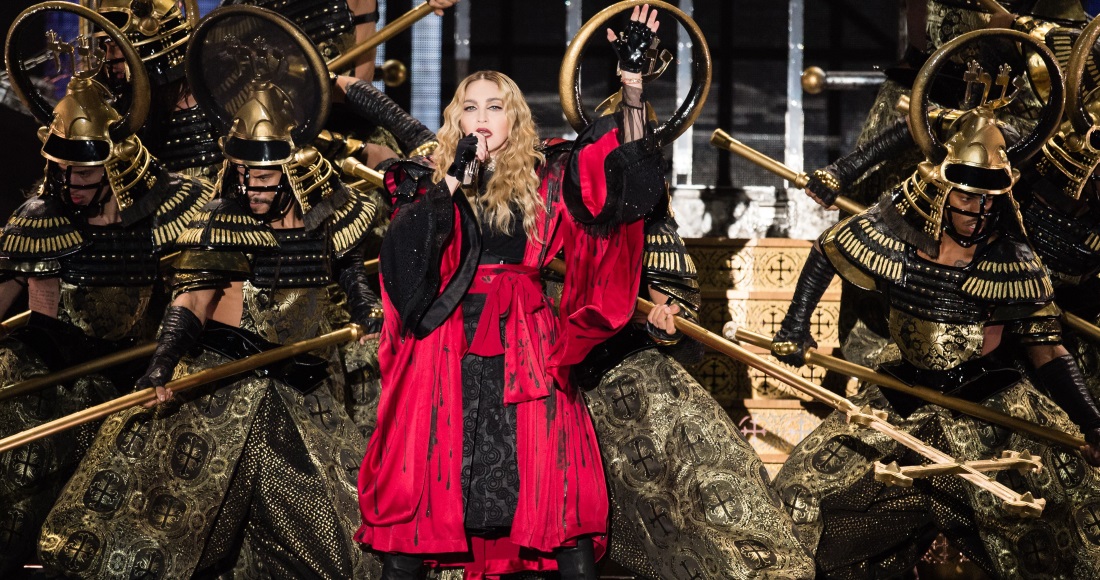 So keen was Madonna to make things right at London's O2 last night (December 1) - a mishap with a matador cape caused her to tumble down a flight of stairs the last time she was here for the BRIT Awards - that she arrived on stage five minutes earlier than scheduled. It was just as well too, given the show failed to finish at the usual 11pm curfew by ten minutes.

No such disasters this time, but anyone thinking she'd play things safe this time were sorely mistaken. After descending from the arena ceiling in a cage, she hung upside down on a cross for opener Iconic, pole danced while straddling a nun in underwear for Holy Water/Vogue and weaved herself around a spiral staircase during a dramatic performance of Heart Break City/Love Don't Live Here Anymore. Not only was every move executed flawlessly, they were done with a physicality and showmanship unlike any of her peers.

For an artist with one of the most enviable back catalogues in pop, the reaction to songs from her latest album Rebel Heart was surprisingly enthusiastic. On Devil Pray she held her own extravagant last-supper-turned-orgy, on Body Shop she slid across a vintage car and prodded dancers with a petrol pump, while for Unapologetic Bitch she dragged Graham Norton on stage for a genuinely funny dance-off. The set pieces were elaborate, the dancing was slick and the theatrics dazzlingly hi-tech; but crucially, the sense of fun was never lost throughout; something Madonna has been criticised for on previous tours.

She was also the most generous she's been with her classics in recent memory. True Blue, Vogue, Deeper And Deeper, Like A Virgin, La Isla Bonita, Dress You Up, Who's That Girl, Like A Prayer, Material Girl and Holiday were all given an outing, often with snippets of her other classics sprinkled in for good measure. For the most part the songs remained faithful to the original; at most tweaked only slightly as opposed to a complete rehash.

MORE: See where all of Madonna's singles and albums have charted in the UK

Now on her tenth world tour, Madonna has refined the art of combining stage theatrics with a pop celebration, but it was her lighthearted humour and seemingly unscripted stage chatter that added an extra joyous layer to the spectacle. During a standout Spanish-themed section, Madonna declared, 'Nobody f**ks with the queen' and, 'Even I have to admit I outdo myself'. It was impossible here to argue otherwise.