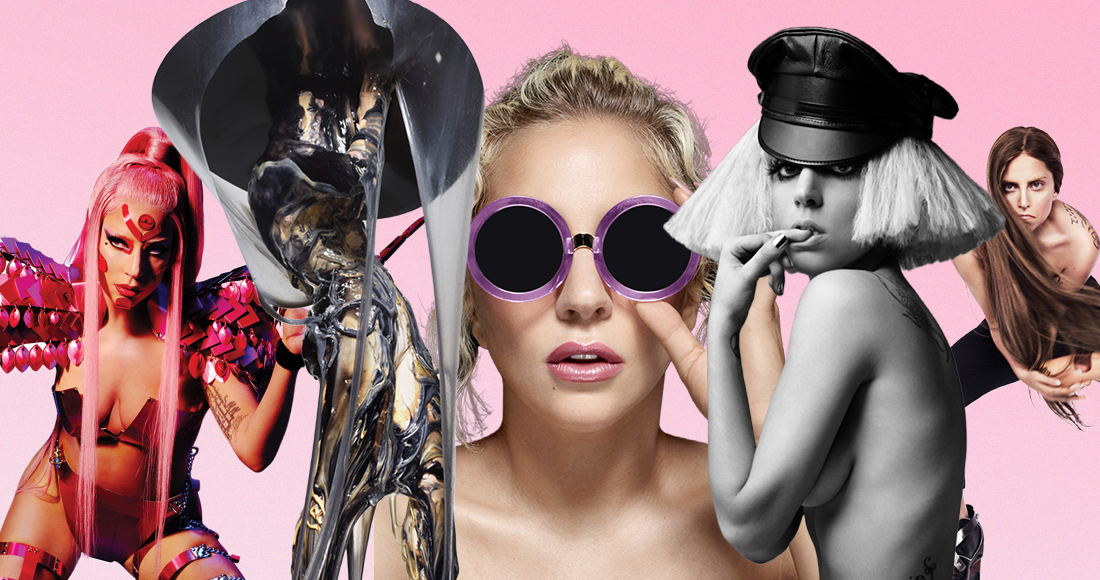 There is only one Lady Gaga.

From the beginning of her career, Stefani Germanotta has always been single-minded in her pursuit of finding greatness through her art. It's taken her on quite the journey so far - six solo albums, several off-shoot jazz records, an Oscar-winning movie soundtrack and, as of the time of writing, four UK Number 1 albums and six UK Number 1 singles.

To celebrate The Chromatica Ball tour (finally) making its way on the road and to the UK - where Gaga will play two shows at Tottenham Stadium - we've crunched the numbers and set messages up to Chromatica itself to reveal Lady Gaga's updated and official Top 40 biggest songs in the UK.

And for Gaga fans new and old, there's something for everyone to love here. Loved A Star Is Born? Cuts from Gaga's Oscar-winning soundtrack count for 11 of the Top 40 in total - including Why Did You Do That? (36) and several collaborations with Bradley Cooper, including I Don't Know What Love Is (28).

MORE: Everything we know about Lady Gaga's Chromatica Ball tour

Gaga's ode to embracing death was written in memory of her grandfather, and finds her ruminating on her final moments on Earth backed by legendary saxophonist Clarence Clemons.

Much of The Fame is spent manifesting the kind of all-consuming celebrity that Gaga would embrace with open arms after the album's release. Nowhere is this more potent that Paparazzi, where Gaga quite literally begs the camera's for their full attention. For better or worse, they would listen.

One of the tightest songs on A Star Is Born, both lyrically and melodically, Always Remember Us This Way has always been somewhat overshadowed by Shallow, but it's popularity on the Official Charts speaks for itself. Despite just reaching Number 25 here, Always Remember Us This Way is actually Gaga's third most-streamed track here, with 118 million streams to its name.

Don't be a drag, just be a queen. Born This Way is as bombastic and overly ambitious as the album that shares its name; it wants you to abandon hatred and help heal the world.

The combination of Lady Gaga and Beyoncé didn't seem to make sense on paper, but in practice you can see exactly why they collaborated. Gaga - at the height of her fame at this point - helps Beyoncé embrace a fiercer, weirder persona than she'd been allowed to showcase previous, and the very presence of Queen Bey pushes Gaga to greater performance heights, especially on the barmy, Kill Bill inspired music video (still waiting on that sequel, girls).

MORE: Songs that took their time to climb to Number 1

The highest-ranking track on this list from Gaga's most recent album Chromatica, Rain On Me is a cathartic, disco triumph all about fighting your way through the other side of trauma. "I hear the thunder coming down," Gaga and Ari croon on the song's magnificent bridge, "won't you rain on me?"

Gaga's sixth and most recent UK Number 1 single, with 153 million streams to its name, it's also her second-most streamed track here.

How do you start a solo career that will help re-define the boundaries of pop music? Three simple words: RedOne, Konvict, Gaga (oh-oh-ay). Just Dance may now rank as one of (if the not the) most commercial offerings from the Gaga oeuvre, but time has done little to dull its shine.

As a road map for Gaga's career and the heights she would go on to reach, it's all neatly packed into Just Dance's 4 minutes and 1 second. Gaga's first UK Number 1 single, Just Dance has chart units in excess of 1.6 million in the UK, making it her fourth most popular song.

The song that indisputably turned Gaga from a pop girl of the moment into an undeniable superstar, it's hard to believe that Stefani Germanotta wrote Bad Romance on a tour bus in the middle of the night, somewhere in mainland Europe, aged just 23. Twenty-three!

A strange and malformed pop song, Bad Romance was the ultimate vessel for Gaga's unlimited and unbridled ambition. Her third most popular track in the UK with chart units in excess of 1.7 million, Bad Romance also holds the distinction of being the Lady Gaga singles with the highest physical sales.

Make no mistake, Gaga was indeed bluffing with her muffin on Poker Face, a slinky and multi-faceted bop all about the intricacies of your sexual identity. The perfect follow-up to Just Dance, it made Gaga into a sensation a world over and its still fascinating people now - Poker Face had the most Googled lyrics of any song in the UK in 2021, thanks to them discovering an explicit secret hidden in the post-chorus.

Overall, with 1.8 million chart units, Poker Face is Gaga's second most popular song in the UK, with 83 million streams too. It's also Gaga's most-downloaded song ever here, with over 1.1 million downloads since it first dropped in 2009.

After a few years in the wilderness post-Artpop, Gaga returned to the public consciousness with one hell of a start to her career's second act. Not only did Shallow (the theme from Bradley Cooper's 2018 remake of A Star Is Born, also starring Gaga in her cinematic debut) become Gaga's fifth Number 1 single in the UK (and first in nine years), it also won her the Oscar for Best Original Song.

Gaga's first mega-hit in the time of streaming means Shallow pulls ahead of the competition, entirely in a lane of its own. It has 2.6 million chart units to its name, more than any other on this list, and has more streams than Poker Face, Bad Romance and Just Dance put together. With streams of 336 million, it's obviously Gaga's most-streamed track in the UK. Perhaps surprisingly, Shallow also has the most video streams for any Gaga visual too; 88 million, more than the rest of the Top 10 put together!