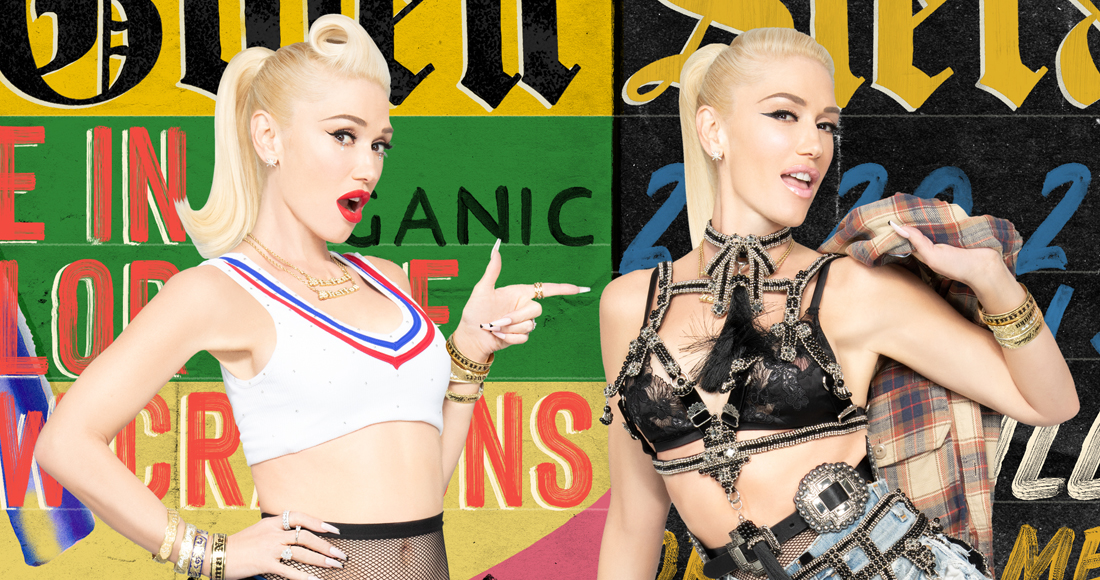 Gwen Stefani has re-introduced herself. With a career spanning six albums with ska-icons No Doubt, four solo pop records of her own, Gwen has had as varied a career that's possible for an instantly recogniseable pop icon.

And now, she's offered up another transformation - or recycling, as she's calling it - with the release of her first solo material in three years (outside of festive LP What Christmas Means To Me), the reggae-tinged Let Me Reintroduce Myself.

Below, we reveal Gwen's 10 biggest hits on the UK's Official Singles Chart, on which she has claimed nine Top 40 singles (so far). View Gwen Stefani's full Official Charts history here.

Having already found success with their collaboration on Hollaback Girl (more on that later...), Gwen and N.E.R.D hitmaker Pharrell Williams teamed up for this single from his first solo album. Despite not cracking the Top 40 in the US, it was a Top 3 hit in the UK, where it has 126,000 chart sales to date.

Released as a promotional single from Jake Gyllenhaal sports drama Southpaw, Kings Never Die saw Gwen link up with rap royalty Eminem. The stirring anthem, on which Gwen performs chorus duties, has been streamed over 12 million times and, despite peaking at Number 82, has notched up 132,000 chart sales.

in 2016, Gwen joined the cast of manic animated film Trolls, and also contributed songs to the film's soundtrack, curated by Justin Timberlake and super-producer Max Martin. In Hair Up, she duets with Timberlake and American comedian Rob Funches. Clearly a hit with Trolls fans, it ranks as Gwen's fourth most-streamed solo hit in the UK, with over 13 million streams, and her eight biggest song with 133,000 chart sales.

Another cut from Trolls, this song is a bonkers mash-up of Junior Senior's 2003 hit Move Your Feet, Justice's D.A.N.C.E. and It's A Sunshine Day from the Brady Bunch. Gwen is a featured vocalist alongside Pitch Perfect's Anna Kendrick and James Corden. Again, it's slightly more successful on streams - hitting fifth place with 12.9 million - with an overall total of 135,000 chart sales.

Now we're talking. Inspired by classic Madonna records, Cool is one of the highlights of Gwen's debut solo album Love Angel Music Baby. Written about her relationship with fellow No Doubt member Tony Kanal, Cool is an ode to a changing and positive relationship with an ex that remains one of her best solo cuts. Just missing the Top 10 upon release and peaking at Number 11, time has been kind to Cool, finishing sixth in her overall Top 10 with 161,000 chart sales to date.

One of Gwen's signature songs, Rich Girl not only reunited her with rapper Eve following 2001's Let Me Blow Ya Mind, but it also played host to a particularly clever interpolation of If I Were A Rich Man from Fiddler On The Roof. Buoyed by a pirate-themed music video from famed director David LaChapelle (Britney's Everytime, Christina's Dirrty) the track has accumulated over 12.3 million streams in the UK and 281,000 chart sales.

Gwen's first official debut solo single, What You Waiting For? deals with the anxiety she felt about leaving No Doubt to go out on her own. Not that she had to worry much: the track hit Number 4 on the Official Singles Chart, its barmy, Alice In Wonderland visuals and electronic composition served as early inspiration for later hits by Lady Gaga and Rihanna. To date, it's accumulated 348,000 chart sales.

Probably her best-known solo hit, Hollaback Girl was composed by Gwen and Pharrell as (if pop legend is to be believed) a response to Courtney Love calling Gwen nothing but a pop music cheerleader. Seems like Gwen had the last laugh, however. Hollaback Girl peaked at Number 8 in the UK and is her most-streamed song, with over 43 million plays. Altogether, its chart sales total stands at 590,000.

A landmark hit back in the day, Let Me Blow Ya Mind was one of the earliest and most successful female rap collaborations, paving the way for fellow chart juggernauts like Iggy Azalea and Charli XCX's Fancy. Hitting Number 4 on the Official Singles Chart, the super-charged track is Gwen's second-biggest, with a mind-blowing total of 628,000 chart sales, including 34 million streams.

Some may see this as a surprise victory, but Gwen's sugary-sweet link-up with Akon is in fact her biggest track in the UK. Released in 2006 as the second single from her sophomore album of the same name, The Sweet Escape comes out supreme, with a massive 731,000 chart sales  (including 38 million streams) to its name. Upon release, it peaked at Number 2 on the Official Singles Chart, her highest chart position as a solo artist too. In the words of Gwen herself: Woo-hoo!