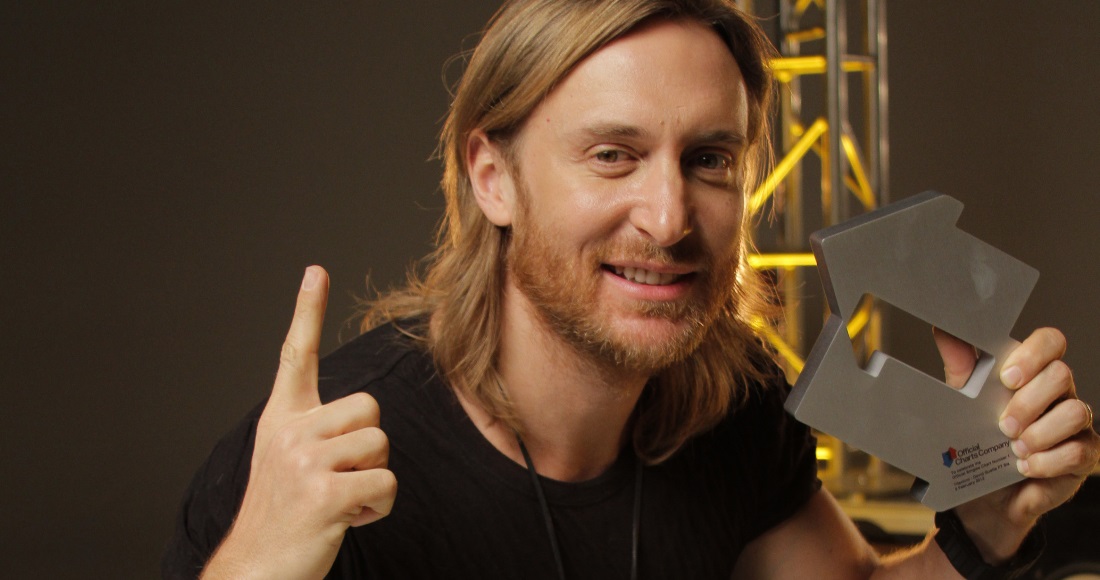 For the last 15 years, David Guetta has rarely strayed from the Official Singles Chart.

The French DJ has notched up an impressive 37 UK Top 40 hits, to date, landing his first in 2006 with Love Don't Let Me Go. This week he releases his seventh studio album - aptly titled 7 - his first full length in four years. It features a monster 27 tracks, comprising of two sides, with one dedicated to David's new house-ier alter-ego Jack Back.

Below are Guetta's Top 40 biggest hits on the Official UK Chart, based on sales and streams combined. But first, some highlights...

After a handful of minor brushes with the Official Chart in the early '00s, 2006 saw Guetta land his big breakthrough with a remix of his debut single Love Don't Let Me Go with DJ Tocadisco's remix of The Egg's Walking Away. Boosted by a feature spot on a car advert and Guetta's own increased profile, the song peaked at Number 3 and launched him to worldwide fame.

It took until June 2017 David Guetta and Justin Bieber to unite, and result is David's second-biggest streaming hit with 55.8 million plays across all major services. Adding in 80,000 downloads, 2U ranks as his ninth biggest single.

5. Where Them Girls At

This 2011 single was to be the first of many, many collaborations between Guetta, Flo Rida and/or Nicki Minaj. Serving as the lead single from his Nothing But The Beat album, pumping party anthem Where Them Girls At peaked at Number 3 and places fifth on his all-time chart, with 532,000 downloads and 20.2 million streams since records began in 2014.

3. When Love Takes Over

When Love Takes Over was as much a turning point for Guetta's career as it was for its collaborator. It was his first big-name hook-up and it gave him his first UK Number 1 single, while simultaneously transforming Kelly from R&B crooner to dancefloor diva. Its combined sales stand at 841,000 to rank as his third biggest single, split between 668,000 downloads, 16.6 million streams and 12,600 copies on CD (!). The duo's follow-up collab, Commander, also appears in the Top 40 at Number 27.

How do you follow a hugely successful Number 1 single? Deliver an even bigger one of course! Teaming up with Akon in 2009, David threw a massive pool party (he has a lot of female friends, you see) and released Sexy Chick, a very - ahem - of-the-times ode to the female form. Questionable lyrics on the explicit version aside, the radio edit was inescapable, and has logged 772,000 downloads and 21.8 million streams.

The song that thrust Sia into the commercial pop world, Titanium is both Guetta's most purchased and streamed release. A Number 1 in 2012 and a million-seller, it's total combined sales stand at 1.9 million, split between 1.3 million downloads and 56 million streams.

It was to be the first of many collaborations between the two: Bang My Head is David's thirteenth biggest smash, 2018 single Flames is at 14, and 2012's She Wolf (Falling To Pieces) howls at 18.