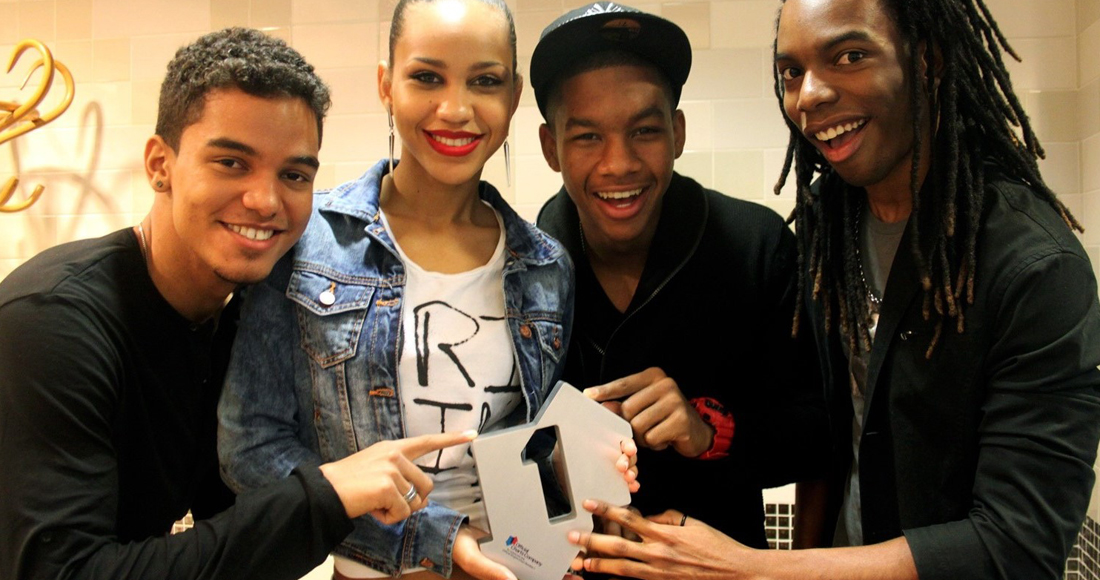 The new award scheme has been introduced by the Official Charts Company to mark the start of 2012 – the 60th anniversary of the Official Singles Chart, and the brushed aluminium trophy will be presented weekly to every new Number 1 single from now on.  The first recipient was the Official Christmas Number 1 of 2011, the Military Wives.

Theofficialcharts.com caught up with Cover Drive to give them a sneak preview of their Official Number 1 Award.

“Arghhhh! We’re Number 1! Woooh! We’ve got this amazing trophy from the Official Charts and we’re so happy, we’re going to put it on our shelf!”

“We just want to thank everyone who supported the record, thankyou so much for buying Twilight and for requesting it on the radio.  We’re so happy and excited and grateful, we can’t even explain.  Please don’t judge us for our girly screams!”

“We went from starting with videos and covers in T-Ray’s basement and putting them up on YouTube as this little band from Barbados to being Number 1 on the charts!”

Check out the video interview to see the band with their shiny Number 1 award, talking about new single Twilight, how it felt to open for Rihanna in Barbados, oh and their most important musical influence…The Little Mermaid.

New release Wild Ones from Flo Rida FT Sia (5), gives the US rapper no less than two entries in today’s Official Chart Update Top 10, as previous Number 1 Good Feeling hangs in at Number 9.  Featured Australian artist Sia also makes it a double today in this respect, appearing with both Flo Rida, and also on David Guetta’s Titanium which has climbed up one place to Number 2.

New entries this week are completed by Bristol DJ/Producer Redlight with Get Out Of My Head. The old school house track features the vocal talents of fellow Bristolian and former X Factor contestant, Nicole Jackson, who made it to the judge’s houses stage in 2009 before being passed over for Rachel Adedeji.

Today’s Top 20 highest climberis Gotye FT Kimbra with Somebody That I Used To Know.  The song by Australian-Belgian singer/songwriter Gotye is taken from his third studio album Making Mirrors.  The track today jumps 14 places to hit Number 7 on the Official Singles Chart where it has consistently climbed and climbed through the Top 100 across the last four weeks.