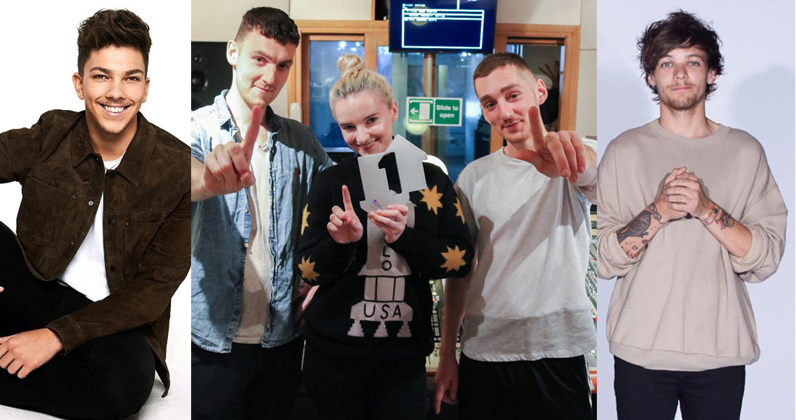 In the face of some stiff competition, Clean Bandit hold on to the Number 1 spot with Rockabye.

The band's second chart-topper, featuring Sean Paul and Anne-Marie, logs a sixth consecutive week at Number 1, scoring a comfortable lead of over 15,000 combined sales ahead of its nearest rival.

The race for Christmas Number 1 kicks off today, of course – can Clean Bandit hang on to claim the festive chart-topper next Friday the 23rd?

Challenging them at Number 2 is this week's highest new entry, Just Hold On from One Direction star Louis Tomlinson, in collaboration with Steve Aoki. The pair performed the track for the first time in Saturday's X Factor final, and the show's eventual winner Matt Terry is right behind them at 3 with his winner's single, the Ed Sheeran-penned When Christmas Comes Around, based on just five days’ sales and streams.

Zara Larsson's I Would Like breaks the Top 20 for the first time, shooting nine places to 12, and Zayn and Taylor Swift's collaboration I Don't Wanna Live Forever, taken from the soundtrack of the new 50 Shades Darker movie, debuts at 16.

Following their electrifying medley performance at The X Factor final at the weekend, Little Mix's Touch zooms 136 places to land at Number 23, while J Cole's Deja Vu starts at 30.

Chris Rea's perennial classic Driving Home For Christmas makes its fourth appearance in the Top 40, at 37 – one of seven festive songs in this week's countdown – and Lady Gaga's Million Reasons climbs 21 slots to make its Top 40 debut, at 39.

Look back through every Official UK Number 1 single of 2016 so far below: