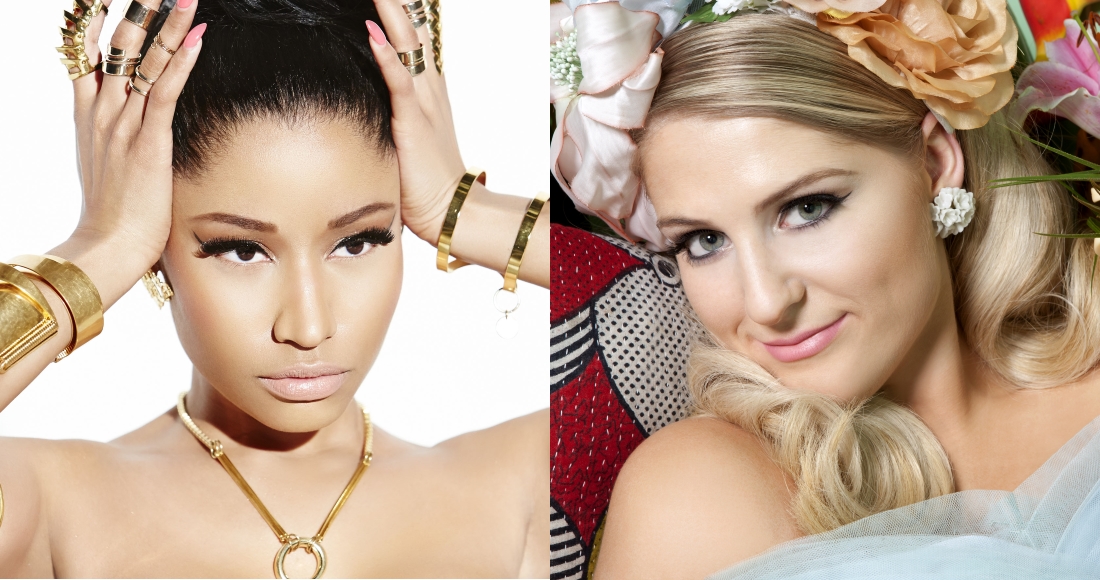 It’s a battle of the butts on today’s Official Chart Update as cheeky new entry Anaconda from US rapper Nicki Minaj takes on reigning champ Meghan Trainor’s All About That Bass. And it’s looking like you possibly won’t snare the coveted Number 1 slot this week “unless you got buns, hun”… or at least a suitably booty-praising anthem.

Anaconda, which rather appropriately features a sample of Sir Mix-a-Lot's Baby Got Back, caused a stir with the release of its raunchy butt-tastic video earlier this summer, and has since racked up more than 237 million YouTube views globally. Going head to head with Meghan Trainor, whose body-positive chart-topper also claims that “boys like a little more booty to hold at night”, Anaconda slithers in as the highest new entry midweek at Number 2, trailing All About That Bass by less than 6,000 copies with all still to play for.

Should its sales momentum continue in the weekend, Anaconda will be Nicki’s eighth Top 10 and 20th Top 40.

Anaconda is also the first of three entries for Nicki Minaj in today’s midweek Top 40. Collaboration with Jessie J and Ariana Grande, Bang Bang, slides one place to Number 3 today, while Nicki’s feature on Usher’s She Came To Give It To You is a new entry at Number 11.

New at 4 is American singer/songwriter Jeremih with Don’t Tell ‘Em FT YG. The track, which features lyrics from Snap!’s 1992 Official Singles Chart Number 1 Rhythm Is A Dancer, is set to be Jeremih’s third UK Top 40.

Rounding out the Top 5 is The X Factor alum Ella Henderson with Glow (5). The follow up to Number 1 single Ghost, Glow is lifted from Ella’s upcoming debut album Chapter One which will be released in the UK on Monday.

Meanwhile Usher is on track to nab his 19th Top 20 single this weekend with She Came To Give It To You FT Nicki Minaj (11). And finally, the title track from Cheryl’s upcoming fourth studio album, Only Human, has shot straight into the Top 75 at Number 61 today after being available for just 24 hours.