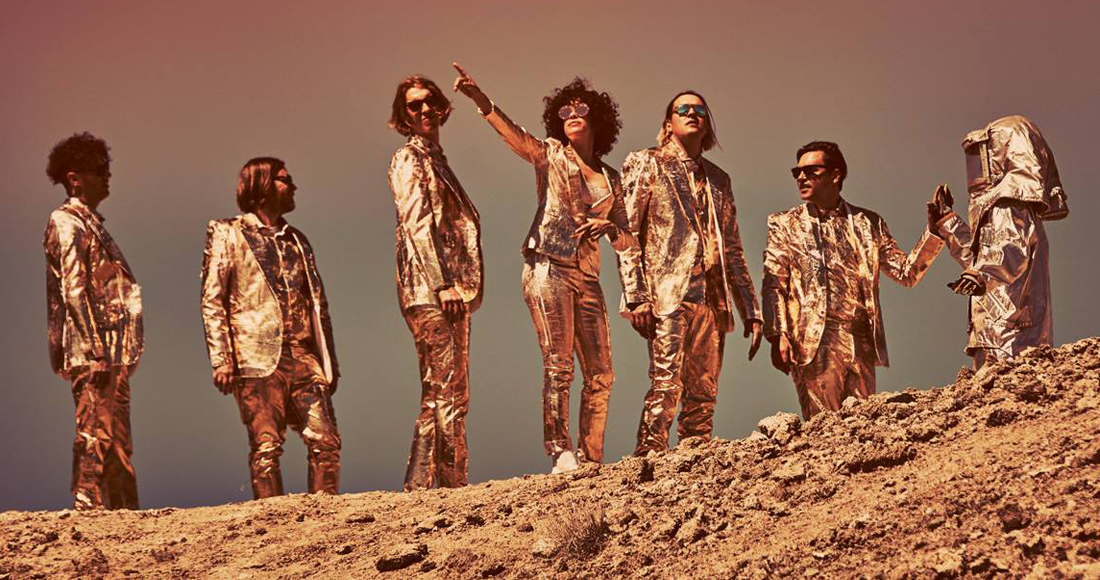 Arcade Fire are on track to score another chart-topper on the Official Albums Chart.

The Canadian collective of anthemic rockers are way ahead with their fifth release Everything Now, which would give them a third Number 1 album, following 2010's BRIT Award-winning The Suburbs, and Reflektor, from 2013.

Veteran rocker Alice Cooper looks set to score a sixth Top 10 with his first album in almost a decade, Paranormal, new at 3, and the Pet Shop Boys are on course for a hat-trick of new entries. The duo are reissuing all their albums over the next few weeks, with added material on some formats, kicking off with Nightlife, Release and Fundamental, which start at 10, 11 and 12 respectively.

At 13, a climb of 14 slots for Glen Campbell’s Adios and right behind him at 14, Haim also make gains, leaping 17 places with Something To Tell.

Manchester rockers The Fall are on course for their 11th Top 40 with New Facts Emerge, at Number 15; Passenger looks set to land a fifth top 40 album with The Boy Who Cried Wolf, new at 17; and soul legend Bill Withers’s career retrospective The Ultimate Collection starts at 21.

Lorde’s Melodrama makes a dramatic return to the Top 40, storming 21 places to 22, and the Bee Gees’ classics collection Timeless: The All Time Greatest Hits also rockets 21 slots to Number 27.

US singer-songwriter Earl is in with a chance of making her Official Albums Chart debut with Tongue Tied, at 30, while a collection of Elvis Presley’s early material, A Boy From Tupelo, is new at 32 – and Fleetwood Mac’s Lindsey Buckingham and Christine McVie rebound 21 places to return to the Top 40 with their self-titled album, at 34.

Katy Perry’s Witness leaps 43 spots and back into the Update Top 40 at 35, the 29th anniversary edition of Super Furry Animals’ Radiator is new at 37, and Nickelback’s Feed The Machine climbs 49 places to land at Number 40.