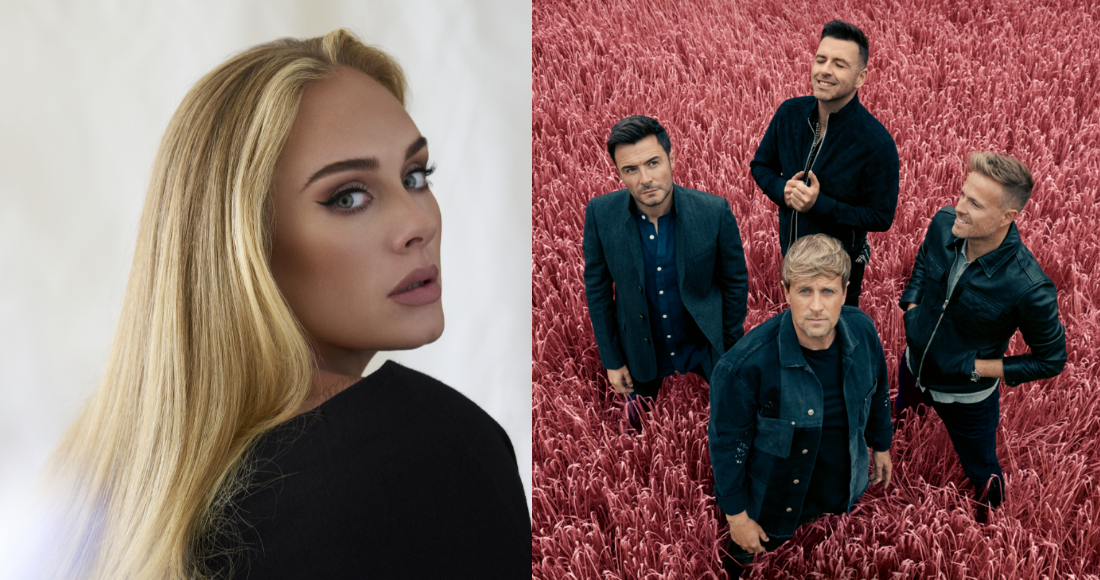 Adele is heading for a second week at Number 1 on the Official Albums Chart with her record-breaking fourth album, 30. Last week, 30 debuted at the top of the chart with record-breaking sales, becoming the fastest-selling album of 2021 so far, as well as the highest first-week sales for a female album in the UK since 25 in 2015.

30 is currently tracking to retain its Number 1 position, holding off its nearest competition; Westlife with their new album Wild Dreams, which is currently set to debut at Number 2, it would be their 14th UK Top 10 album.

Gary Barlow is on track to land his fifth Top 10 collection this Friday with new album The Dream of Christmas, currently at Number 4. Rebounding seven places to Number 6 is Rod Stewart’s The Tears of Hercules, while Michael Buble’s festive Christmas rises 10 spots to Number 7. Elton John’s former chart-topper The Lockdown Sessions could also rise back into the Top 10 this week, currently vaulting six to Number 8.

Outside the Top 10, David Bowie’s posthumous box set compilation Brilliant Adventure is eyeing up a debut at Number 12, while Coldplay lift nine spots to Number 13 with their latest set Music of the Spheres. Another new entry at Number 15 could be heavy metal pioneers Deep Purple with Turning To Crime, while American jazz singer Gregory Porter’s greatest hits collection Still Rising could gain a new peak of Number 19, rising 41 spots following its vinyl release.

British blues-rock band The Temperance Movement are currently looking for a new entry at Number 24 with Covers and Rarities, their first album in three years, while The Beatles’ final record Let It Be could rise 33 places to re-enter the Top 40 at Number 30, thanks to the release of Peter Jackson’s Disney+ documentary series about the making of the album.

This week’s biggest climber could go to Ronan Keating, currently on track to vault 58 places to Number 34 with Songs From Home, while Mancuian post-punk band Ist Ist could reach the Top 40 of the Official Albums Chart for the first time ever with new album The Art of Lying currently at Number 38.

And finally, following rumblings that new music from Arctic Monkeys is on the way, AM re-enters the Top 40, rising four spots to Number 39.