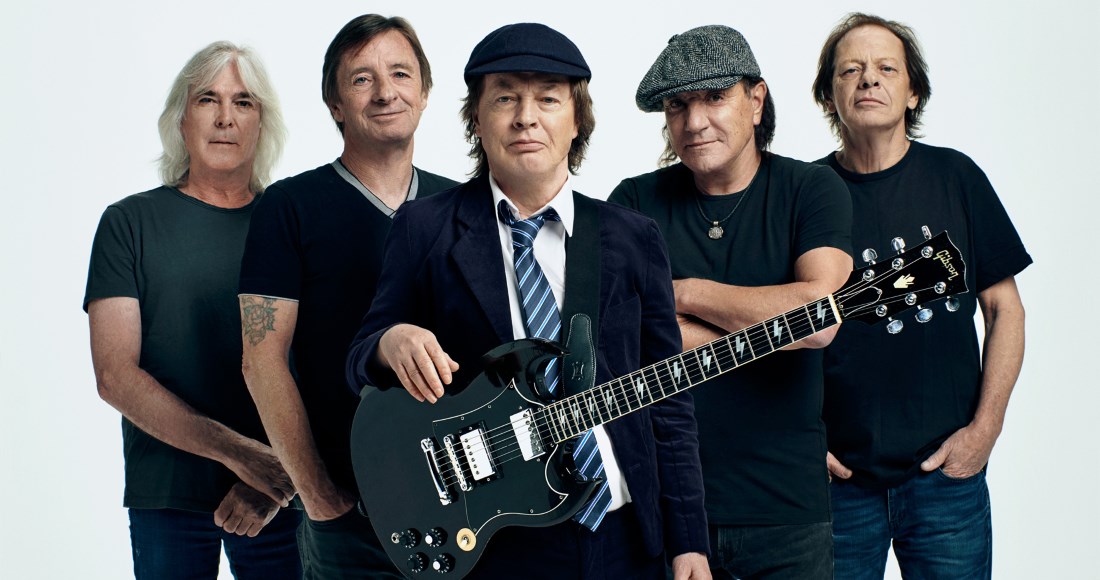 As the new album from the Australian rockers Power Up sets course for Number 1 on the Official Albums Chart, we reveal which of the band's belters hold up best today with their Official Top 10 most-streamed songs in the UK, based on Official Charts Company data. View AC/DC's Official UK Chart history in full here.

A fine example of the band's balls of steel, AC/DC thought nothing of slapping a dodgy bagpipe solo on their 1975 single (apparently the flute was more Bon Scott's thing). So closely tied to frontman Bon Scott is the song that his successor Brian Johnson avoided performing it with the band for more than 25 years out of respect.

Released as a single in the UK four years after its original release (shortly after Scott's death) in 1980, the violent undertones of the title track of their third album was in fact inspired by cartoon Beany and Cecil. One of the cartoon's characters, Dishonest John, carried a business card that read: 'Dirty deeds done dirt cheap. Special rates for Sundays and holidays.'

Hotly contested among fans as the band's greatest guitar riff, Whole Lotta Rosie has, as Malcolm Young said, "a feel like Little Richard, a good old steamin’ rock feel." The legend of Rosie - an enthusiastic Australian groupie Scott gave the now-famous measurments "42-39-56" - lives on, with acts incuding Guns N' Roses having covered it.

The opening bell tolls of this 1980 single are a reference to Scott's untimely death, having passed away just five months before its release. If replacing Scott seemed unimaginable at the time, the song's iconic opening line "I’m rolling thunder, pouring rain," shortly followed by "you're only young, but you're gonna die" ensured the band had pulled off the impossible.

A 1976 single from their second Australian album of the same name, Scott proves he is explosive as a performer - literally. As with many AC/DC songs, the track lives on via use in everything from films (see: Napoleon Dynamite) to adverts for energy drinks.

A live staple and single-that-shoulda-been from their 1980 Back In Black album, Shoot To Thrill was introduced to a new audience in 2010 when it appeared on their chart-topping Iron Man 2 soundtrack.

4. You Shook Me All Night Long

The lead single to their 1980 Back In Black album, AC/DC proved they were still a force without Scott, who had died of alcohol poisoning in February that year. 40 years after its release, You Shook Me All Night Long remains a classic-rock radio staple.

AC/DC's Satan-hailing stomper about life on a tour bus caused quite a stir in certain morality-obsessed circles. It would lead to the band's first UK Top 10 album and long-awaited first hit in the US - but sadly the last for Scott. When they belatedly added their catalogue to download platforms in November 2012, it re-entered the Official Singles Chart and hit a new peak of Number 4 - the band's highest charting track in the UK by a considerable margin.

"AC/DC = power" guitarist Angus Young once said when describing the inspiration behind Thunderstuck. The iconic lightning-quick guitar riff was apparently played in one take, the whole way through the song.

Narrowly claiming AC/DC's most-streamed song is the title track of their 1980 album, a number that has become one of their signature anthems. Recorded as a tribute to Scott, it is widely considered as the defining metal rock anthem. A testament to its endurance, Back In Black made its Top 40 debut on the Official Singles Chart in 2012 - forty years after its release - at Number 27, after the band made their catalogue available to download.