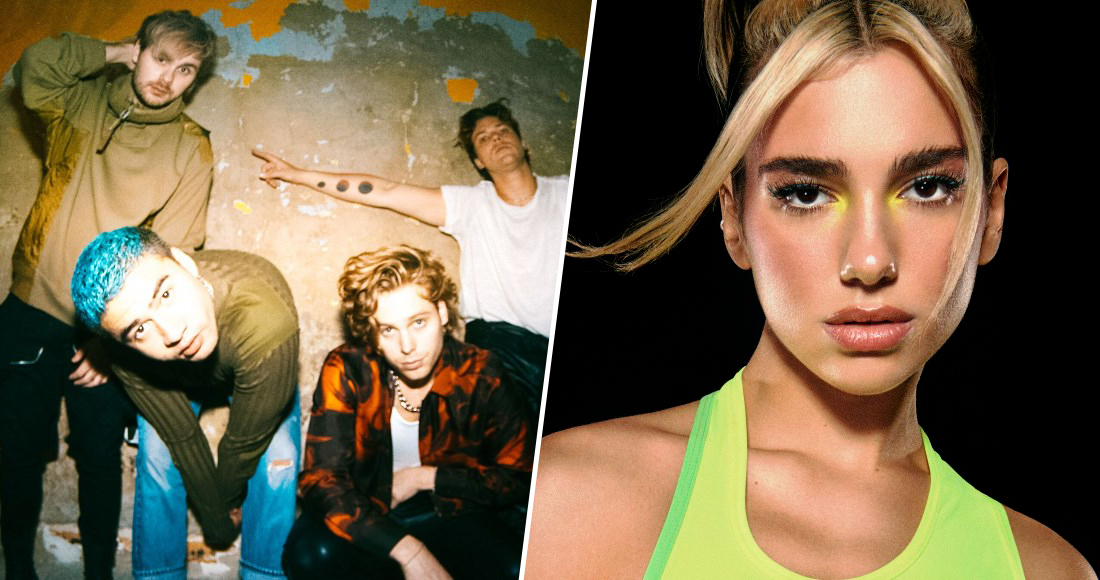 5 Seconds of Summer and Dua Lipa are battling for Number 1 on this week’s Official Albums Chart.

Based on sales across the weekend, 5SOS are currently ahead head in the race for the top spot and could be claiming their second UK Number 1 album this Friday (April 3).

The most downloaded and streamed album so far this week, Dua Lipa’s Future Nostalgia is at Number 2 midweek. The collection – brought forward from its original release date by a week - features the Top 5 singles Don’t Start Now and Physical, plus new single Break My Heart, which is set for a Top 10 debut on this Friday’s Official Singles Chart. Dua’s self-titled debut album peaked at Number 3.

American rock band Pearl Jam round out an all-new Top 3 with their 11th studio album Gigaton, on track to become their ninth UK Top 10 album and first for over six years - see all of Pearl Jam's songs and albums and where they charted in the UK. Also new in the Top 5 are the trio of Skepta, Chip and Young Adz (from D-Block Europe) at Number 4 with their first collaborative album Insomnia. The collection could mark a third Top 10 album for Skepta and Chip and Young Adz’s first.

Canadian rapper Partynextdoor is aiming for a first UK Top 10 album with third studio album Partymobile (7), while Elton John’s greatest hits Diamonds is heading back to the Top 10 after his virtual benefit concert (9).

US rapper and singer Joyner Lucas’s debut album ADHD is new at Number 11 midweek, The Gaslight Anthem’s Brian Fallon could scoop his third Top 20 solo album with Local Honey at Number 14, house duo The Orb are at Number 17 with Abolition of the Royal Familia, and Sleepyhead, the major label debut from indie pop singer Cavetown is at Number 20.

Finally, there are more prospective Top 40 new entries from US heavy metal band In This Moment with their seventh album Mother at 24, and Polish pianist Hania Rani’s debut album Esja at 25.