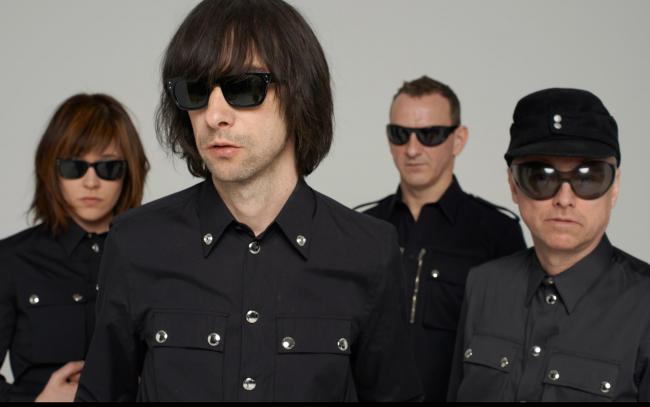 Primal Scream are a Scottish rock and roll band originally formed in 1982 in Glasgow by singer, songwriter and vocalist Bobby Gillespie (born in Glasgow, June 22, 1962) and guitarist Jim Beattie. Primal Scream's current line-up consists of Gillespie, guitarist and multi-instrumentalist Andrew Innes (born May 16, 1962 in Glasgow), keyboardist Martin Duffy (born May 18, 1967[2] in Birmingham), bassist and radio presenter Simone Butler (born in Enfield, London in 1978), and drummer Darrin Mooney (born in Merton, London on April 26, 1967). Primal Scream began as a side project to Bobby’s ‘day job’ of drumming for The Jesus and Mary Chain, playing with them until 1986, and signed to Creation Records in 1985 when Beattie left and Innes and guitarist Robert ‘Throb’ Young (born November 19, 1964, died September 9, 2014) joined, and came to wider attention after featuring on the NME’s C86 cassette which collected together various fringe-owning indie types in cardigans. Primal Scream’s big breakthrough came in 1990 with the release of the song Loaded, which had previously been the ballad I’m Losing More Than I’ll Ever had on their sales-free eponymous album from 1989 until DJ and producer Andrew Weatherall took it down the rave-up and turned it into the group’s first UK Official Singles Chart hit. Primal Scream have enjoyed a series of hit, influential albums such as 1997’s Vanishing Point and 2000’s XTRMNTR, but have gone down in pop and classic album history with 1991’s rave’n’rock mash Screamadelica.