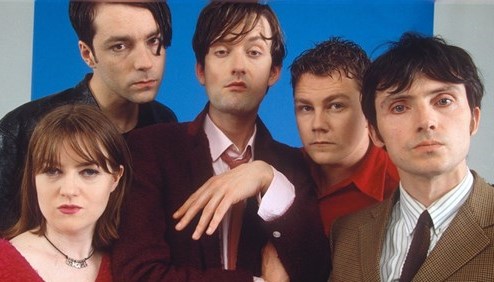 Pulp were an English rock band formed in Sheffield in 1978, by singer, songwriter and musician Jarvis Cocker (born Sheffield September 19, 1963) and their key line-up consisted of keyboardist Candida Doyle (born in Belfast, Northern Ireland August 25, 1963), guitarist and violinist Russell Senior (born in Sheffield, May 18, 1961), guitarist and keyboardist Mark Webber (born September 14, 1970 in Chesterfield, Derbyshire), bassist Steve Mackey (born in Sheffield, November 10, 1966) and drummer Nick Banks (born in Sheffield, July 28, 1965). Pulp knocked around hit-free for the first 15 years of their existence, going through 24 members in the meantime, and finally started to get somewhere in the early 1990s with a string of songs such as Lipgloss, Do You Remember The First Time and Babies, and becoming associated with the summer of BritPop with their UK Official Single Chart Number 2 Common People, and their accompanying album, and UK Official Album Chart Number 1 Different Class in 1995. Pulp were nominated for four BRIT Awards in 1996 for Best Album, Single, Video and Group categories. Pulp stopped for a decade after their last album We Love Life in 2001, reuniting for a string of shows in 2011.