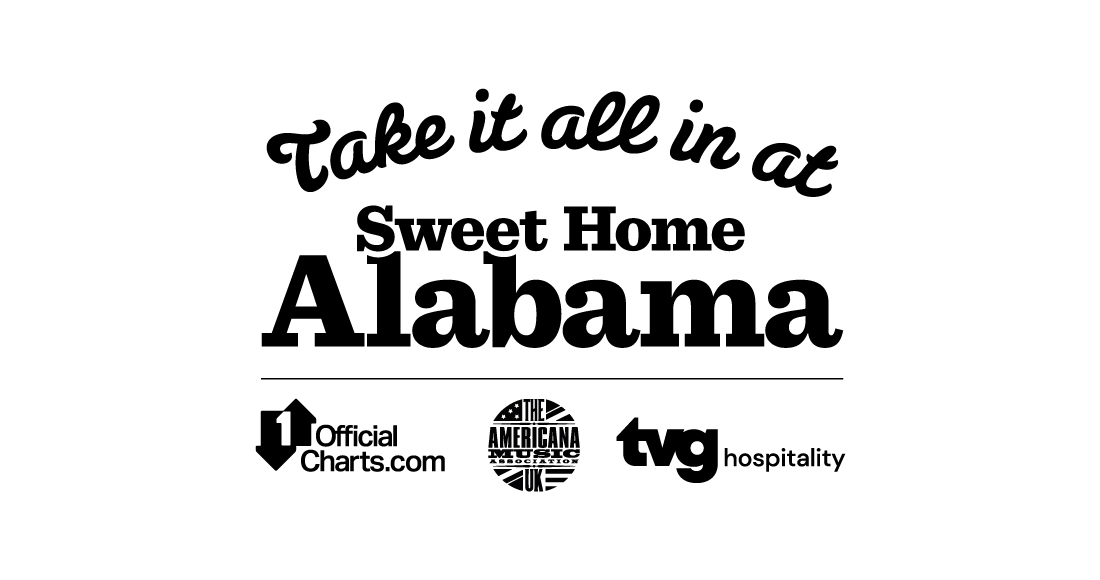 The Official Charts Company and the Americana Music Association UK are delighted to announce a new headline partnership with Sweet Home Alabama for both the Official Americana Chart, and the association’s annual festival UK Americana Music Week and awards ceremony, taking place in January in Hackney.

The Official Charts Company and AMA UK have worked hand-in-hand for the past six years, to promote the vibrant UK Americana scene. January 2016 saw the launch of both the inaugural UK Americana Awards at St John Hackney, and the introduction of the UK’s first official chart for the genre – the Official Americana Albums Chart. In fact, the UK led the charge on the chart front, beating Billboard to develop an official rundown for the genre; the US chart compilers have since followed suit.

It is fitting for this new partnership with Sweet Home Alabama -  a state steeped in musical history - to arrive on the sixth anniversary of such important UK developments for the Americana genre, connecting the scene in Britain with its influences across the pond. Including naming rights to both the chart and festival, the year-long partnership will include a series of new Americana talent profiles, live music showcases, competitions, guides to the best music and tourism experiences across Alabama and exclusive artist interviews with the likes of Lucinda Williams and rising stars Ferris & Sylvester.

In the first of the interview series, Lucinda Williams spoke to OfficialCharts.com about defining the Americana genre:

"For me, in the beginning when it first established, it appeared to be anything that wasn't more commercially accepted. It was the stuff that fell through the cracks; the songs that didn't get a lot of radio play. It was the anti-commercial genre...but it's grown a lot."

The partnership launch coincides with the opening of the Orion Amphitheatre in Huntsville, the incredible new 8000-capacity venue from tvg hospitality, led by CEO Ben Lovett of Mumford & Sons. The long-anticipated venue’s opening weekend is set to feature many beloved artists with deep ties to the North Alabama region, including Jason Isbell and The 400 Unit, Mavis Staples, Emmylou Harris, Brittany Howard and many more.  The Orion Huntsville is the latest addition to a growing, worldwide portfolio. As a leading creator, developer, and operator of venues in London with multiple venues under development in the United States. Future U.S. locations include Washington D.C., Nashville, Austin, Detroit, New York, and Los Angeles.

With physical events and international travel opportunities back on the map, this partnership is a timely reminder of the unifying power of music across geographic boundaries. It was brokered by The Romano Sidoli Consultancy, event and brand specialists in the music, media and creative industries.

Stevie Smith, CEO of AMA-UK says: “We have been working closely with the Official Charts Company these past six years to develop this chart. The Official Americana Albums Chart has been instrumental in the growth of the genre in the UK and we are now so thrilled to welcome Sweet Home Alabama into the mix, working together we feel we can develop the understanding of the genre, its roots and its future to a much wider audience and feel true excitement for what lies ahead.”

Martin Talbot, CEO of the Official Charts Company, who also hands over the award for best-selling UK Americana album of the year at the UK Americana Awards, says:
“We are delighted to welcome Sweet Home Alabama as the first headline sponsor of the Official Americana Chart here in the UK. Since its inception, this exciting weekly chart has gone from strength-to-strength, supporting this vibrant musical sector as it has continued to grow in the UK – and this new partnership is the latest chapter of its development. We look forward to championing the genre, from the icons to its emerging stars, with even more gusto, with the full weight of Sweet Home Alabama behind it.”

Grey Brennan, Deputy Director of the Alabama Tourism Department says: “Alabama has a rich musical history. Hank Williams, W.C. Handy and Nat King Cole were all born here. Aretha Franklin, The Rolling Stones, and Percy Sledge all recorded hits here and our musical future is bright with the opening of the Orion Amphitheatre. Alabama has a musical story to tell, and this will be amplified internationally with our partnership with the Official Charts and AMA-UK. We are thrilled to be the first headline sponsor of the Americana Chart in the UK and powering UK Americana Music Week next year.“

“I’ve thoroughly enjoyed working with Stevie and the team over the past couple of years and this wonderful partnership linking the great state of Alabama to all of the work Stevie has been doing in the UK for many years just makes total sense and we are happy to facilitate.”