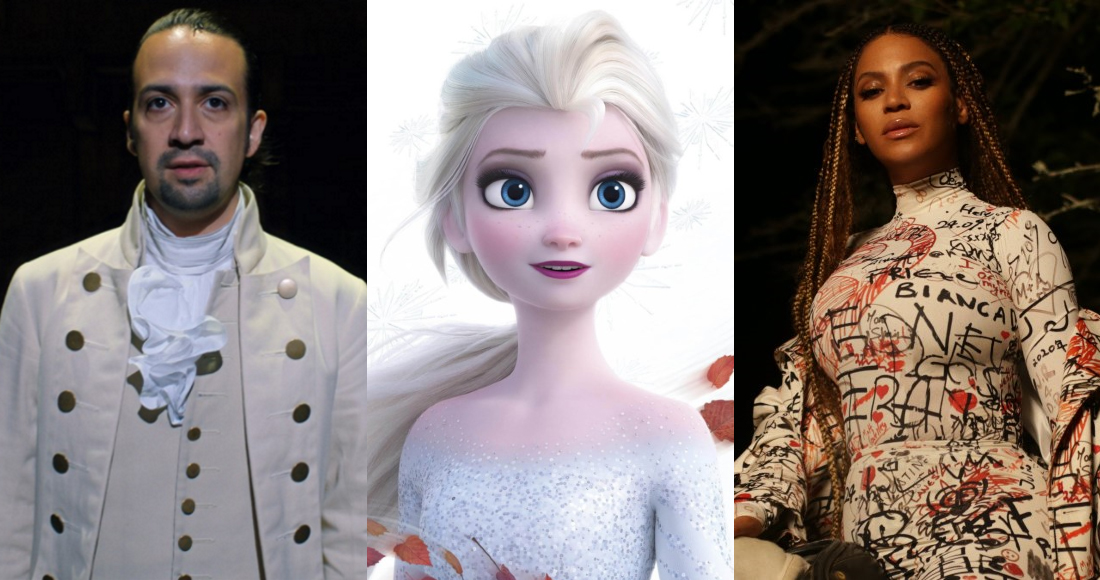 Sales and streams of soundtracks to Hamilton, Frozen 2 and The Lion King: The Gift have soared following the addition of their parent films to Disney+.

The inclusion of Hamilton's Broadway production, Frozen 2 and Beyoncé's Black Is King visual album on the streaming service have led to huge boosts in consumption of the music featured.

The Original Broadway Production of Hamilton starring Lin Manuel Miranda was added to the platform on July 3, leading to a surge in popularity across all formats (CD, download and streaming). The week following its Disney+ debut, the Original Broadway Cast Recording rocketed from Number 10 to Number 1 on the Official Compilations Chart, a rise of 382%.

Frozen 2 had found success on the Official Compilations Chart, spending 10 weeks at Number 1. A consistent performer that hasn't left the Top 10 for since release last November, the soundtrack saw an 84% uplift after it joined Disney+ on July 3, bouncing back to Number 2 on the chart behind Hamilton. Three songs from the movie also returned to the Official Singles Chart Top 100: Into The Unknown (55); Show Yourself (60); Some Things Never Change (89).

Critically praised after its exclusive Disney+ release on July 31, Beyoncé's Black Is King visual album features songs from the deluxe edition of her The Lion King: The Gift album, a companion release to the remake she starred in as Nala. The record reached a new peak of Number 7 on the Official Compilations Chart in August after a 772% increase in chart sales.

Don’t have Disney+ yet? You can sign up here. (If you subscribe to a service through our links, Official Charts may earn an affiliate commission.)