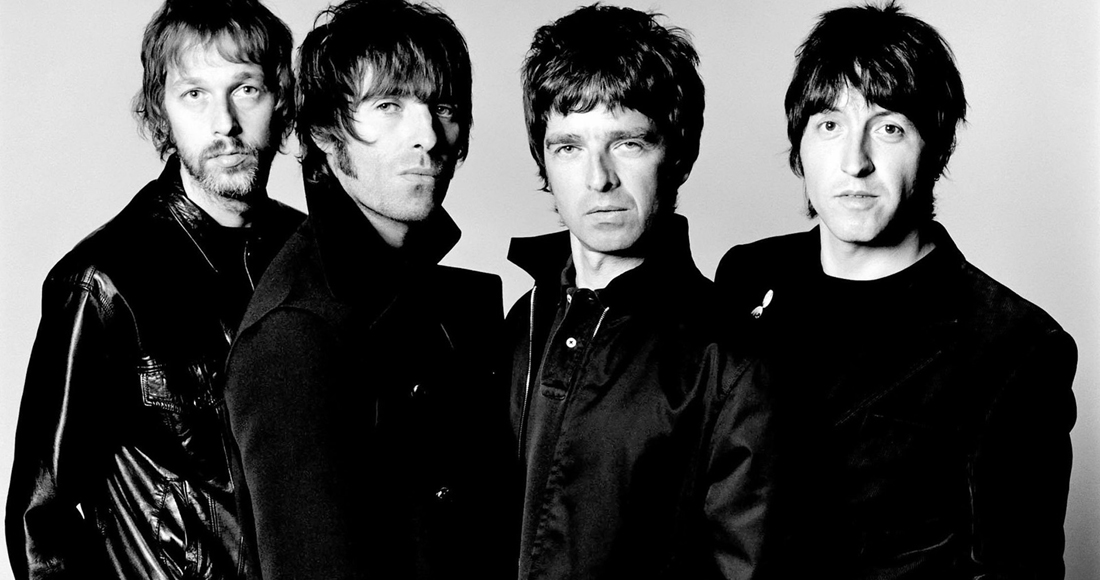 As introductions to rock bands go, Definitely Maybe is certainly a strong one. 20 years ago, all the way back in 1994, Oasis’ bolshy debut album went straight in at Number 1 on the Official Albums Chart. The band are known for their mega-selling albums, with five of them selling over a million, Their second album, (What’s The Story) Morning Glory is one of the biggest selling albums of all time, shifting over four million copies.

But what about the songs? Oasis weren’t exactly shy of a smash hit single either, with eight Official Singles Chart Number 1s to their name. So, we look back at that massive debut album, we count down the songs that made it happen. You can’t have an album without the tunes, after all…

A single that was part of the biggest chart battle of all time and, infamously, lost… Roll With It was the spark that lit a fire under the now-legendary Blur vs Oasis rivalry and had to settle for second place behind their rivals’ Country House when both tracks were released in the same week. The tension went beyond this race to be Number 1, with the bands generally disliking each other for years to come. The truce nobody thought would ever happen did come along eventually, and Noel is now pals with Blur frontman Damon Albarn, who he’d previously called “condescending”.

Oddly, The battle for Number 1 wasn’t as close as you might think – Blur romped to victory with Country House finishing almost 50,000 copies ahead. It's sold 520,000 copies.

Another anthemic song, Whatever was something of an oddity among Oasis singles, as it didn’t feature on any studio album. Intended to bridge the gap between debut album Definitely Maybe and follow-up (What’s The Story) Morning Glory, Whatever saw the band go Top 3 for the very first time – every single they released after would chart no lower until Who Feels Love broke the run in April 2000.

It wasn’t until a greatest hits collection in 2009 that Whatever was finally included on an album and available digitally for the very first time – it even broke back into the Top 75 that very week. Its sales tally stands at 553,000.

The band’s second Number 1 was their first chart-topper to feature Noel on lead vocals. The chorus’s “So Sally can waaaaait” actually came about by accident. Noel was strumming away singing nothing in particular, when Liam asked him who Sally was, thinking he was singing “So Sally can wait”. Noel liked it so much it became the actual lyrics. And it was a good shout, Don’t Look Back In Anger was the fourth bestselling single of 1996 and has shifted 948,000 copies.

Wonderwall, Noel Gallagher’s love letter to his then girlfriend, is the band’s top seller but never reaching Number 1. According to legend, despite the song’s subject, Liam insisted on singing it – he obviously knew an anthem when he heard one. Trouble was, it was such an anthem that the band eventually got sick of having it sang back to them at concerts. If it’s any comfort to Oasis, it is one of the biggest selling songs of all time.

Wonderwall sold over 140,000 copies in its first week on sale. It finally passed the million mark in 2009. It's shifted 1.34 million copies. Altogether now: “And all the roads we have to walk are wiiiiinding…

What’s happening in the rest of the Top 20?

Just outside the Top 5 is Some Might Say, the lead single from eagerly awaited second album (What's The Story) Morning Glory  gave Oasis their very first chart-topper, ending Take That’s month-long tenure at the top of the Official Singles Chart with Back For Good. Over 464,000 copies were sold, and Oasis’s stint at Number 1 was ended after just one week by a dance classic – Livin Joy’s Dreamer went straight in at the top.

Live Forever was Oasis’s first ever Top 10 single, beginning a run of 22 consecutive Top 10 singles that lasted until 2008, and it makes the Top 10 for them again on their top sellers countdown – it’s at Number 9.

The Top 10 is rounded off by classic singalong and the highest chart peak from Definitely Maybe: Cigarettes & Alcohol. No, it’s not your imaginayeeshaaaaaaaun.

Despite reaching only Number 31 on the Official Singles Chart, the band’s debut single Supersonic makes it into the Official Oasis Top 20 – coming in at Number 14 with over 240,000 copies sold.

Such is the power of Oasis that even a non-single makes an appearance. The classic album track that should’ve been a single, Champagne Supernova, is Oasis’s 16th bestselling song, earning its place on downloads alone – over 235,000 of them, in fact. Bonus fact: Modfather Paul Weller provides some backing vocal and guitar assistance on Champagne Supernova.

Just outside the Top 20, a couple of other album tracks rank pretty high. Half The World Away, used as the theme tune to BBC sitcom The Royle Family, is Oasis’s 22nd top seller and She’s Electric, from (What's the Story) Morning Glory is  behind it at 24.

MORE: We take a look back at Definitely Maybe, the debut Oasis album