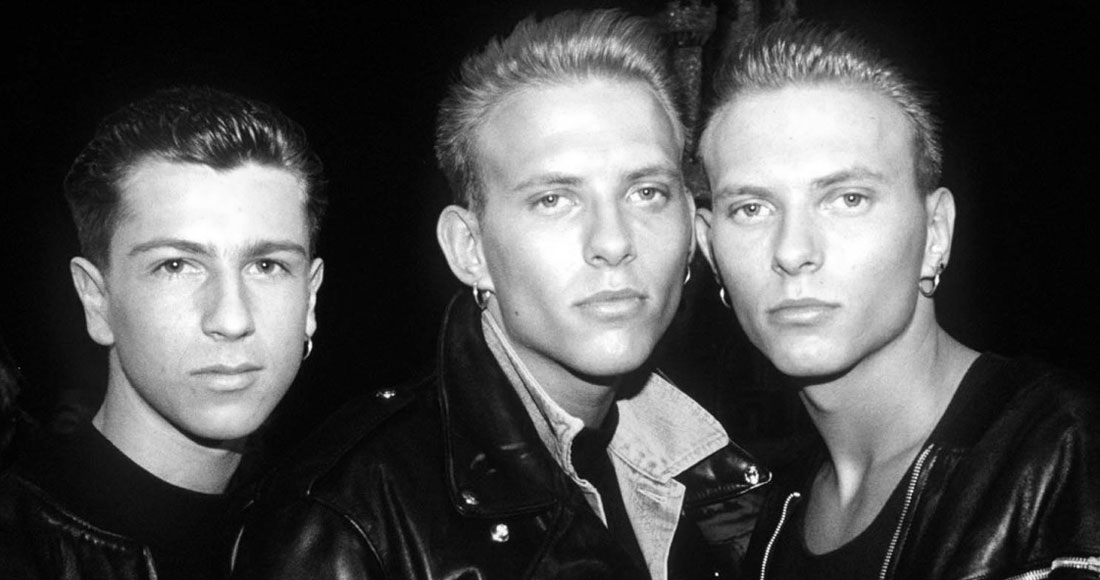 It’s a quarter of a century since the Goss twins (and Craig) had their only Number 1.

They had twins as band members, they had weird shoes with bottle-tops on, and they had a legion of devoted fans known as Brosettes. Yes, it is 25 years since Bros – Matt and Luke Goss and their best friend Craig Logan – hit the Number 1 spot on the Official Singles Chart with the anthem to being rather on the bitter side about a break-up, I Owe You Nothing.

They may have seemed like an overnight success, but I Owe You Nothing had actually been released before – it missed the Top 75 in 1987. On its second outing, however, it followed a pair of Number 2 singles – When Will I Be Famous? and Drop The Boy – and entered the chart in the runner-up spot on 18 June 1988. Could it climb to be their first chart-topper? You betcha. The following week, the trio from Camberley, Surrey sent The Timelords swirling into a vortex back to Number 2, knocking Doctorin’ The Tardis off the top spot and claiming it as their own.

The track remained at the summit of the Official Singles Chart for two weeks, before Hawaiian smoothie Glenn Medeiros zoomed all the way up from Number 11 to grab the top spot with Nothing’s Gonna Change My Love For You.

Bros’s career was fairly short, but their impact was huge. I Owe You Nothing has sold almost 300,000 copies, and their debut album Push spent a year on the Official Albums Chart. I Owe You Nothing was to be their first and final Number 1. Craig Logan – known ‘affectionately’ as ‘Ken’ by much-missed pop bible Smash Hits – decided three was a crowd and quit the band in 1989. Undeterred, the twins Matt and Luke carried on as a duo, managing three more Top 10 hits – Too Much, Chocolate Box and Sister – before calling it a day in 1992.

Matt went on to forge a solo career, finding great success performing in Las Vegas. He’s just signed a new record deal and we should be seeing new material soon.

Luke ditched the drumming to become an actor, and Craig moved into music management. We’ve got our fingers crossed for a reunion one day. Come on, boys, make it happen!

Watch the video for I Owe You Nothing:

Bros - I Owe You Nothing on MUZU.TV.

Elsewhere in our Flashback Top 5, The Timelords – better known as electronic anarchists The KLF – slipped to Number 2 after just one week at the top with Doctorin’ The Tardis, which heavily sampled the Doctor Who theme tune.

Italian disco diva Sabrina propped up the Top 3 with her holiday hit Boys (Summertime Love), reaching its peak position. The fun track’s place in cheesy pop history was assured with its promo video, which featured Sabrina and a few of her decidedly non-ugly pals frolicking around a swimming pool. There were bikinis, wet T-shirts and a flurry of outrage from your grandma. Sabrina only managed one more Top 40 hit on the Official Singles Chart, a Number 25 hit with All Of Me later in 1988.

At Number 4 was the interesting combination of novelty rap act Fat Boys and ‘60s legend Chubby Checker, who got together to perform a riff on Checker’s classic hits The Twist and Let’s Twist Again, with The Twist (Yo Twist). Chubby’s original songs charted in 1960 and 1961 respectively, and it was his first hit since 1975, when he bit Number 5 with – yes, you’ve guessed it – The Twist and Let’s Twist Again. It was Fat Boys’ second Top 10 hit; they’d teamed up with The Beach Boys on a new version of the classic Wipeout the previous summer.

Rounding off the Top 5 was reggae singer Maxi Priest with Wild World. This cover of Cat Stevens’ 1970 track was Maxi’s first Official Singles Chart Top 10 hit. Although Cat didn’t have a hit with the original in the UK, it was swiftly covered by Jimmy Cliff, who took it to Number 8 in August 1970.

Get the full list of Official Chart hits for each of our Top 5 acts:

Catch up with last week’s Official Chart Flashback from 1993. Dreams by Gabrielle.

Listen to the Top 5

Travel back in time with our Spotify and Deezer playlists: