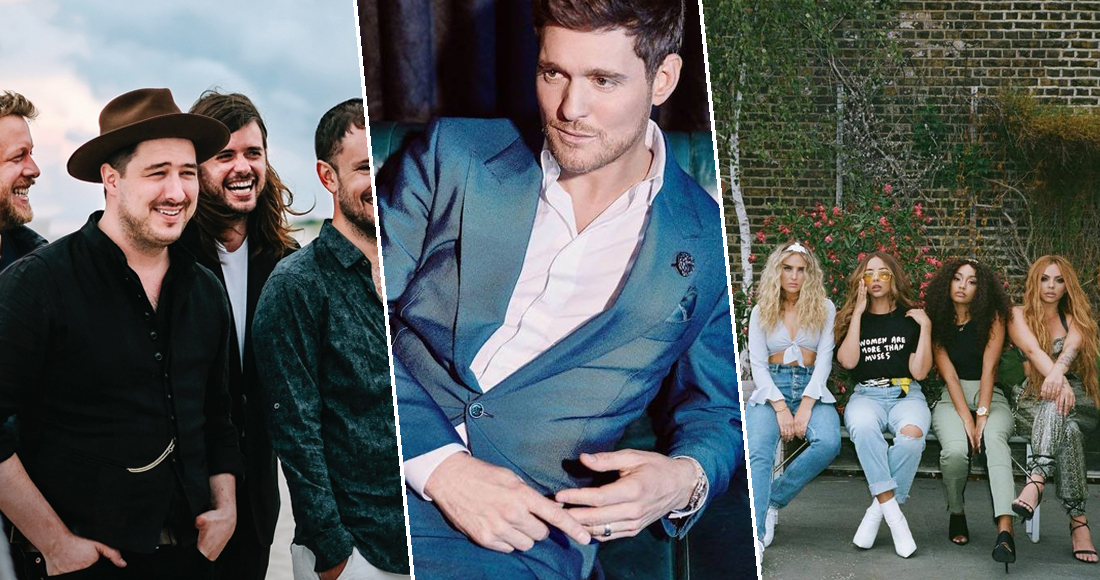 Michael Bublé, Little Mix and Mumford & Sons are battling it out on what is a very close race for Number 1 on this week's Official Albums Chart.

The race is far from over yet: just 6,033 combined sales separate the three albums with four days to go until this week's Official Chart reveal.

If Bublé holds his position, it'll be the singer's fourth chart-topping album in the UK, while it'd be a third for Mumford and a second for Little Mix, should either overtake.

Boyzone are set to go out with a bang as their seventh and final studio album Thank You & Goodnight opens at Number 4. It could be their highest charting record in eight years, since 2010's chart-topping Brother.

Elsewhere, The Beautiful South frontman Paul Heaton is new at 6 with solo album The Last King Of Pop, Mark Knopfler's ninth album Down The Road Wherever starts at 8, and a new Fleetwood Mac boxset 50 Years - Don't Stop is at 9.

Further down, Merrie Land by Damon Albarn-fronted band The Good, The Bad & The Queen opens at 24, a new album of Cilla Black songs re-worked by the Royal Liverpool Philharmonic Orchestra is at 26, and Mariah Carey's 15th studio album Caution is at 31.

Smashing Pumpkins' reunion album Shiny And Oh So Bright - Vol. 1 (32) and part one of Kate Bush's Remastered series (33) are also both on course to land in this week's Official Albums Chart Top 40.

Finally, over on the Official Compilation Albums Chart, The Greatest Showman – Reimagined is on track to debut at Number 1, and is outselling the Top 5 combined.