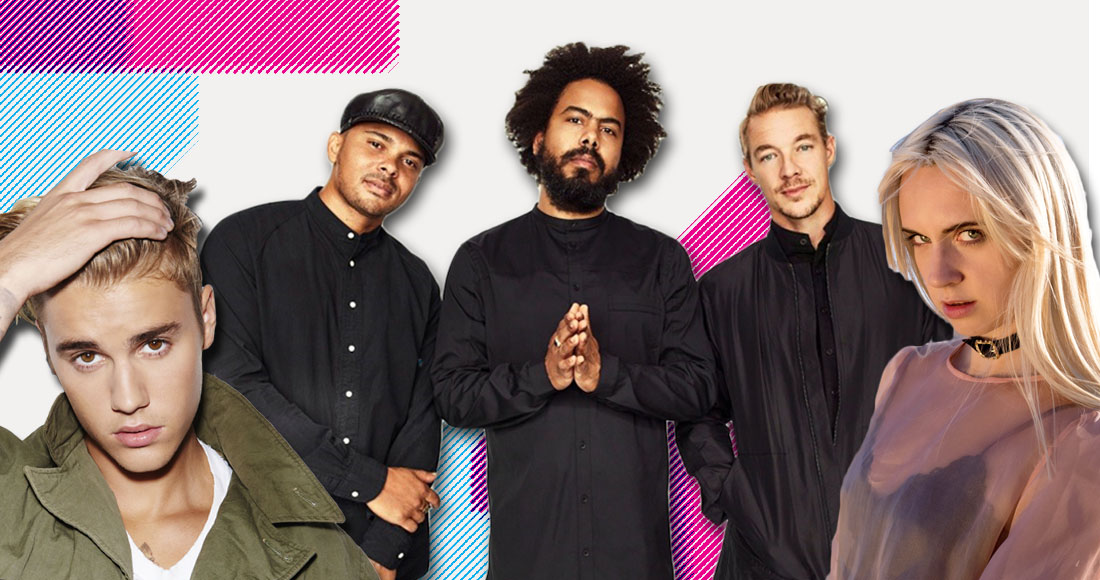 It's happened - Drake is no longer Number 1 on the Official Singles Chart.

Drizzy's 15-week stay at the top spot - the second longest consecutive stint in UK chart history - is over; his Wizkid and Kyla collaboration One Dance has slipped four places and finishes at this week's Number 5.

Our new Number 1 is Cold Water, Major Lazer’s powerhouse collaboration with Justin Bieber and MØ, which notches up 102,000 combined sales to take the top spot, including 5.56 million streams and 47,000 downloads. The track is Major Lazer and MØ's first Number 1 single and Justin's fourth.

On landing their first UK chart-topper, Major Lazer told OfficialCharts.com: "We can't believe we have our first Number 1 and are amazed at the support from the UK and are so thankful for the amazing Because team that we work Major Lazer records with. We have a lot more coming for you this summer!"

Released last Friday (July 22), Cold Water is the second single to shoot straight to Number 1 on the Official Singles Chart this year - Zayn’s debut solo offering Pillowtalk debuted at the top back in February.

In addition to ending Drake's impressive streak at the helm of the Official Singles Chart, Cold Water has made even more history. The Ed Sheeran-penned track marks the first time in UK chart history that two Danish acts have reached Number 1 in the same year, those being MØ and Lukas Graham's 7 Years.

2016 is also the first year that four songs by Canadian artists have hit Number 1: Justin Bieber on Cold Water and Love Yourself, Stitches by Shawn Mendes and Drake's One Dance.

The rest of this week's Top 5 looks like this: Jonas Blue and JP Cooper's Perfect Strangers holds firm at Number 2, Calum Scott's Dancing On My Own climbs one to hit a new peak of Number 3 and The Chainsmokers tumble one spot with Don't Let Me Down.

Bastille's Good Grief is a big climber this week, vaulting to a new peak of 15, up nine places from last week's 24. MØ is back again with her solo hit Final Song which climbs two rungs (17), and she is closely followed by M.O - the girl group's first Top 40 entry Who Do You Think Of rises from 35 to 25.

MORE: M.O on breaking through with Who Do You Think Of?, landing a US record deal and MØ: Interview

Christine and the Queens' Tilted moves two places to a new PB of 27, as does Charlie Puth and Selena Gomez's We Don't Talk Anymore (28). Anne-Marie's Alarm is a new entry in this week's Top 40, up 23 placings to 32, and finally Snakehips' Cruel featuring Zayn floats five places to 33.