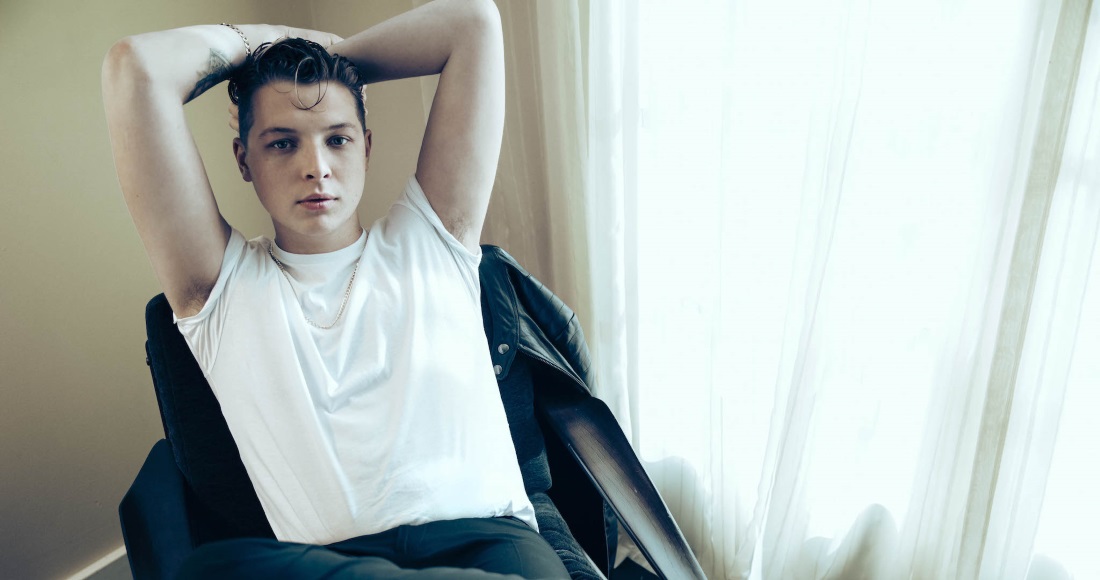 Three years ago, John Newman burst on to the scene thanks to his feature on Rudimental's chart-topping single Feel The Love.

A year later, he followed it up with his own headline Number 1 song Love Me Again and repeated the trick a third time last year with his Calvin Harris collaboration Blame.

Ahead of the release of his brand new track Come And Get It, we phoned up John to find out more about his second album and whether he reckons he's set for another stint at the Official Charts summit.

Hi John! Your new single Come & Get It is released this Friday (July 17). Are you feeling positive about the whole thing?

I’m so nervous! I mean I'm so nervous. Especially as everyone is asking me if I’m feeling the pressure now I’m on to my second album.

Well, you've got quite a big job on your hands, haven’t you?

I ripped my first album to pieces so I could move on and feel confident in what I wanted to do next. I also told the label not to call me, I’m making an album, leave me alone! Until recently I felt confident, but now the single release is coming around, the nerves have kicked in again. I want the success so I can keep making records. As a perfectionist, I can’t think of anything worse than flopping at Number 30 and for my career to slowly decline from there. It would be horrible.

Well fortunately, Come And Get It is a great song and everyone seems to be enjoying it, which is a good sign?

I’m glad because it’s the first single from a new album, but the exciting thing is, I feel more confident about my next single. On the first album, we released Love Me Again first and people were starting to say I might just be a one-hit wonder. Hopefully this time the second single will really hit home.

Lead singles are probably the most important part of an album campaign; who decided to go with Come And Get It over say, what you’ve planned as the next single?

The thing is, there’s a lot of chefs in the kitchen when you’re an artist on a major label. There’s a lot of people involved and everyone wants to cook the dish, and initially I wanted to go with a different song called Lights Down as the lead. My manager then gave me some wise words. He said, ‘How can you decide what goes out first from this record when you’re so close to it?’ and convinced me to change it. I’m so glad I listened to him because it’s a great song and it’s a perfect representation of the rest of the album.

Love Me Again is still a massive song, but do you think its success overshadowed the rest of your last album?

I know what you mean. The thing is, the standard of Love Me Again was so high in terms of me expressing myself, and on the rest of the album I didn’t feel I’d cracked it the same way I’d cracked it on that song. Rather than trying to recreate that song on this new album, I’ve put myself in a similar mind set to the one I had at the time where I was completely free and recorded whatever came out.

In what ways is your new album better than your first album Tribute?

I’m so happy with it! I had to make this record in six months, which really is no time at all for me. I’m genuinely so excited about it; I feel like I’ve fully expressed myself and I’ve made the record I wanted to make. ! I’ve been lucky to work with some of the best musicians in the world on this record.

I’ve done a track called Tiring Game with Charlie Wilson from The Gap Band, who’s done stuff with Kanye and Justin Timberlake’s song Signs. Working in the studio with him was ridiculous. I don’t want to go on about him and disrespect his story about his tough life, but when you get in the studio with him, his positivity is ridiculous. He was an absolute joy to be around, which hopefully comes through in the music.

In what ways is your new album worse than Tribute?

I think I’m still to discover those parts, but I'm sure I will when they come around. There’s nothing obvious at the moment. On the first album, I was rushed into making the artwork and I didn’t like it, but nothing like that has happened yet. I’m sure I’ll know the answer to that when it comes to making the next record and I’m ripping this one apart!

John Newman releases Come And Get It on Friday, July 17.