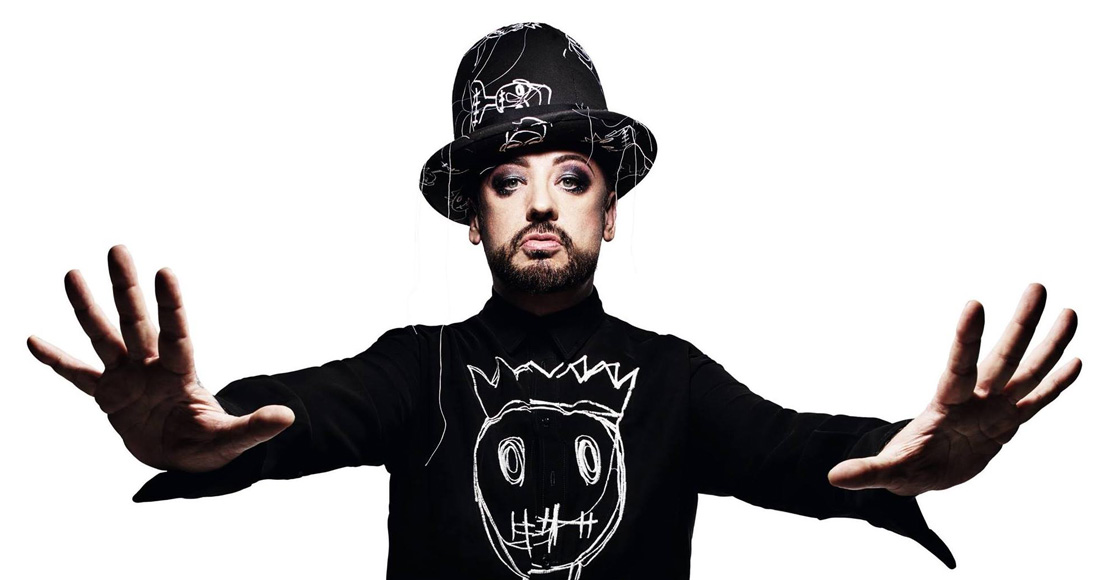 For a band releasing their first album together in almost 20 years, Boy George is almost alarmingly calm. Exactly one week away from its release when we interview him, the Culture Club frontman talks about the record with the kind of casual attitude as though he were ticking it off his weekly to-do list. “I’d make an album every year if I could,” he insists. “I don’t think we do it enough.”

Despite this, the major stumbling block behind a new Culture Club album for the past two decades has been the band themselves. Their famously fiery reputation was plain for all to see when, in 2014, they shot a BBC documentary about their attempt to record an album titled Tribes and embark on a tour. The programme’s title, From Karma to Calamity, tells you all you need to know about what ensued. However, two years later, they pulled themselves together for a world tour, and things have largely been rosy ever since.

“As I get older one of the things that frustrates me more and more is the lack of productivity,” he sighs. “I’m always writing, I’m always recording, so I have to have other avenues where I do things.” To keep his creative muscles working, he’s been writing and producing for other acts in recent years, including synth-pop trio We Are Brando, alongside working on a new Culture Club record. “I really enjoy the creative process and I think most artists will tell you that making things is great; trying to sell them is not so great. I don’t know if I feel pressure, I feel elated.”

The resulting album, called Life, is for the most part classic Culture Club, blending reggae, soul and the occasional ‘70s-inspired disco moment. Like their notable hits Do You Really Want To Hurt Me, Karma Chameleon and I Just Wanna Be Loved, there’s a wistful, happy-sad tone to Life - George describes it as “joy for the cynical”.

After 2016’s Tribes album failed to materialise, did you think that was it as far as new Culture Club music was concerned?

“We started it four years ago, we were recording in Spain, and we had a really great time doing it. I’m kind of really glad that we did it this year because everyone was in such a much better place. The songs were better, the communication was better. We’re really happy that we did it now and not then. I even allowed people to have opinions on this album, which is shocking!

“I mean, my job is lyrics and melodies - I sort of provide the story - so I’ve always been quite protective and a bit precious about that, but on this particular record I was very open to ‘what do you think about this?’ and trying things, which is quite different. If you don’t know me, you’d be alarmed really.” 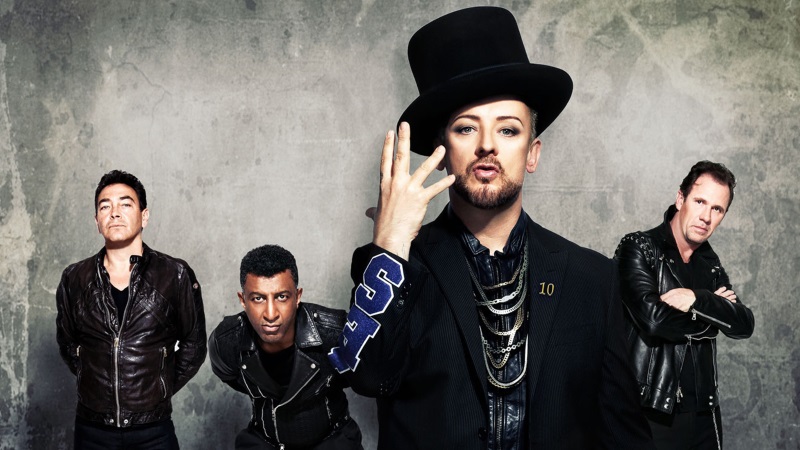 You’ve tested most of the albums tracks while on tour, which seems to have been the thing that’s brought the band back together…

“I think that it’s an individual thing for everybody. Obviously while touring we’ve done a lot of these songs in the last three years. Being able to go back and record a song that you’ve played for the last two years on the road is a luxury. You don’t really get that chance very often, and you’ve already seen what the audience reaction is to the songs.

“There are some songs that are completely different to the original versions. The Truth Is A Runaway Train is originally a Johnny Cash tribute, and now it’s Gladys Knight & The Pips, so things have completely been transformed. Resting Bitch Face was much more rocky, more Stones-y and now it’s gone down a more Bowie Station to Station, soulful funk thing. It’s a luxury to be able to go out there and then go and record them. It’s an interesting way of doing it.”

It’s been 19 years since the last Culture Club album, and your music holds such a special place in many peoples' hearts. Were you feeling the pressure to come up with something just as good?

“I don’t know if I ever feel pressure. Everything’s about live now, it’s all about the live shows. The mistake a lot of artists make is when they do a new song they go, ‘Oh well this is a new song, I’m really sorry!’. We’re not apologetic in any way. I’m not sorry and I don’t say it’s a new song. I say, ‘This is what this song is about’ and I sometimes lie and say, ‘This is a song I wrote with John Lennon’ or I say, ‘I wrote this for Johnny Cas’ and people look really miffed!

“I tell lots of lies on stage. I use lots of surrealism when I’m performing and say things that are completely untrue, like, ‘This is the B-side of I’m Afraid Of Me’ or something and people just go for it. I think our audience is quite open to it. It’s my experience that I’ve been at shows where people have done these things and there’s been kind of a collective sigh, but we don’t seem to get that, and if there are people that aren’t interested then like I say, go to the bar! And they will discover the hard way that’s not where they’ll find the answers.”

There is something very instant and familiar about Life; were you tempted to push the Culture Club sound into new territory?

“I don’t think it was deliberate but I personally as a songwriter grew up listening to lots of types of music, but I grew up listening to melodic songs with a beginning, middle and end. That really influences the way I write, and a lot of music nowadays is not really a song, it’s kind of production over substance. I like lots of new songs, but people write in a very different way now. I’ve been invited into these modern song writing sessions and they’re terrifying. Pop song writing has become quite un-emotional.

“I try to use real-life situations for pretty much everything I do, and if I can’t find a real-life situation I’ll go to a book or something. Things don’t have to make sense but you can make them make sense. Marc Bolan, you know, he sang: ‘I bought a car, it was old, it was kind, it gave my mind and it disappeared’. I listen to a lot of T-rex and think – he was a genius! He was a surrealist poet – if you can make something believable, it’s just what you can get away with.”

Life touches on addiction, domestic violence, dysfunctional relationships, recovery… is this an album of lessons learned in your life?

“I think it’s questions, do you know what I mean? The songs are questions. And I suppose when you’re like 20 you think you’re going to get an answer to those questions but you don’t, and you have to learn you’re never going to get an answer. I’m not looking for answers any more. I suppose being a Gemini I’m always in two minds about everything. I can love and hate something at the same time.”

You’ve always said you’re someone who has faith in humanity; is that really being tested at the moment?

“I don’t think it is really. I’ve always felt like the world growing up was kind of gated. When I was six years old I was called names, so I’ve always been aware of my separate-ness, I’ve always felt like an outsider. But also, the optimism has always been there. I think we do focus so much on what’s wrong with everybody and what’s wrong with ourselves. We don’t spend enough time saying, ‘Actually, there are great people in the world’. It depends on the day! Yesterday I was out getting my hair cut, and I got trapped in Kings Cross station at rush hour, and it was just like “oh my god!!!” and I was phoning everyone going. ‘Communes! It’s the future! Everyone’s going to live in communes!’ and I think that there probably will be a lot of that in the future. I think that I’d quite like to live in a commune for six months. I don’t know how to deal with the world sometimes but then someone will just smile at you randomly in the street and it just lights up your world.

“I think you just have to not focus all the time on what’s wrong with people and what’s wrong with the world. I’ve always been aware of people’s uncomfortable attitudes towards certain things: sexuality, race, all of that stuff. If you're an outsider, the world has always been a scary place - but you're also aware of how gorgeous it can be as well.”

A lot of queer artists are breaking through at the moment. Do you think we’ve come full circle again in where acts like Culture Club pushed for queerness in the mainstream in the ‘80s, this generation is having to do it all over again?

“I think from my point of view, I’ve always loved people with an axe to grind. I think there’s a lot of same-ism going on in the world right now. There’s a lot of people trying to be like everybody else. And for me, there are certain people that really stand out and I’ve always loved those people. I’ve always appreciated people like Chrissy Hynde, people who are a little disgruntled. Very secretly I am one of those people… I think you can get too analytical about these things.

“I actually would say at the moment, what you think is far more interesting to me than what you look like. I love to see anyone dressed up, a big pair of platforms and blue dreadlocks, I love all that, I like anyone that brightens up the horizon. I’m not judgmental about it, there are these young kids who walk around with their noses in the air thinking they’ve invented the wheel and that they’re the first kid to ever wear eyeliner, and there are artists out there who think they invented gay, but I’ve always wanted to live in a world where these things weren’t important. At the same time, they have to be important to stand out. I think I’m always reviewing everything on a minute to minute basis, I’m never really satisfied. Some things excite me and some things I’ve heard before, they don’t really resonate with me.”

As well as a singer-songwriter you’re a respected DJ, author and TV personality. Are you aware you’re veering very close to National Treasure status?

“National treasure, I had a really good line for that but I won’t say it! That would sit in too much of a comfortable area for me. I’d rather be National Wreckage! Not really. I think there is a bit of a responsibility with that but…I don’t know really, that’s a difficult one, there’s part of me that can hear my Mum going, ‘Be proud of yourself!’ and I think there is a point where you’ve got to acknowledge what you’ve done and what you’ve created, but I always feel like there’s other s**t to be done. I’m not someone who rests on my laurels, I don’t want to get bland.”