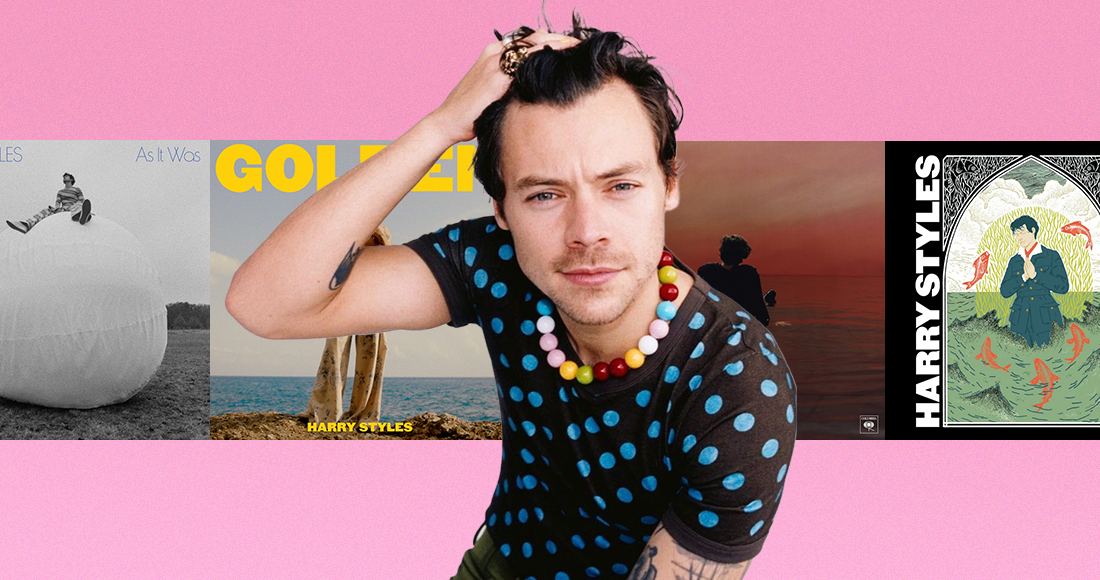 To celebrate the release of Harry Styles' third solo album Harry's House, the Official Charts Company are proud to present the official Top 10 biggest solo singles released by Harry in the UK.

Coming up as a member of One Direction, Harry earned four Number 1 singles and albums apiece - during his time in the band, Harry cultivated an enormous fan base as a teen idol, but his sights always seemed set on solo stardom, and once 1D entered into a hiatus, Harry shed his pin-up skin almost immediately.

Across three albums, Harry has explored various genres (soft rock, psychedelia and on his latest record, post-funk and disco) all the while managing to front-load his own personal experiences and emotions to lend an air of authenticity that has only deepened with each new record.

Of course with just three albums to his name (and with Harry's House only just released) the chart is front-loaded with entries from 2017's self-titled debut and his 2019 sophomore effort Fine Line.

We open with the tender Two Ghosts (10) and the rollicking Kiwi (9), both examples of Harry using his debut era to metamorphosise into a grandiose rock star.

Current single As It Was is right now on a hot-streak of nine consecutive weeks at the top of the Official Singles Chart (beating We Don't Talk About Bruno as the longest-running Number 1 hit of the year so far) and makes an appearance at Number 8, already gaining over 479,000 UK chart sales, with this stat sure to rise in the coming weeks, months and years.

But before we reveal the Top 10 in full below, let's take a closer, in-depth look at the Top 5:

The lead single from Fine Line stepped away from the tender stadium rock of Harry Styles, instead immersing the superstar into the murky world of electronica-influenced synth-pop. Its music video memorably saw a topless Harry dive head-first into a pool of male and female admirers, and its lyrics ("lights out and they know who you are") speak to living life on your terms, and no-one elses.

A break-up ballad in the traditional sense, Falling sees the cheekiness that flows throughout most of Fine Line drop for one moment. Although it never reached the Top 10, Falling has already amassed over 1 million combined chart sales in the UK alone.

A perfectly produced, written and performed pop tune, Adore You is an immaculate show of Harry's showmanship, one of the best post-boyband singles in recent memory. It also showed his weird side brilliantly, with the Dave Meyers-directed video transplanting Harry to the fictional British isle of Eroda, where he befriends a gigantic fish. Despite being Harry's third most successful single in the UK overall, Adore You is more successful on streams, where it's Harry's second most-streamed hit with 151 million streams to its name.

Imagine the pressure Harry must have felt going into the release of his debut single. He needn't have worried, however. Sign Of The Times is an epic, transcendent rock ballad that wears its ode to David Bowie on its sleeve. Harry's first UK Number 1 single, five years on it still remains one of his most confident solo statements.

Cheeky! Innuendo is rife throughout Watermelon Sugar, the song itself a barely-hidden ode to the female orgasm. We told you it was cheeky! Using sumptuous imagery, Watermelon Sugar glides by on its funk-inspired beat. Harry's biggest hit in the UK, it has chart sales over 1.8 million. With 212 million streams, its also Harry's most-streamed song ever too. Although it never reached Number 1 here, it was his first chart-topper in the US and signalled his arrival as a bona fide superstar.