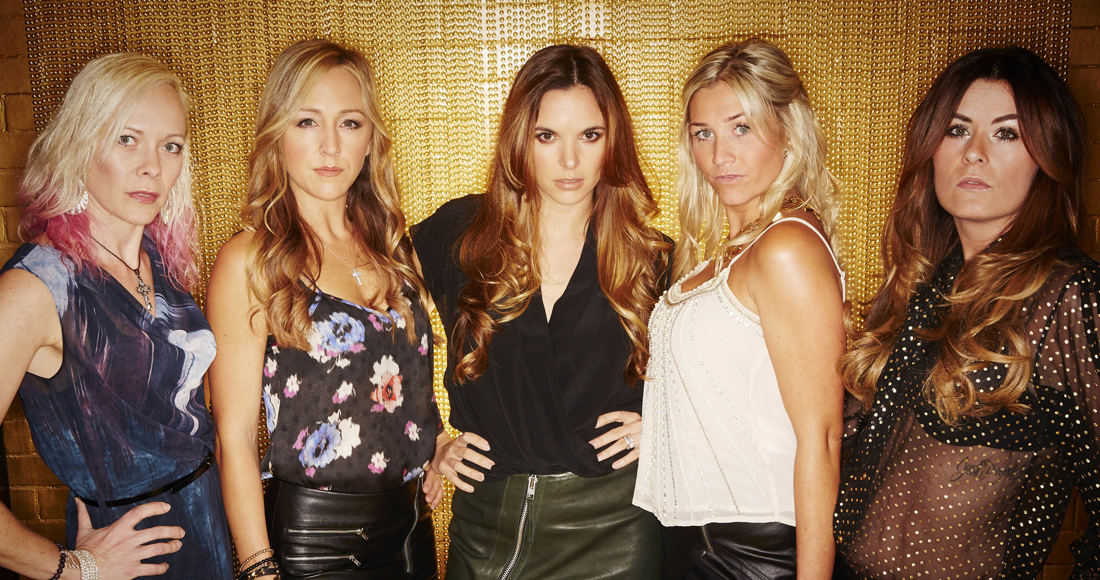 Big Reunion stars Girl Thing lift the lid on their pop career, why they decided it was time to get back together, plus we take a look at what was happening in the charts when their first single came out. Clue: it was a good week to be Kylie.

Girl Thing were Simon Cowell’s first ever girlband launch and originally voiced the million-selling Hear’Say single Pure And Simple. After two Top 40 hits in 2000, including getting to Number 8 with their debut single Last One Standing, the girls parted ways, but now they’re back!

Girl Thing have reformed for the new series of ITV2’s The Big Reunion, the show which brings together popstars of yesteryear to air their grievances and, more importantly, perform together again. We talk to Nikki, Michelle, Linzi, Anika and Jodi to find out how it feels to be back as a fivesome. And we also really need to talk about those outfits from the Last One Standing video, ladies…

How does it feel to be performing together and what were you looking forward to most about it?

Nikki: It felt a bit strange at first but a soon as we went into rehearsals it started to click together quickly. I hoped it would.
Michelle: Fun, it feels good fun actually. It’s nice to be back performing; I think it’s something we’ve all missed.
Jodi: Getting the steps right! It was a bit surreal for us, because we haven’t stood on stage together for 14 years
Anika: Being on stage, that’s what it’s all about. For me, I get butterflies when I’m on the stage and it’s addictive.

Which one of you took most convincing to get back together? Why did you decide to do it?

Nikki: Probably me. I am in the USA most of the time and felt most detached from it. I honestly didn't think anyone would really care about Girl Thing. I decided to do it to enjoy the performances and get some closure on what was a pretty awful time.
Jodi: Nikki definitely was unsure about it. I think we all had certain reservations in our heads. We were all excited, it was more scary to think ‘Do we want to go back there and revisit it?’.

What was it like getting your first Top 10 single?

Nikki: I didn't really celebrate it. We had been hoping for a UK number 1 and were so focused on that. When it didn't happen, everyone involved saw it as a failure.
Michelle: It should have been a buzz. Looking back, I’m quite proud that we had a Top 10 single. At the time it was horrible though, because we were told we were getting a Number 1, there was no contingency plan.
Linzi: It was a disappointment. We were so far away from Number 1, it was nearer Number 10.
Anika: We released in a hard week, we were up against Kylie’s comeback with Spinning Around, so we had tough competition.

Interestingly, fellow Big Reunion participants Damage also released that week – and came higher than Girl Thing. We wondered if that had come up in awkward conversation yet, here's what both bands said on Twitter just now when we alerted them to the fact...

@officialcharts wow - I never realised @OfficialDamage went 1 place ahead of us that week! M x

Speaking of chart positions, how did you feel when Hear’Say took Pure & Simple to Number 1 and made it a million-seller?

Nikki: I was happy for them. They deserved it and were the first of the Pop Idol/X Factor generation that is still here today and going strong. I was more unhappy that our manager at the time decided to manage Hear’Say and dropped us like a ton of bricks. He was the one that played them the song. That wasn't a nice feeling.
Michelle: When they actually took it was when I was most gutted, when we found out it was going to them. It wasn’t them though, when it went to Number 1 it didn’t upset me as much.
Jodi: Watching it at home was pretty gutting. We’d just ended, and I was living back with my parents and watching them on TV was tough, because that was meant to be our last shot. We certainly didn’t blame Hear’Say though.
Linzi: I just didn’t watch the TV. I couldn’t watch it. Any kind of music thing I couldn’t watch it because it made me really upset.

Are you planning on recording new material?

Nikki: Not yet. Let's see how the show goes to start! If the fans want it, maybe we should listen.

Who had the worst outfit in the Last One Standing video?

Nikki: Maybe Michelle. Sorry Michelle! The t-shirt matching the hair wasn't great
Linzi: That would be a toss-up. Mine was pretty bad; I had a helicopter on my hat.
Jodi: Didn’t you have an apron on Anika? Mine wasn’t bad, but you had an apron on.
Anika: The thing was, when we did a video, during all the promotion we did after, we had to wear the same outfit. At one point, I was so bored with my outfit; I ripped my skirt on purpose so I was allowed to wear something else.

On a nostalgia tip, and because it's the one question we love to ask everybody, what was the first single you ever bought?

Nikki: I think it was a Five Star record, Rain Or Shine.
Michelle: Mine’s really sad, it was Kylie & Jason, Especially For You. (Sad?! That's an amazing first record – First Singles Ed)
Jodi: Mine was Kylie too! I Should Be So Lucky.

Who would you most like to see get back together in another series of The Big Reunion?

Nikki: Maybe M People. I've heard their name mentioned. They had great songs.
Michelle: All Saints would have been a good one. NSync were good too.
Jodi: I would love to see All Saints. I think S Club 7 should give it a go, but you need all seven of them to make it work!

Come on S Clubbers, we can make this one happen! We don't want to disappoint Jodi, do we?

Chart story: How Last One Standing did in the Official Singles Chart

Anika’s not wrong when she says there was tough competition for Number 1 the week Last One Standing was released. There were no fewer than five entries in the Top 10 alone when the chart was announced, and all pretty high-profile ones.

The big release that week in 2000 was the comeback of Australian pop princess Kylie Minogue. Hard to believe now, but Kylie hadn’t hit the Top 10 since her first non-PWL single Confide In Me, six years earlier, in September 1994, and her last Number 1 had been 1990’s Tears On My Pillow. All eyes were on Kylie to see whether she could pull it off, and she certainly did. Spinning Around went straight in at Number 1 with first-week sales of over 80,000. It’s sold 300,000 copies altogether.

Also making its first showing that week on the Official Singles Chart was David Gray’s big hit Babylon at Number 5. It would peak no higher and spent nine weeks on the Top 40.

Frankie Goes To Hollywood’s The Power Of Love was back in the Top 10 for a third time this week, too. After hitting Number 1 in 1984, it was back for another stint in 1993, landing at Number 10. Here, a remix charted at Number 6. Clearly, it’s a record to be reckoned with.

R&B boyband Damage may now be big mates with Girl Thing on The Big Reunion, but back in 2000 they were chart rivals. That week, they released Ghetto Romance, landing at Number 7 – one place ahead of Girl Thing. Awks. It was the group’s fourth, and final, Top 10 hit.

So Last One Standing entered at Number 8, meaning that Girl Thing would have to settle for a Top 10 and not a Number 1.

Number 8 isn’t so bad, though.

Other big songs that made it no further than 8th place include Michael Jackson’s Wanna Be Startin’ Something in 1983, Bananarama’s Venus in 1986 and Yesterday by the Beatles in 1976 (yes, 1976 – it wasn't released until a single until then, amazingly).

Watch Kylie's Number 1 single Spinning Around before we reveal the full Top 10 from 25 June 2000: