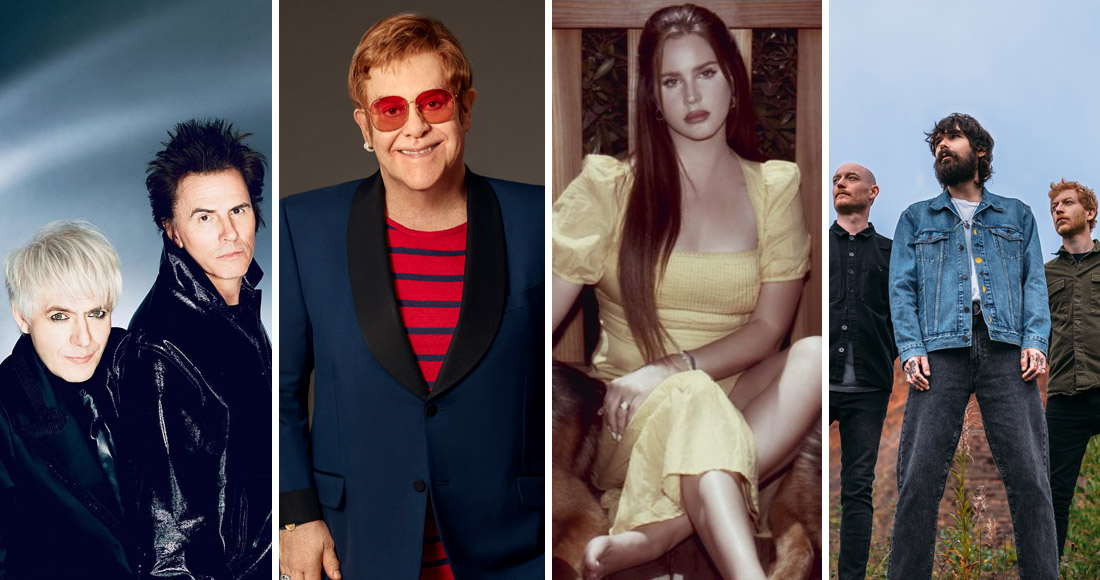 Four chart titans are battling it out for Number 1 on this week’s Official Albums Chart.

Leading the race on today’s Official Chart Update is Elton John, whose new record The Lockdown Sessions is at Number 1 – though it’s still all to play for as just 4,500 chart sales currently separate the Top 4.

Elton’s 32nd studio album - a collection of collaborations with the likes of Stevie Wonder, Lil Nas X and Dua Lipa, the latter on the Number 1 single Cold Heat (Pnau Remix) – could become his eighth chart-topping album. If it holds on, it will be his first leader in nine years, since 2012’s Good Morning To The Night. View Elton’s Official UK Chart history in full here.

Chasing Elton are Duran Duran, whose first album in six years Future Past is at Number 2 – potentially on its way to become their highest-charting record in 38 years, since 1983’s chart-topping Seven And The Ragged Tiger.

Opening at Number 3 is Lana Del Rey with Blue Banisters, her eighth record and second LP in 2021, while Scottish rockers Biffy Clyro sit at Number 4 with The Myth Of The Happily Ever After. Last week’s Number 1, Coldplay’s Music Of The Spheres, drops to Number 5 but continues to lead the way on streaming.

Four more new releases could land in this week’s Top 10; including a 40th anniversary reissue of The Rolling Stones’ Tattoo You (7), Prioritise Pleasure by Self Esteem (8), and A View From The Top Of The World by US prog-metal band Dream Theater (9).

Further down, more new releases aiming for a Top 40 debut are Existence Is Futile by British metal band Cradle Of Filth (25), Every Time I Die’s ninth album Radical (26), and John Coltrane live album A Love Supreme (27).