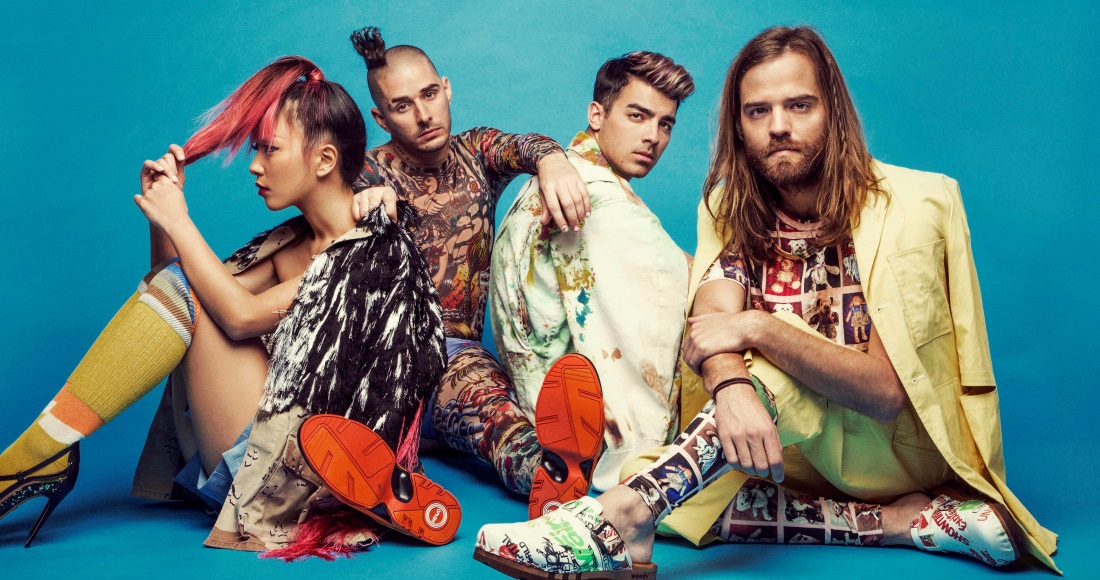 In the midst of a pop landscape largely dominated by sincere and sombre tunes of late, DNCE are like a big, warm, welcoming hug.

Leading the quartet is Joe Jonas, who's roped in two of his former Jonas Brothers tour band members JinJoo Lee and Jack Lawless and former Semi Precious Weapons bassist Cole Whittle to form a band who all about having fun - the results of which you can hear on their debut single Cake By The Ocean.

With the track now having reached just about every corner of the planet, we sat down with the group (minus JinJoo, who was off sick) to talk about cake (obviously), working with "pop god" Max Martin on their debut album and loads more...

Hello DNCE! We haven’t had a successful mixed-sex pop group for ages now. How have you managed it over everyone else?

Joe: I know right? Was S Club 7 the last? That was a long time ago. I’m glad people seem to be connecting with us - I think it’s because there’s a lot of freedom associated with us, and the music is fun. We take music very seriously, but everything else is just creative, wild and fun – the things people relate to when they just want to have a good time. That’s what we bring to the table.

Pop music has been a bit serious of late, hasn’t it?

Joe: I think it is very serious at the moment. I think of lot artists are… I dunno, that’s been done a lot recently, so hopefully we’re bringing something different and fun that people don’t have to take too seriously.

You’ve all come from various different bands/musical backgrounds. Why did you decide to form the band? And did any of you have reservations about doing it?

Cole: We’re all big believers in whatever the universe wants to happen, will happen. To be honest, it’s like the four of us were walking down four different streets and we ran into each other head-first. That was the beginning of the band.

Joe: We were all 100% up for it. Everything about it immediately felt right. Even with Cake By The Ocean, we tried to beat it and had no idea whether people would get it, but it just felt right to be the lead single, and people seem to be loving it.

Joe - have you felt anyone try to write off the band because of your Jonas Brother past?

Joe: I can thank Nick a lot for setting the tone. There were a lot of haters sitting back thinking we couldn’t do things by ourselves, but Nick has really paved the way for us to have this great song out there. We don’t seem to be getting much of a negative reaction yet. I think having that core, strong relationship with my brother helps a lot – we can lean on each other and jump ideas off one another. There’s no competition, just support.

For people who are only familiar with Cake By The Ocean, explain what DNCE stands for musically?

Cole: Musically, we sound like disco funk hits played by a good garage band. Aesthetically, we’re all such different characters, but it could only be the four of us in this band, and that’s what people react to. Everyone identifies with one of us in some way… we’re like the X-men or something.

What are your special powers?

Cole: Joe can balance everything in this room on his nose. Let’s not prove that now though.

Cake By The Ocean has been a massive worldwide hit; the pressure must now be on to top it?

Joe: I think if you try to better yourself like that you’ll drive yourself crazy. We’re going to release more singles and whether do better or worse than Cake By The Ocean, we’ll still be happy because we’re proud of the music we’ve created. The fan base is growing and we have a lot of music in us to write.

Cake is an important part of our diet in the UK; what’s your preference?

Joe: I’m a big red velvet fan. I didn’t always, but as I’ve grown up I’ve come to love it. We need to find a good cake shop out here.

Joe: We met Paul Hollywood from the [Great British] Bake Off yesterday. He’s a handsome guy.

A lot of people have discovered you via 'new music' playlists on things like Spotify. Streaming plays a big part in a song’s success these days, meaning high replay value is in some ways more important than it used to be. Does that affect how you approach songwriting?

Cole: Speaking as people who have written a lot of songs, you tend to self-edit quite a lot without realising. I don’t think we sit there and try and think of something catchy, you think of what’s right for the song. If you follow that, songs like Cake By The Ocean happen, but if you try and force or over-think it, there’s a chance the great stuff gets lost.

Joe: I’ve personally found it a lot easier to discover new music these days. A big way we were heard first by a lot of people was by being added to a bunch of ‘new music’ playlists. We didn’t really use press to explain the band. Fast-forward six months later, and the song has become a hit.

You’re working on your debut album; is the rest as fun as Cake By The Ocean?

Joe: There’s more of a balance on the album. There’s some serious stuff on there, but nothing dark or regretful. Some of the slower songs are hopeful, or they're telling a sad but beautiful story. It goes in waves, but I think there’s more positive, upbeat party songs than sad ones. Ultimately I think it’s nice to have that shift in there.

Do you look to any specific artists or your favourite songs or albums for inspiration when making music?

Joe: Honestly, Prince is massive influence on our sound. Throughout our music, and creating this album of funk-inspired stuff, he’s been a huge influence on that - and we’ve been playing his songs on tour for a while now. Also bands like Sly And The Family Stone right through to the Bee Gees…whether it’s melodically or the way they use a guitar… they don’t worry about how long a song is!

Who have you been working with on the album?

Joe: We’ve worked a bit with Max Martin’s team in LA – they just know pop music really well. Pushing each other and them pushing us has hopefully created something really unique.

Did you get to work with Max himself as well?

Joe: Oh yes. It’s funny with him – you’ll be working on a song and he’ll peek his head in and ask, ‘can I listen?’, and we’ll be like ‘Oh s**t’. He’ll listen to what you’ve done and suggest the tiniest tweak in the way you sing a line, and it’ll make it amazing. He’s incredible – and it’s not just because he’s Max Martin – he just knows what he’s talking about. He's like a pop god.

We also worked with Justin Tranter, who Cole used to be in a band with (Semi Precious Weapons). He’s got such a good head on his shoulders creatively. He thinks outside the box and pushes you as a writer not to care too much and overthink what you’ve written.

You’ve already released your Swaay EP, but when are we going to get the full album?

We’re going to release the album – it’ll be a ‘complete my album’ (including the EP songs) - coming out in August. Probably ten more songs, plus extra songs for different movies that we’re going to be in. Any break we have, we still write and record some music. We’re really excited to share what we’ve been working on. We’re always chasing the next thing.

DNCE's Cake By The Ocean is off of their debut EP Swaay, which is out now.