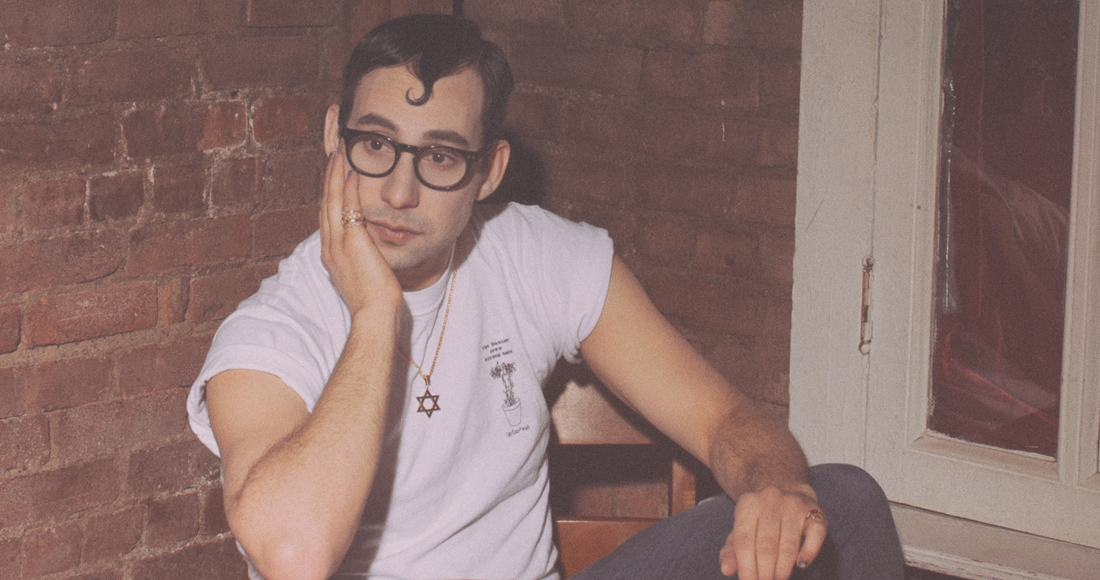 Jack Antonoff, aka Bleachers, is quickly establishing himself as a master of pop production.

As well as turning out a pair of global smashes as part of US band fun. in 2011, the 33-year-old New Jersey musician was heavily involved in Taylor Swift's 1989 album and recently co-exec produced Lorde's new record, Melodrama.

Now, he's on to his second proper album under the guise of Bleachers. Called Gone Now, it's a brilliant collection of nostalgia-tinged synthpop about love, loss and generally the struggle we all share of getting through life.

When we meet Jack in a central London hotel for our interview, it quickly becomes apparent that he likes to talk. A lot, and quickly. One of those people who rambles intelligently, compressing lots of different thoughts and ideas into a few sentences, then gets distracted, before eventually weaving his way back to his original point.

Below are the best bits from our chat, including how he stepped things up on Gone Now and why he's proud to wave the flag for 'intelligent pop music'. Here's what Jack had to say...

On feeling more confident making Gone Now and why it’s better than his last album:

“I see everything as like a big funnel - things aren’t very separate to me. So when I was making this album I felt like I’d done all these things and I’d developed all of these different sorts of feelings and I just wanted to make something that so deeply just sounded like my heart, just like everything in one.

“It’s the first body of work that’s a little more outward leaning in the sense that the first Bleachers record, a lot of the stuff that I’d written in the past would be almost like diary entries, very just like, here’s the exact stories, little hand writing and the landscape that goes with it. This was way more about taking those stories and those themes of loss and figuring out a way to move on and making them about what I see in other people also.”

On the “huge thematic shift” in his sound:

Have you heard the song on the album called Everybody Lost Somebody? That was one of the first songs that I wrote [for this album] that was a very important one. I was just walking down the street in my neighbourhood and everything is big and bright and there’s all these people. You sort of start to hone in and look at people and realise everyone sort of carries this pain with them, all different kinds of things.

"That was a big turning point for the album, whereas a lot of my past work had been, here’s what I’ve been through, here’s who I know that’s dead, here’s what I struggle with, these are my stories. And this one was way more sort of connecting the dots that we all have a version of this story, like you guys are probably thinking of your version right now, like everybody’s lost somebody.

“I think that’s the connective tissue of why we sort of choose to push on and not, like, hurl ourselves into traffic. You know it’s that we’re all functioning, especially nowadays when it’s important to find threads that are connecting us as we feel more and more disconnected. And I think that’s our biggest connective tissue is that we all carry something. So that’s a huge thematic shift for me.”

On the best song on Gone Now:

“Honestly, all of them, because I worked on every single one until I had that feeling. With the song All My Heroes, I felt a lot that I was coming to a certain age where everything was sort of like getting rusty all around me, everything that I believed in was coming up weird. It’s essentially about investing in the people you love. A line in the song goes, 'When all your heroes get tired I’ll be something better yet' so, that’s a big theme on the album."

“It’s just like deep disappointment in the world and this deep reinvestment in the people close to you. That was one of those songs where I feel like you could hear the experimentation in the recording. You hear the synths changing, you hear the weird loopy beat, you can hear me talking and recording and it sounds exactly like it was to make it.”

On being busy (or not, as it turns out) working with huge popstars:

“The funny thing is I don’t actually do that much, I just think it just seems that way because a lot of those things get a lot of attention. A lot of my friends who are artists or producers or writers, they do like two sessions a day. For the past two years I’ve mostly done the Bleachers album and then I also made the Lorde album during that time and two other things that I’m not going to talk about yet. I think it’s just because for some reason if I do things there’s a lot of chatter about them.

“I also work really well on tour which I think is a funny thing. A lot of artists have a hard time with that. I love it - I love being on tour - it gives me a whole different perspective. Like in my room, even right now, like I’m just in my room working on songs. It’s so nice to just go all over the world but then zero back into this place, it’s almost like meditative. I don’t know.”

On the importance of intelligent pop music:

I really believe in it, I believe in it so much I think it makes people feel so unseen when you assume that they need a dumb version of something. It’s simply not true.

On working with Lorde, Taylor Swift and Carly Rae Jepsen, and whether he’s forming an ‘intelligent pop collective’:

“Not intentionally. I started working with Lorde maybe like two years ago and we did all her album together and she helped me with Don’t Take The Money. I mean, the true story with my albums is that I just sat in a room alone and it’s really the sound of a man going crazy in his room, but there’s people that share the same opinion as me of not being afraid of mainstream and pop and things like that and not if it must be less-than or stupid.

“Assuming that people can be, the truth is that people are smart and when we assume that they’re not smart, nobody wins. So, you attach yourself to those people because you don’t meet tonnes and tonnes of them.

“I think Carly Rae Jepsen is really cresting, and is just doing wonderful work. And I’ve always been a massive Robyn fan even though she hasn’t put anything new out in a while I think she’s a real hero of the genre. I've been working on stuff [with Carly]. We’ve been working on a new album, it’s very exciting.”