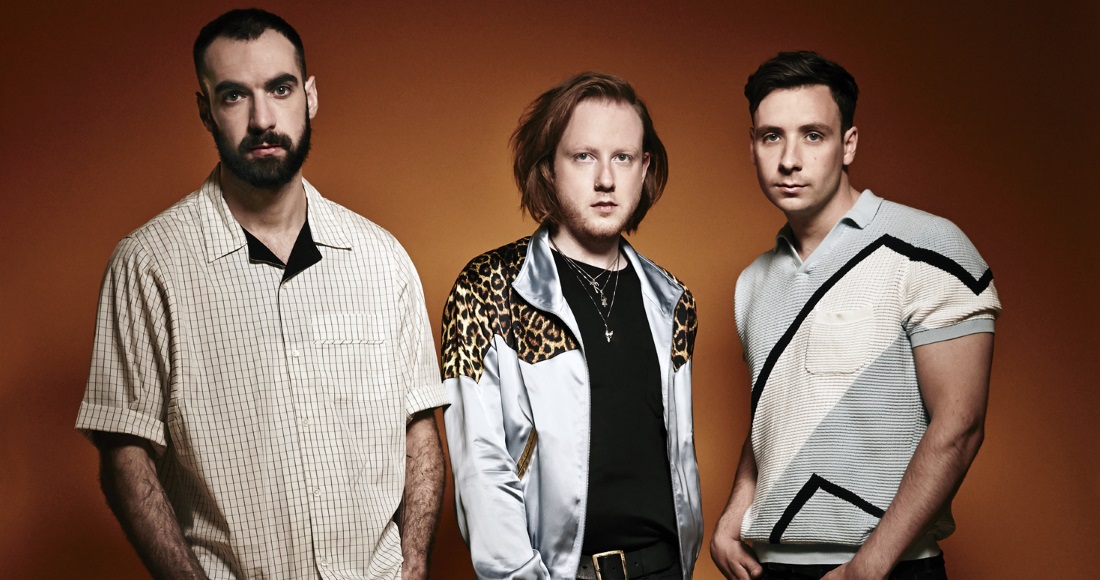 The Northern Irish three-piece ended their last tour not speaking to one another, an "inescapable cycle" they "don't look back on fondly". After taking a break from the business - one brought on by frontman Alex Trimble being taken into hospital - the band picked up the pieces and have produced their most daring album yet which pushes more boundaries than ever before.

OfficialCharts.com sat down with Alex and Sam from the band to learn more about the inspirations behind Gameshow, shocking people with their new music and fond memories of The Generation Game.

Like your last album Beacon, Gameshow was made in LA with producer Jackknife Lee. While the set-up was the same, the sound has definitely evolved. What direction did you want to take for this album?

Alex: "There was a different feeling this time around. We were willing to take more chances and try things that were a little more different, more so than we ever had done before. We had taken quite a long break and that fed the record really – we had to recollect after living a whirlwind life really for the past five years. There was a lot of discovery. We turned up in the studio with a freshness and a new, better attitude and a lot more confidence."

Did pushing the boat out help making this album more enjoyable?

Alex: "Definitely. For me it was most enjoyable for sure. I mean, with the first album we were just kids and didn’t know what we were doing so handed everything over to Elliot James, the producer and let him take the reins.

"The second record, personally and inter-personally, we weren’t in a great place. I don’t look back on that period too fondly whereas this time we were fresh and had the right attitude."

Alex, you've said before that Prince and David Bowie were big influences on this album. How did they inspire you?

Alex: "It was the way they did things. Their invention and willingness to try anything, their experimentation, their total lack of fear but their total commitment to their art and their entertainment at the same time has fascinated me my whole life. This time around we grew the balls to take some of those chances ourselves."

We hear Madonna has also inspired some of the new album. We bet your fans aren't expecting to hear that!

Alex: "It’s like that early Madonna with Like A Virgin and her self-titled album. We’re fascinated by that era sonically; synthesizers started to become really usable and sound really good. People were really starting to use things like drum machines and programming and sequencing. I’m a total nerd when it comes to electronics, synthesizers and stuff like that and our producer Jackknife Lee is exactly the same."

What else do you think will shock people about Gameshow?

Sam: "I wouldn’t have expected us to do this based on what we have done before but it’s fun. I think people love all types of music and I hope they can like what we put together as a band."

Alex: "It goes in so many different places and people may be surprised by some of the directions we’ve taken but I would like to think that anyone who knows us would be able to find something in there that they could grab onto and hopefully that can lead them into the rest of the album."

You were originally labelled as an indie band, but you're more electronic now, aren't you?

Sam: "We were thrown into the Kitsuné [the band’s record label] electronic world when we signed with them and at the very beginning, we didn’t have a drummer so we were relying on electronics a little more – almost as a fourth band member for us at the start. Although we didn’t utilise it as much as we could have to push is into that electronic world, we were trying to just make the drum machine sound like a drummer!

"Now we’ve lived in that world of loving that style of music more and have a drummer live, we’ve learned to like those electronics more and experiment within the electronic world."

This album sounds very eclectic thanks to your influences. Do its title and its balls-to-the-wall tunes take any inspiration from actual gameshows? They tend to be pretty loud and bold, don't they?

Alex: "That’s one aspect of it because that’s how it all appears on television. The idea of me being in a gameshow would make me totally uncomfortable so there’s an element of that in there as well. Being put through the motions and jumping through hoops, having to play the game – there’s that in there too. That’s what happened in our lives over the past 7 or 8 years. It’s not always as enjoyable as it seems. But saying that, it’s still a dream and an amazing life to lead. That was the idea that was touched upon in the lyric for the song Gameshow so when we were discussing the album title, that message struck a chord with everyone."

Sam: "It certainly resonated with us and how we want to treat our careers moving forward, a project rather than our lives. We want to take it as it is and enjoy it rather than getting stressed out by everything. That reflected in the music as well. Being away from Two Door Cinema Club for so long, it allowed us to separate and return as just three guys who want to make a really cool album."

Talking of that time away, you guys didn’t speak for six months after Beacon’s campaign ended, right? How important was that time apart?

Sam: "Whenever we made Beacon, we don’t think anyone was really inspired to go and make an album. Everyone was a bit knackered. I think you have to have time away though to want to do it. As fun as making a record sounds and is, you don’t want it to feel like work. You have to come back to something with a fresh perspective."

Alex: "It is an almost inescapable cycle that bands and we still do get caught up in. You get stuck travelling in your own momentum and it is so hard to leap out of that. It was strange. We were almost following our own success. We toured a lot before we released the first album and then after that and it took a long time for anyone to notice the first album. We were about to start album two and then the first one blew up!

"We were exhausted and we had to put out another album but weren’t in the right place to do that. It was going through the motions and there wasn’t as much passion or drive. We were doing it because we felt we had to. It is really hard for bands to pull out when it gets like that and address it. It ended up with me in hospital – that was the wake-up call. Like you said, we didn't talk. We weren’t talking on tour for the last while. When you spend 24/7 with each other and cabin fever sets in, the smallest little thing will piss you off. It had to come to breaking point for us to come up with a different approach."

Did your break give you all a creative advantage? Or do you prefer writing together?

Alex: "I set the guitar down for a good while. I was physically ill and mentally shot. A very strange thing happens after living that crazy life for so long and then it stops and there’s nothing. Nowhere to go and no-one to see. It wasn’t a good place at first but after a while, we all started writing things. For me personally, I wasn’t writing anything in particular but for the fun of it. After a while, there were the pieces there to put together with each other."

We’ve seen you’re on the FIFA 17 soundtrack so if there was any doubt beforehand, you’ve definitely made it! How does a deal like that come about? Do EA Games just slide into your DMs?

Sam: "We’ve been on them before and we’ve realised over the years how big of an effect that has. People come to shows, especially in America just because we were on an NBA game. It is so powerful because you can sit for hours on those games and the songs infiltrate your mind. We played them an early version [of Are We Ready (Wreck)] and asked if they could save us a space."

Finally, if you were to sit down and watch any gameshow in your free time, what would you choose and why?

Alex: "Good question! The Generation Game was my childhood. Actually, we were in Japan recently and you can always find some ridiculous, colourful, insane gameshow happening on TV – those are fun to watch even if you don’t know what’s going on!"