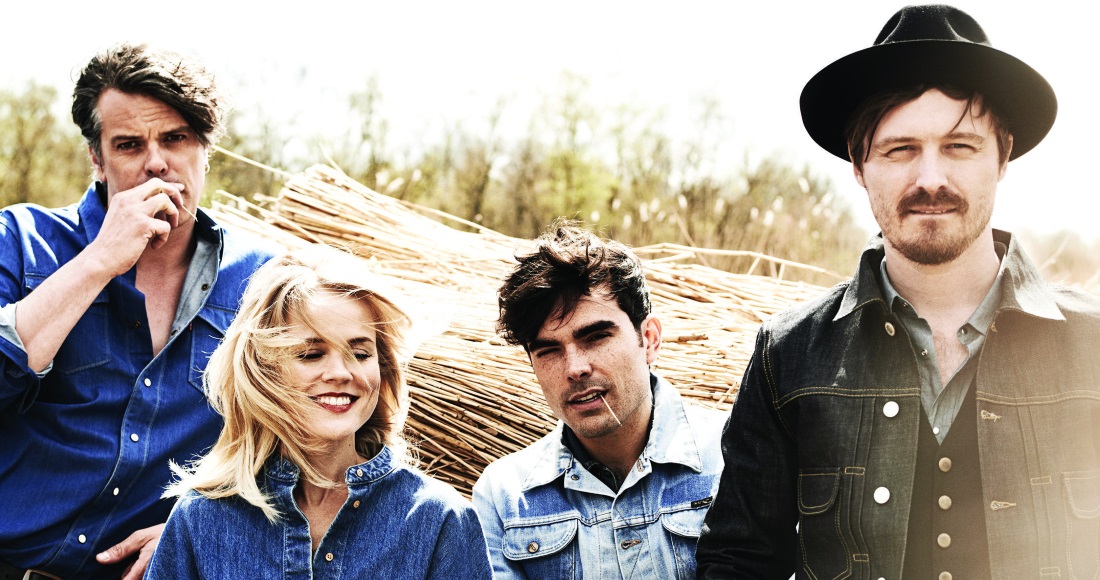 On UK soil, The Common Linnets are best known for one of the most credible Eurovision entries in recent history, Calm After The Storm, which finished second place to Conchita Wurst in 2014 and even managed to crack the UK Top 10.

Fast-forward nearly two years, and the Americana band have two Dutch Number 1 albums to their name, plus a European Border Breaker Award for good measure.

In the run up to the UK's Country 2 Country festival, which takes place in London on March 11-12 (stay tuned to OfficialCharts.com where we'll be revealing the biggest country sellers in the UK), we caught up with singer/The Voice Of Holland coach Ilse DeLange and fellow band member JB Meijers to talk about Eurovision's double-edged sword and the evolution of their sound ahead of the UK release of their new album II.

A lot has changed for The Common Linnets since Calm After The Storm cracked the UK Top 10 after Eurovision 2014, hasn't it?

Ilse: One of the biggest changes that people will experience is that all of the songwriters in the band from the first record became the artists, so now we’re a visible band together instead of the image that people saw on Eurovision, of me and Waylon [who has since left the project to pursue solo projects]. That absolutely was a big change and has a big impact on the second album. There is more diversity in voices; we all sing, we all play and we have great fun doing that. I think you can tell too when we play live – we have a great chemistry together.

JB: A lot of roots stuff on the second record is rootsier and the pop elements are poppier than the first. The spectrum has broadened on the second album. The first album was set out to be more of a country record and the second is step further away from that.

Many UK fans will have been introduced to your work from Eurovision. What doors, if any, opened as a result of taking part in the competition?

JB: It opened many, many doors, from abroad mainly. In Holland, me and Ilse had our own thing going on so the difference was handling the phone calls coming from different territories. It gave us the opportunity to travel more which has been phenomenal. The lowdown is we’re sat in London now doing an interview, which wouldn’t have been possible before. You can’t measure the legacy that Eurovision has left on us. It has changed so many things for us. I still can’t fathom the size of Calm After The Storm. I did my Googling!

Ilse: For me personally, with every solo record (Ilse has seven past studio albums to her name) I’ve tried to get something going on outside of Holland. Despite being first signed in Nashville – my career is so weird, man! It never really worked out. All of a sudden, there is demand and that has been such a wonderful development. It was something I always wanted; I wasn’t sad that it never has happened, I just accepted that it probably wasn’t in the cards for me. When it does happen, it is such an awesome moment and quite emotional. You can’t dream for a better beginning for a new band than Eurovision.

As well as gaining a profile across Europe, you must have experienced a decent uplift in your home country as well?

Ilse: Absolutely! When we went to the [Eurovision], a big majority of the country booed the song because they thought it was kinda lame and totally not what Eurovision is about. That was what we thought was our strong point – that it would make a contrast with everything else, and in the end it played out that way. From then, you go from everyone booing you to everyone knowing already that it was a great idea to be doing that song! Apparently, a hit has lots of fathers and a failure is always an orphan; that definitely applies to us!

JB: It went from, ‘this is sh*t’ to, ‘hey, we always thought this was the greatest thing ever!’ What happens nowadays is that no-one dares criticise the entries…

Ilse: As everyone was so wrong about us! [laughs] We’re just enjoying the ride though and I’m so glad we took that leap.

Did your taking part in Eurovision hinder or change peoples' perceptions of you in any way?

Ilse: I think that is always the case. With something that is so outspoken like Eurovision, when we want to play the cool festivals in Europe, it still has a stigma. We have noticed that there is some hesitance, despite us being nothing further from stereotypical. Still the stigma sticks a bit in a way that the serious, depressing-looking music lovers don’t want to embrace that because they think it is too commercial. It’s like, ‘computer says no!’ [laughs]. We’re not holding back however that we’re totally proud to have been a part of Eurovision.

JB: When Eurovision first started, it was all about the songs and spawned some classics… then it turned a little bit weird. Who is to say it can’t change back to being about good songs?

Ilse: If we have had the smallest part in changing it back, then that would make me very proud.

Let’s talk about the new album, II. You mentioned songwriters coming from the background into the forefront, but in what other ways has the sound of the band evolved?

Ilse: Texture-wise things have changed, some songs are a little grittier, the guitar sounds are a little less smooth. It is a little more in your face.

JB: Because songs were coming from a more edgy angle – topic wise and music wise – we decided to freeze the team that we did the first album with. We thought it would be a great idea to take these different songs, different singers and different angle and mould it in the same biosphere.

Ilse: Biosphere?! I never thought that word would end up in any interview I would be a part of! [laughs]

JB: It’s like we’ve grown potatoes in our greenhouse and now we’re getting bell peppers!

What are some of your personal favourite tracks from II?

Ilse: I love We Don’t Make The Wind Blow. Love it. Every time we play I just feel so cool! It sits so well with our voices, it blends so well, everybody sings. As If Only too – that’s me in my own little… biosphere! I like just closing my eyes and feeling that beat and just taking it somewhere else for just a little moment. I’m very proud of this whole record.

JB: I like As If Only as I don’t know where that came from!

Ilse: I must say that what I really, really like about The Voice Kids is that these kids just love to sing, period. There’s not so much weight on the outcome because to them, it’s in the joy of making music. In the adult version, these people put a lot of pressure on themselves. I’ve had wonderful experiences with the regular Voice but The Voice Kids, it’s all about the fun and the pleasure, and the love of music. I must say that I really enjoyed that change because that’s how I feel about music.

And what about plans for some UK shows from the band?

Ilse: We so badly want to! We’re looking to do a couple of acoustic things. We hope to make it happen!