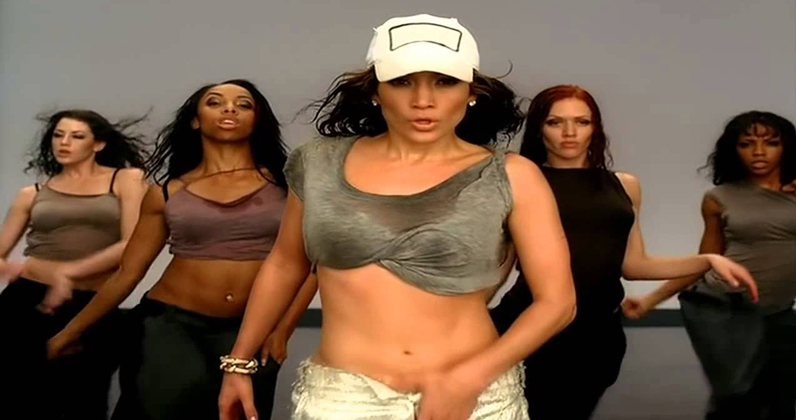 As Jennifer Lopez proved in her recent Super Bowl Halftime Show, Get Right is the overlooked jewel in her singles catalogue. Often forgotten, but the second those jazz horns – a sample of Soul Power 74 by Maceo and the Macks – kick in, it’s near-impossible to resist.

After a two-year career break following the demise of her relationship with Ben Affleck, Get Right, which debuted at Number 1 on the Official UK Singles Chart 15 years ago this week, was Jennifer making a statement after 2002’s mild-mannered, Affleck-inspired This Is Me… Then album. By contrast, Get Right is J-Lo on laser focus, executed with almost ruthless precision.

With R&B-pop dominating in the mid-2000s, A-listers had to hustle extra hard for hits from big-name producers. One such person was Rich Harrison, who had opted to give mega-hit-in-waiting 1 Thing to Amerie over Jennifer. Get Right began life as a song for Usher – it was called Ride and had different lyrics but the horn track and vocal guidelines were in place. Usher is credited as a co-writer on the song, reportedly annoyed he’d missed the chance to release it himself.

Get Right’s music video further boosted its hit potential, showing a night out in a sweaty club with Jennifer playing several characters; including a detached VIP hostess, DJ, dancer and bartender. The clip - directed by Francis Lawrence (who also shot her Waiting For Tonight and Play visuals) - is based on 90s comedy-drama film Short Cuts. But one thing that was all Jennifer was the scenes where she dances with a cane – moves she still pulls out today, as recently as this month's Super Bowl performance.

Get Right landed straight in at Number 1 on the Official UK Singles Chart 15 years ago this week, selling 52,000 copies in its opening week. It’s total chart sales to date stand at 422,000, including 17.3 million streams since 2014. It’s J-Lo’s third biggest single in the UK, behind On The Floor and If You Had My Love, and was her second chart-topper after Love Don’t Cost A Thing in 2001.

Elsewhere on the Official Singles Chart that week, a reissue of Elvis Presley’s Surrender was new at Number 2, LL Cool J landed his eighth UK Top 10 with Timbaland-produced Hush at 3, and a year after their split, Atomic Kitten scored their final Top 10 with Cradle – a  track from their debut album remixed and released in aid of charity World Vision.

Listen to the Top 40 from this week in 2005 on Spotify below. Listen on Deezer here.