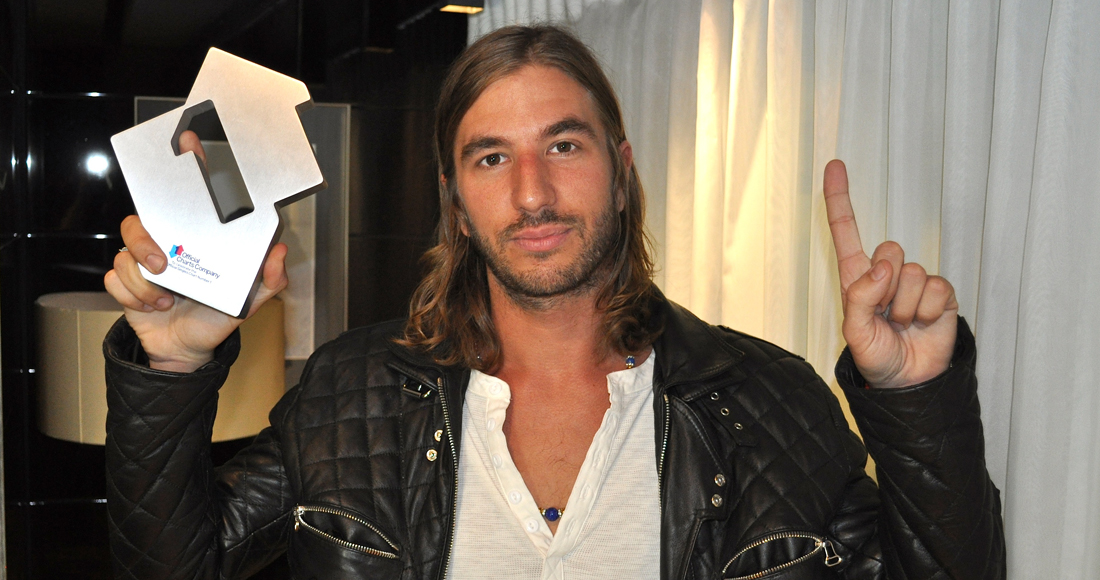 He’s the popstar you didn’t know you knew, he’s already had a massive Number 1 and he may well be in line for a few more. Meet the face behind that voice – John Martin.

When a new popstar launches, it’s an exciting time as a music lover. There’s all that new music to get your head around, of course, and then getting to know the artist – finding out more about them, waiting for new interviews, scouring their Wikipedia page for info. But what about brand new popstars who’ve been hiding in plain sight?

Swedish singer John Martin may be about to release his very first single Anywhere For You on March 30, but he’s no rookie – you’ve been dancing to the sound of his voice for years, thanks to his work with Swedish House Mafia and Tinie Tempah. You probably just didn’t know you knew him. OfficialCharts.com met up with John Martin to put a face to that name, and that unforgettable voice.

So he may be striking out on his own for the first time, but John Martin has a chart story going back almost three years. His first taste of chart success was as uncredited vocalist on Swedish House Mafia’s Top 10 hit Save The World in 2011, which he also co-wrote. Over a year later came the big one: a huge Number 1 single, again with Swedish House Mafia, Don’t You Worry Child. But this time, John’s name was on it.

“When Save The World came out, no-one knew who I was,” explains John. “But then when we decided to Don’t You Worry Child with them, more people knew who John Martin was… it was, like, ‘Yeah, we can do the song with you, but we need to be a feature’.

“Don’t You Worry Child was written by me and Michel Zitron, my friend that I write with, so we wrote that song and we gave it to Swedish House Mafia and they produced it. Save The World, that was another story. We got a track from them and we wrote melodies and lyrics for it.”

Not that John was complaining – there’s a certain protection to be enjoyed by just being a featured artist. “For me, it was a fantastic start,” says John. “That gave me time to still be in the shadows and prepare myself for what’s going to happen now, to write songs and build up a fanbase all over the world.”

Deciding to go it alone

After providing vocals on Sebastian Ingrosso and Tommy Trash’s Number 2 smash Reload in 2013, John’s most recent team effort was a feature on Tinie Tempah’s Top 10, Children Of The Sun. Says John: “It’s not a song I would do on my own, but it will show my voice for an audience who might not have heard it before.” But even though it wasn’t his track alone, John still feels the pressure: “Yes, I still want it to do well. I have more pressure now because I am putting out my own music.”

And now he’s finally got his own material coming out, how does that feel? “It feels very good. And it’s time; I couldn’t wait any longer. Now’s a good time to do it.”

John’s first foray into solo chart success is Anywhere For You, with its blustery video shot in Iceland. John confesses it was so windy, even a tall guy like him “could hardly stand up” as the gusts battered the shoot.

And why did it have to be Anywhere For You? Sentimental soul John reveals the song has a special place in his heart. “Two years ago, me and Michel (Zitron, who he writes songs with) went to LA for the first time. We rented a house and were there just to write songs and we had a great time there,” explains John.

Sounds pretty idyllic, right? John continues: “After a couple of months we got a little homesick and started to miss our families and friends back home and even though other people were, like, looking at us and thinking “Yeah you guys, you’re living the dream!” it became clear to us what’s really important and that’s relationships and loved ones back home – and that inspired us to write that song.”

John hints that Anywhere For You isn’t necessarily representative of what we can expect from his debut solo album, which is on its way later in the year.

“There are different styles,” he says. “But what every song has in common on the album is the melancholy, the sadness… mixed with the euphoric thing and storytelling.”

Ah, yes, that melancholic voice. Why does mixing a downbeat voice with an uplifting track work so well, especially for him? “That’s a tough question!” smiles John. But surely there’s some science behind this winning formula? It can’t just be luck, right?

“For us writing songs like that is easy,” shrugs John. “And with my voice it fits because it has this range… so the verses can be low and then the chorus I can go up, so that has become the trademark.” And if he had to describe his music in three words? John thinks very hard about this. “Soulful.” OK, there’s one. He does some more thinking. “Melodic. And melancholic.”

Thanks to teaming up with some of the biggest names in music, John is accustomed to performing in front of thousands of people. Not bad for someone who’s been kind of anonymously responsible for some huge hits.

“We did three shows in Sweden in front of 100,000 people over three days,” says John, looking excited at the memory. “My family was there and my friends and lot of people that I know in Sweden, so I was really nervous. But it was amazing; the energy was so fantastic.”

When flying solo, John was lined up to do a show in Brazil when it turned out the venue was… well, what you might call going back to basics. “It was like going back to the ‘60s! I did a soundcheck at a place in Rio and when I came back to do the show, the stage was gone and I asked the club, the promoter, “Where’s the stage?” and he was like ‘Oh, sorry, too many people here tonight’ but that show turned out to be one of the best shows I have ever done.”

Every artist has to have that popstar moment – the time when they realise “Actually, yes, it looks like I am a real popstar”. Whether it’s getting on a private jet, somebody asking for your autograph or even hearing your single being played in the pub in EastEnders, it’s a turning point for any performer.

For John, it involved a white-knuckle motorcycle ride across the capital. “I performed with Tinie Tempah here at the O2 and then right after that we were going to do Top Of The Pops on the other side of London,” explains John.

“We didn’t have much time and couldn’t risk getting a cab, so we jumped up on the motorcycle. It was December so it was really cold, and the driver was making excuses for driving so slow because there were a lot of (speed) cameras, but he was driving superfast!” They did, of course make it over to the Pops in time, and John confesses: “it was a nice way to see London!”

And with every popstar moment comes its evil twin – the time every artist looks back on with a cringe, wishing they’d fallen into a sinkhole. No such dramas for our John, though. He scratches his head and runs his fingers through those lustrous locks of his but nothing comes to mind. “There are some situations…” he begins, but then: “No embarrassing moments, I can’t really think of any.”

And we have to say, we can’t imagine there’ll be that many cringeworthy moments to come in his career – John Martin hasn’t put a foot wrong so far.