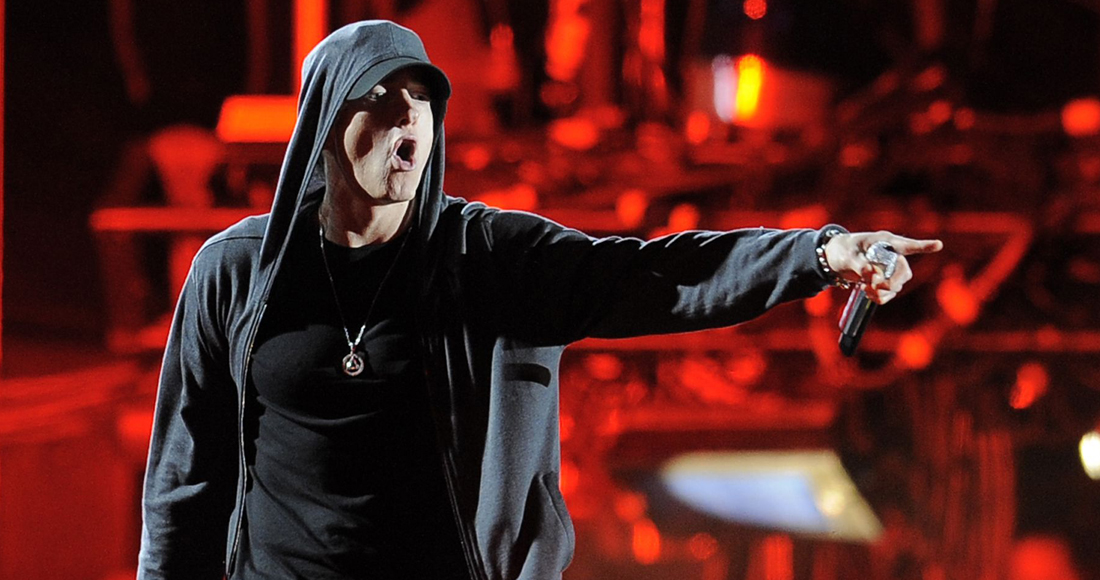 Since landing his breakthrough hit in the late '90s, Eminem has become one of the rap's biggest international sensations.

Since making his debut on the worldwide stage with My Name Is, Eminem has landed 42 Top 40 singles on the Official Chart, 32 of which have gone Top 10, including an almighty nine Number 1s. View Eminem's complete Official UK Chart history so far.

Check out the official ranking of his 40 biggest songs at the bottom of the page, based, on sales and streams compiled by the Official Charts Company data. First up, here are the numbers behind some of his most notable hits...

Eminem's first UK Number 1 arrived in the summer of 2000. The lead single from his third album The Marshall Mathers LP was co-produced by his mentor Dr. Dre and caused plenty of controversy at the time for poking fun at pop stars. The track opened with 86,000 sales to land at Number 1 (just ahead of Samantha Mumba's Gotta Tell You) and has notched up 1.24 million combined sales to date, including 66.2 million streams.

Eminem's disturbing yet gripping tale of an obsessed fan became his second chart-topping single in December 2000. The song gave Eminem's his biggest opening week for a single in the UK to date, racking up 199,000 sales in its first seven days on sale to land at Number 1. Its total combined sales now stand at 1.47 million, including 55.8 million streams.

Stan is also largely responsible for thrusting featured artist Dido into the limelight. Stan's chorus takes the opening verse from her song Thank You, which went on to become a Top 5 hit six months later.

The Monster/Love The Way You Lie

When Eminem and Rihanna first teamed up in 2010 on Love The Way You Lie, the pair seemed like a natural fit for a mega hit. Their lighter-waving mid-tempo ballad struck a chord with the world, but a Number 1 evaded them in the UK, logging four non-consecutive weeks at Number 2.

While Love The Way You Lie is Eminem's biggest selling single on the Official Chart with 1.28 million downloads to date, the song ranks as Slim Shady's second biggest hit overall.

The pair teamed up again on 2013's The Monster, this time nabbing the Number 1 spot for a single week. The song ranks at Eminem's fifth biggest single with 1.31m chart sales.

Accompanying Eminem's first foray into major motion pictures, 8 Mile, was a killer soundtrack by the man himself. It's lead single, Lose Yourself was hit across the globe and debuted at Number 1 on the Official Singles Chart in December 2002 with week 1 sales of 71,000.

As well as being the star's most successful song with 2.12 million combined sales (including 106 million streams), Lose Yourself was also the first rap track to ever win an Oscar for Best Original Song.

Further down the Top 40 chart, Eminem's most recent Number 1 hit, River, ranks seventh on 1.14 million, while a handful of the rapper's lower charting tracks make a surprise appearance, performing better over time than some of his Top 10 hits. 'Till I Collapse from his 2002 album The Eminem Show places at 12 thanks to a boost in sales in 2009, when it was used in an advert for the then-upcoming game Call of Duty: Modern Warfare 2.

Elsewhere, his Drake/Kanye/Lil Wayne collaboration Forever is 18th on the list despite its Number 42 peak on the Official Chart, while the Number 90-peaking Shake That ft. Nate Dogg is 23rd, placing higher that Top 10 hits such Cleanin' Out My Closet, Beyonce collaboration Walk On Water and Crack A Bottle ft. Dr Dre and 50 ent.

This chart is based on UK sales and streams combined.