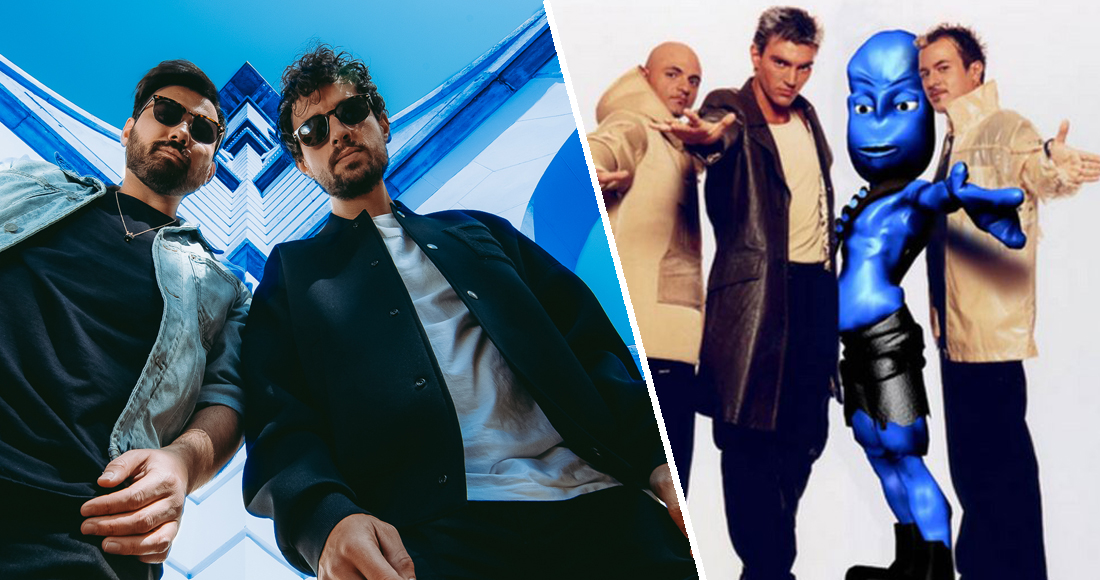 20 years ago this month the story of a little guy that lives in a blue world became a surprise hit: Blue (Da Ba Dee) by relatively unknown group Eiffel 65 landed at Number 1 on the Official Singles Chart and went on to sell over one million copies.

Blue (Da Ba Dee) was somewhere between a novelty hit and a serious dance tune. It was written in two hours, it was Europop and its music video featured strange-looking blue men. Eiffel 65 - a trio of Italian producers - told the story behind Blue in great depth in this Vice documentary earlier this year. The track has notched up 1.38 million chart sales in the UK, over a million of which are pure sales/downloads.

Two decades on, the song has been reworked by production duo SONDR. Their version is called So Blue and it's out this Friday (Oct. 11). SONDR's name may not be hugely familiar to you yet but pair - Yk Koi and Lorenzo Cosi - have racked up over 100 million streams globally with their work, including recent collaborations with Felix Jaehn, Lenny Kravitz and this very popular remix of Ed Sheeran's Castle On The Hill.

But why did SONDR decide to take on this dance classic in the first place? "For anyone who grew up in the 90s, Blue (Da Ba Dee) probably brings back some great memories," they told us. "It was one of our first introductions to dance music! 20 years on we thought it would be a fun challenge to re-work the song with a modern twist, so we reached out to Gabry Ponte from Eiffel 65."

SONDR's take on the song is more than a straightforward 2019 remix. "We knew from the start we wanted to re-write a version that borrowed just the hook," they explained. "It was quite a process, we worked on around 50 versions including various re-writes and vocalists. We were bouncing ideas over to Gabry but nothing seemed to stick.

"The idea went cold for a while until one Sunday a melody came to my head whilst watching A Place in the Sun. I grabbed my laptop and recorded the idea into the onboard microphone. It was super rough and had the TV audio in the background. I sent it to our group chat and everyone went crazy. From there, everything came together quite quickly.

"We are honoured that Eiffel 65 allowed us to release our version and hope that existing fans will enjoy the nostalgia while new fans will discover one of the most infectious melodies of all time!"