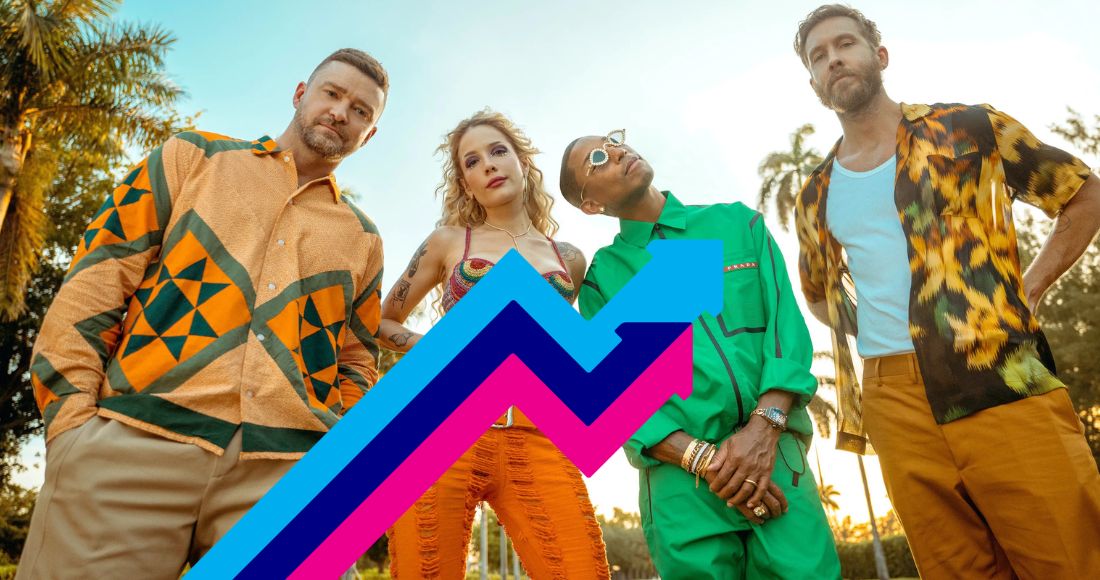 Blam! Calvin Harris, Justin Timberlake, Halsey and Pharrell Williams have bounced straight to the top of the Official Trending Chart with Stay With Me.

The superstar meet-up is proving to be the biggest breakthrough hit from Calvin's new record Funk Wav Bounces - Vol. 2, which also contains collaborations with Dua Lipa, Charlie Puth and Normani.

The barmy, funk-inspired song is currently on a massive upward trajectory on the Official Singles Chart, it's so far peaked at Number 13 in the UK, but is looking to break into the Top 10 - currently at Number 9. It would be Calvin’s 28th, Justin’s 21st, Pharrell’s 9th and Halsey’s 4th UK Top 10 hit respectively.

There is only one new entry on the chart this week - Nicki Minaj's bouncy comeback single Super Freaky Girl, which samples the Rick James classic Super Freak. It's currently on track to become Nicki's 40th UK Top 40 single.

Elsewhere, we have a number of fast-rising tracks on the chart. These include Australian DJ Luude's follow-up to Down Under, Big City Life with Mattafix, Diplo & Miguel's team-up Don't Forget My Love and this week's biggest climber, Cian Ducrot's tender breakout single All For You - which could very well break into the Top 40 for the first time this week.
And finally, Swedish pop princess Zara Larsson is making something of a well-deserves chart resurgence with Words her team up with DJ and producer Alesso. The track is currently up 12 places at the midweek mark, could it make it all the way to the UK Top 40 in the coming weeks?