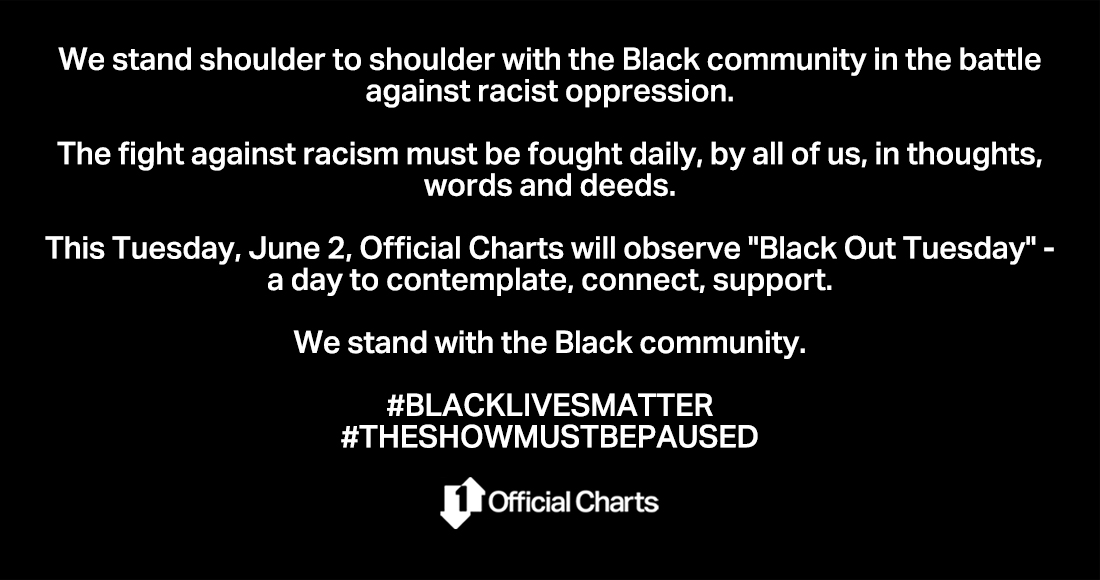 The music industry across the world is observing Black Out Tuesday (June 2) in response to the collective fury over the death of George Floyd.

Mr Floyd, 46, died in Minneapolis last week after white police officer Derek Chauvin was filmed kneeling on his neck for at least eight minutes, having handcuffed him and pinned him to the ground while arresting him for allegedly using a fake $20 note in a shop.

The music industry will stop its everyday operations on June 2 and instead use the time as "a day to disconnect from work and reconnect with our community," intended as “an urgent step of action to provoke accountability and change.”

"Tuesday, June 2nd is meant to intentionally disrupt the work week,” they wrote. “The music industry is a multi-billion dollar industry. An industry that has profited predominantly from Black art. Our mission is to hold the industry at large, including major corporations + their partners who benefit from the efforts, struggles and successes of Black people accountable. … This is not just a 24-hour initiative. We are and will be in this fight for the long haul. A plan of action will be announced.” Read their message in full here.

Official Charts are among the dozens of music companies who are observing the Black Out, along with Universal Music, Warner Music, Sony Music, Kobalt, BPI, Aim, PPL and others.

Below is a list of resources anyone of any ethnicity or gender can use to inform themselves further with this urgent issue, and ways to support social and racial justice.

This Guide to Allyship is extremely helpful.

This infographic guide on white privilege is clear and concise.

This Guide to Bystander Intervention offers great advice on how you can help create a safe public space.

Advice by the brilliant team at shesaid.so, for white people wondering how to engage in anti-racism:

Below is a list of recommended material you can view or read to help gain a wider understanding of the underlying racial issues that still exist today.

Jane Elliot is an Anti Racist Activist and Educator who devised this experiment following the assassination of Dr Martin Luther King.

Portraits of public and private lives against the shifting social climate of 20th century Britain.

Will Britain Ever Have A Black Prime Minister?

Akala discuss two issues that run to the heart of modern Britain: race and class, picking apart many of the modern myths around gangs, street violence and black youth.

BBC documentary in which David Olusoga opens secret government files to show how the Windrush scandal and the ‘hostile environment’ for black British immigrants has been 70 years in the making.

Battle for Brixton - The Brixton Riots

Documentary on the build up to the Brixton riots and the tactics used by the Metropolitan police to deal with the disorder.

The Murder of Stephen Lawrence

Documentary on the murder of South East London resident Stephen Lawrence in 1993. The case becameone of the highest profile racial killings in UK history; its fallout included profound cultural changes to attitudes on racism and the police.

The Lawful Killing of Mark Duggan

Drama documentary about the police shooting of Mark Duggan in Tottenham in August 2011, combining interviews with dramatised reconstructions of the day leading up to the shooting.

When They See Us

Four-part Netflix series about the 1989 Central Park jogger case, exploring the lives and families of the five male suspects who were falsely accused then prosecuted on charges related to the rape and assault of a woman in New York.

Netflix film. A deep examination of the US prison system, looking at how the country's history of racial inequality drives the high rate of incarceration in America.

Why I Am No Longer Talking to White People About Race by Reni Lodge - read her original blog post here.

Brit(ish): On Race, Identity and Belonging Book by Afua Hirsch - watch her summary of the book here.

Black and British: A Forgotten History Book by David Olusoga

Natives: Race and Class in the Ruins of Empire by Akala