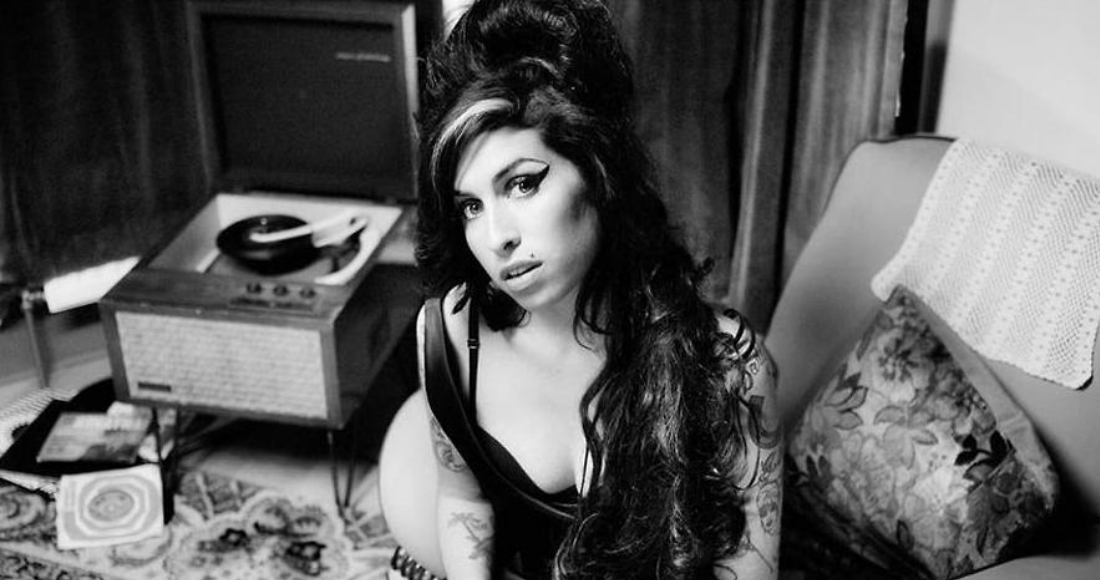 Four years after her untimely death in 2011, Amy Winehouse is back in the news following the release of a documentary on her life and career.

In recognition of Amy’s huge contribution to the British music scene and culture, we look back at the album that made her a star – 2006’s Back To Black.

Amy had already tasted modest success with her debut album Frank – a jazzy, bluesy affair covering topics like unreliable boyfriends, dangerous flirtations, relationship woes and girls Amy wasn’t so keen on. The critically acclaimed collection peaked at Number 13 in the third week its release in 2004 before beginning its descent, and earned the star two BRIT Award nominations that year, with Stronger Than Me taking an Ivor Novello Award.

While there was buzz around Amy, it’s fair to say that few outside those closest to her expected her to blow up in such a big way. But blow up she would, with second album Back To Black.

While Amy’s first album had teased darker themes, Back To Black was wall-to-wall heartbreak. Before writing and recording the album, Amy had begun a relationship with Blake Fielder-Civil, which would end when he went back to his girlfriend. As we all now know, that separation was temporary, but as Amy put Back To Black together, she didn’t know that – and it shows throughout her songwriting.

Let’s look at the singles and a detailed breakdown of Back To Black’s success.

The Back To Black campaign began with the release of Rehab, the autobiographical ‘60s pastiche – in the very best sense of the word, of course – that somehow made light of a very real problem. The story goes that Amy’s previous management company had tried to persuade the star to check into a rehabilitation problem to sort out her issues with alcohol, but she flatly refused.

The classic line “If my daddy thinks I’m fine” refers to Amy’s dad Mitch telling his daughter he didn’t think she needed rehab but should give it a try. In an interview, Amy said she took his advice, kind of. The star walked in, said a few hellos, told them she drank because her relationship was over and left.

When Amy told producer Mark Ronson this story, he told her this really should be a song, and so it was. Rehab was Amy’s first ever UK Top 40 hit, and a Top 10 too! It peaked at Number 7 and spent 19 consecutive weeks in the Top 40.

Rehab is Back To Black’s bestselling track – over 383,000 copies sold.

The album followed straight after Rehab, selling over 43,000 copies in its first week on sale and reaching Number 3.

ChartFact: Remixes of Rehab included one featuring a rap from none other than Jay Z.

Next up was Amy’s tell-all about her then-failed relationship with Blake, the brilliantly anguished yet resigned admission by Amy that she just couldn’t help herself. “I cry for you on the kitchen floor” was based on Amy’s normal behaviour whenever she broke up with a boyfriend, according to her brother.

Thanks in part to the success of the album, which was now nudging 360,000 copies after three months on sale, plus the fact it was New Year when music sales are traditionally on the quiet side, You Know I’m No Good fared less well than Rehab, peaking at Number 18.

It didn’t go quietly, though – it was used in lots of ad campaigns and even found its way into Mad Men. You Know I’m No Good also became the theme tune for the high-profile drama series Secret Diary Of A Call Girl, starring former TARDIS-botherer and Number 1 popstar Billie Piper.

Arctic Monkeys performed an inspired cover of the track in their Radio 1 Live Lounge session, and Amy herself would perform the track as a medley with Rehab during her set that was broadcast by satellite at the Grammy Awards where, of course, Amy would take home five trophies.

During You Know I’m No Good’s chart run, Back To Black reached Number 1 on the Official Albums Chart for the first time. It would go on to spend six weeks there, on and off.

ChartFact: The radio version of the single featured a rap from Ghostface Killah.

The time had come for the title track to have its day in the sun and Amy’s trademark image was now fully present – this was the first official video to feature that famous beehive.. Another tale of lost love, Back To Black’s sombre video – which saw Amy attending the funeral of her very own heart – clearly matched the singer’s mood.

Sales of the album had passed 900,000, so you could forgive the record-buying public for not paying the song as much attentions maybe they should have. Averaging around 20,000 sales a week, the album’s success meant Back To Black would peak at Number 25.

This right would eventually be wronged upon Amy’s sad death in 2011 – a wave of public affection carried the track into the Top 10 for the first time, peaking at Number 8.

ChartFact: Back To Black’s B-side was an acoustic cover of the Zutons’ Valerie, which Amy had performed in Jo Whiley’s Live Lounge. Amy was about to have a huge hit with it – her chart peak – featuring on Mark Ronson’s version of the song later in 2007. It would reach Number 2, kept off the top spot by Sugababes’ huge selling About You Now.

By now, Amy had become a tabloid focus but Back To Black’s hits still kept on coming. Tears Dry On Their Own featured a sample of Marvin Gaye/Tammi Terrell classic Ain’t No Mountain High Enough, which was never a hit for the duo but was covered by Diana Ross in 1970, reaching Number 8.

ChartFact: Sam Smith has called Amy Winehouse a huge influence, recently performing Tears Dry On Their Own as a mashup at one of his first live shows since recovering from throat surgery.

Perhaps the saddest of all Amy’s songs, this heartrending ballad would actually miss the Top 40 on its first release. The final single she would release during her lifetime, Amy performed Love Is A Losing Game at the Mercury Prize in 2007 BRIT Awards in 2008 (above). It would go on to win an Ivor Novello Award – Amy’s third.

December 2007 was boom-time for Back To Black. In the run-up to Christmas, a deluxe release of the album helped it sell 330,000 copies in just two weeks, passing the two-million mark.

ChartFact: In a bittersweet moment of chart justice, Love Is A Losing Game did eventually make the Top 40, peaking at Number 33 following the star’s passing in 2011.

Back To Black in numbers

In 2009, Back To Black would become one of the bestselling of all time, when it sailed past the three-million milestone that August.

Latest stats show Back To Black has now sold 3.58 million copies in the UK, with 3.3 million of those being physical sales.

2007’s Deluxe Edition– then counted as a separate release – gave Amy her third Number 1 album, meaning that she ties with Kate Bush for the most Number 1 albums by a British female solo artist.

Back To Black is the second biggest selling album of the 21st century, just behind Adele’s 21.

Some stats at a glance: