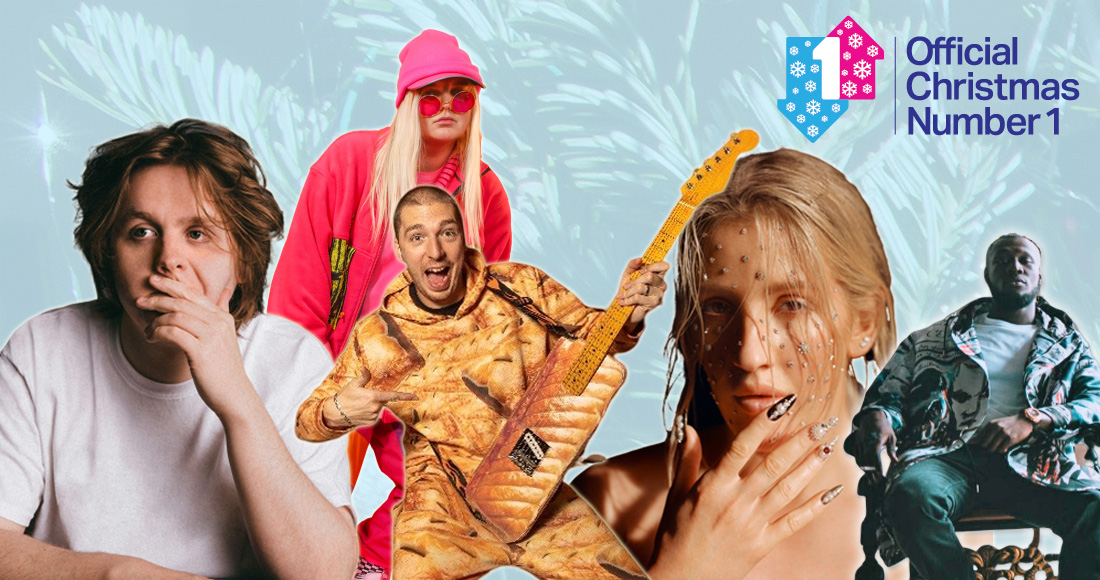 On your marks, get festive, GO! The race for this year’s Official Christmas Number 1 is coming. The winner of the biggest chart battle of the year will be announced on Friday, December 20.

The Christmas Number 1 is a British tradition that stretches back over 65 years and has been claimed by some of the world’s most iconic music stars. The Beatles, Spice Girls, Queen, Cliff Richard and Mr Blobby (you heard us!) have all landed Christmas chart-toppers in the past.

Among the 66 chart-toppers, 12 are genuine Christmas songs, eight are by TV talent show winners, three are by choirs and three are novelty singles. Look back at every Christmas Number 1 single here.

Last year saw dad blogger and YouTube star LadBaby claim the Christmas chart crown with his cover of We Built This City; an ode to sausage rolls that raised money for foodbank charity The Trussell Trust. It was the first novelty single to top the chart at Christmas since Bob The Builder’s Can We Fix It? in 2000.

"The whole of last Christmas passed me by because of all the chaos," LadBaby - real name Mark Hoyle - told OfficialCharts.com. "It only really sunk in what had happened around February. What sticks out for me was people saying we couldn't do it... in a funny way it rallied people to get behind the song.

"Everywhere I go now people shout out at me 'You're the sausage roll man!', probably more so than LadBaby. My following since then has grown dramatically as well, and it's given some much-needed attention to the Trussell Trust. It really is humbling to see what we achieved with them."

Of this year's festive race, Martin Talbot, Chief Executive of the Official Charts Company, added: “December is the best time of year for so many reasons – and the Christmas Number 1 race is one of the highlights. Now, with one month to go until we announce the new festive chart topper, it is great to be able to unveil the key contenders. Of course, the big question is, Who is going to lead the way? As experience has told us, only a fool would make a prediction this far out. The British public will decide. And this is one vote this December which will hopefully brighten the mood of the nation.”

But who’s currently in line to bag 2019’s Official Christmas Number 1? Here’s a look at the contenders…

Last year's Christmas chart-topper is back with a fresh bid for the festive chart crown. Following last year's rework of Starship’s We Built This City as an ode to sausage rolls (rather than rock and roll), this year the YouTube dad blogger and his family return with a playful twist on Joan Jett's I Love Rock 'n' Roll. Their version is titled I Love Sausage Rolls (of course). The song is available to preoder and presave now - all proceeds go to food bank charity The Trussell Trust.

2019 has been Capaldi’s year – what better way to round it off than with a Christmas Number 1? Before You Go heads up a deluxe edition re-release of his Number 1 debut album Divinely Uninspired To A Hellish Extent. He’s described it as "by far" his most personal tune yet, and yes, it’s a swooping, emotionally-wrought, lighter-waving, fist-clenching power ballad – exactly the sort of song you might expect to see at the top of the charts at Christmas.
See all of Lewis' biggest songs on his Official Chart History.

None of this trifecta of Christmas classics have reached Number 1 before, and each are being heavily backed by various campaigners to reach the top spot this year. Wham’s Last Christmas is the title track of a new festive film, and George Michael’s team have said there is renewed focus on getting the song to Number 1 in tribute to the late music star.

This year marks 25 years of Mariah’s All I Want For Christmas Is You, and the Queen of Christmas is making sure everyone knows about it. As well as a curious-but-brilliant team up with Walkers crisps, she’s reissued her Christmas album and is releasing the single on cassette CD, 7” and 12” formats. A new version of the music video featuring previously unseen footage has also been released to help boost its streaming numbers. AIWFCIY reached Number 4 on last year’s Official Christmas Chart – will this be the year it finally goes all the way?

Don’t count The Pogues out either; bookies are giving good odds on Fairytale of New York – originally at Number 2 hit in 1987 – claiming this year’s Number 1. The track has re-entered the Official Singles Chart every Christmas since downloads were introduced in 2005.

The Australian singer-songwriter's global breakthrough hit Dance Monkey has been Number 1 for ten weeks - can she hold on long enough to claim the UK's Official Christmas Number 1? The track has been a massive runaway success and isn't showing signs of slowing down yet...

To celebrate London’s Waltham Forest as the city’s first ever London Borough of Culture, 100 local school children have recorded East 17’s Stay Another Day, 25 years after it the original claimed the Christmas top spot. The choir are accompanied by East London Brass and East 17’s founding member and writer of the original song Tony Mortimer on keys. Proceeds from the song – released on December 3 - go to CALM (Campaign Against Living Miserably).

Another charity single raisin money for CALM, DIY indie ska band Death of Guitar Pop & Star have teamed up with Inbetweeners star James Buckley on Feeling Like A Right James Blunt At Christmas. The song's music video - inspired by festive hits of the past, including Fairtytale of New York and Stay Another Day - is quickly racking up views. Could this underdog go all the way? Read more about the song on their Facebook campaign page.

Six-year-old brain tumour survivor Lyra Cole is currently one of the bookies' favourites to land the coveted Christmas top spot. With the help of her Auntie Jessie Hawkins, Lyra has released her version of When a Child is Born - a former Christmas Number 1 by Jonny Mathis in 1976 - in a bid to raise funds for Brain Tumour Research.

Ellie has teamed up with Amazon to record a cover of the Joni Mitchell classic - and the response has been huge. The track is quickly soaring up the Official Singles Chart (Number 2 in the latest update) and could go all the way for the Christmas top spot.

Grime star D Double E soundtracks this year's Ikea Christmas advert with his his song Fresh N Clean (Silence The Critics) - a withering and hilarious takedown of a tired-looking home in desperate need of a spruce-up. The full song was released on November 14 and is quickly catching on with the increasing rotation of Christmas TV ads.

He’s best known as The People’s Champion for his prowess in the ring, but it seems Tyson Fury has also got a decent set of pipes on him. The boxer has recorded Bad Sharon – a boozy a thoroughly British singalong (“Go to bed you sleepy dossers!”) – with Robbie Williams for Robbie’s first ever Christmas album. If it catches on, it could be huge.

There’s been a flurry of support for James Blunt’s latest single Monsters to claim this year’s Christmas Number 1. The singer-songwriter and ex-soldier has teamed up with The Sun to donate all royalties from the song to Armed Forces charity Help For Heroes. The emotional ballad, James explained, is dedicated to his dad, who is awaiting a kidney transplant, but took on a broader meaning after he performed it at the Festival of Remembrance in London’s Royal Albert Hall in front of the Queen and bereaved families from the Afghan and Iraq wars.

Songs recorded for the John Lewis Christmas advert stand a strong chance of reaching the Top 40 (or Number 1 in some cases), but could Bastille’s go all the way on this year’s Christmas chart? The band’s frontman Dan Smith has recorded a twinkly cover of REO Speedwagon’s Can’t Fight This Feeling – originally a Number 16 hit in 1985.

Frankie Morland could be this year’s surprise Christmas Number 1. The 8-year-old schoolboy from Fleet has written and recorded a song called World In Danger about his fears on climate change and the future of the planet, inspired by a response from Sir David Attenborough to his letter about the subject. Any profits from the song, released on December 13, are going to environmental charities. More details here.

Little Mix have dabbled in Christmas music before, releasing a festive version of their 2015 single Love Me Like You. This year, they’re going all-out with a sultry-yet-festive R&B-pop ballad. Can One I’ve Been Missing end a 17-year drought of girlband Christmas Number 1s? Girls Aloud were the last to do it with Sound of the Underground in 2002.

The rapper and singer is releasing his highly anticipated second album Heavy Is The Head on December 13, and one of its tracks, Own It ft. Ed Sheeran and Burna Boy, has its sights set on the top spot this Christmas. The record's lead single Vossi Bop debuted at Number 1 on the Official Singles Chart back in May, and follow up Crown peaked at Number 4, making his odds for the Christmas top spot very promising indeed.