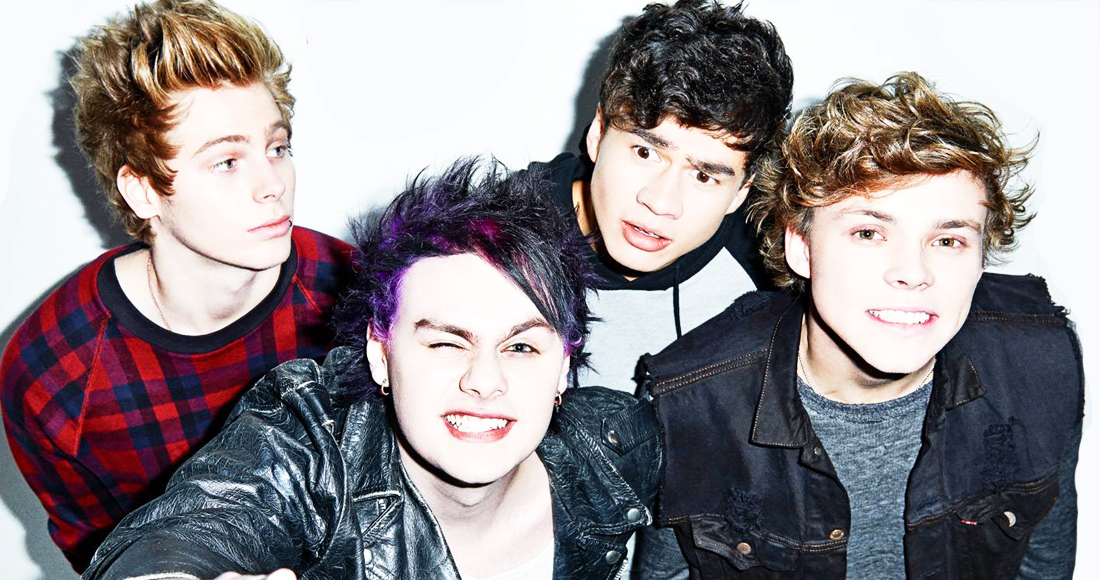 Earlier this week, OfficialCharts.com announced that 5 Seconds Of Summer are set to score their first UK Official Singles Chart Number 1 this weekend with their debut single, She Looks So Perfect. The pop/rock quartet are relatively unknown here in the UK so we thought this would be the perfect opportunity to catch you up on all things 5SOS!

So, who ARE 5 Seconds Of Summer?

Yes, they really are that young! How did they meet?

Luke, Michael and Calum all attended Norwest Christian College in Sydney together. They started uploading videos to YouTube, including covers of chart favourites like Bruno Mars, Adele, Ed Sheeran and Justin Bieber. Michael came up with the name 5 Seconds Of Summer and, at first, the other boys were less than impressed! “I wanted a name that people could add their own name to like ‘5 Seconds of Calum’ but that’s the only thing I was thinking about… the other boys hated it”.

In 2011, the trio were joined by drummer Ashton, completing the current 5 Seconds Of Summer line-up.

How did they hit the big time?

The band’s following significantly increased in 2012 when One Direction star Louis Tomlinson tweeted a YouTube link to the band’s track Gotta Get Out. The quartet then went on to support 1D on the UK, USA, Australia and New Zealand legs of their Take Me Home Tour in 2013. Ashton commented on their rapid rise to stardom, "Our first show with 1D was pretty special… we had to take it from garage playing to arena playing- it was crazy!"

In November 2013, 5SOS signed to Capitol Records and have since been working (A LOT- they have written and recorded over 100 songs!) on their debut album. Of the band’s decision to sign with Capitol, Ashton explained, "There weren’t a lot of people that understood the band’s vision but Capitol did".

They have a MASSIVE social media following

Between the four of them, they have a whopping 16 and a half MILLION followers on Facebook, Twitter and Instagram and over 50 million YouTube views. Ashton excitedly comments "We have fans all over the place now… it’s going to be great to try and visit EVERYWHERE too".

And as if that wasn’t enough, the boys have also had mentions from One Direction’s Louis and Niall and Little Mix’s Perrie on Twitter!

Where can you see them live?

The One Direction boys must have liked them, as 5 Seconds Of Summer will be back on tour with the supergroup supporting both the UK and European legs of their 2014 Where We Are Tour, starting in May.

5 Things You Didn’t Know About 5 Seconds Of Summer

1. 5SOS have their own record label 'Hi Or Hey Records'
2. According to Michael, Luke’s secret passion is moisturising! (Ladies beware- if you ever get the chance to meet him, his skin may be softer than yours!)
3. The band’s top choices for duet partners are Chris Brown, Blink 182 and the Fresh Prince himself, Will Smith
4. Luke has chat show queen Oprah Winfrey’s number saved in his phone!
5. Whilst on tour with 1D, Calum ended up with his trousers duct-taped together after they split in front of 15,000 people!

To find out if 5 Seconds Of Summer are Number 1 this week, tune into BBC Radio 1’s Official Chart Show with Jameela Jamil this Sunday (March 30) from 4pm and visit www.officialcharts.com to view the full Official Singles Chart Top 100 at 7pm.