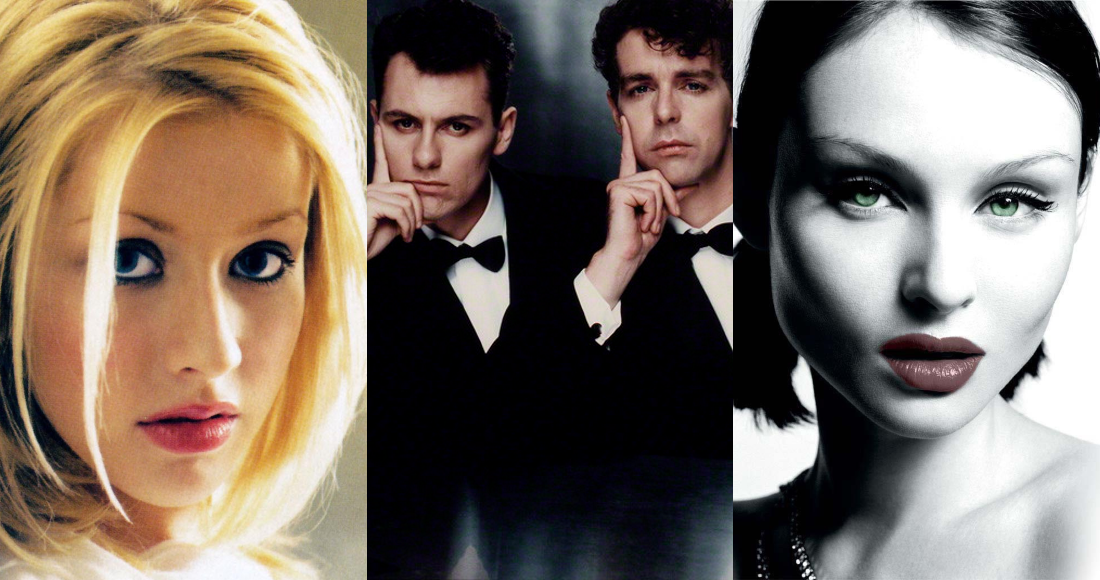 We all like to be the ones to do something first, but it’s inevitable that sometimes someone will get there before you. But if nobody knows, what’s the harm, right?

We look at the stories behind some of the most surprising cover versions in pop – some you might not have even realised were covers. And others, well, their history might not be as straightforward as you think. You pub quiz cramming starts here.

After Sophie’s breakthrough spot on Spiller’s dance anthem Groovejet in 2000, her first album of solo material was one of the most hotly anticipated in the pop biz. And for her solo debut she didn’t disappoint, with the quirky, dance-pop explosion that was Take Me Home. But Sophie wasn’t the first to take this one home.

Take Me Home was originally recorded by none other than Cher in 1979, in a rare foray into disco for the singing legend. Cher’s version didn’t chart in the UK, but Sophie’s certainly did, with rejigged lyrics walking it all the way to the front door of Number 2 (enough with the Take Me Home puns, please – Songwords Ed).

Following on from their debut hit All Rise, the Blue boys – Duncan, Lee, Antony and Simon – turned their attention from the courtroom to the dancefloor with this decidedly saucy number. We won’t linger too long on the lyrics, which are interesting enough, and instead head over to the original version of the song.

Yep, before the foxy foursome got their hands all over it, Too Close was a huge hit stateside for a trio – Next, to be exact. The group took the tune to Number 1 in the US in 1998, but it only reached Number 24 in the UK. Three years later, Blue took it all the way to the top. We believe Next have since forged a career for themselves in the business of selling clothing and home furnishings.

Celine Dion – It’s All Coming Back To Me Now

Almost everybody knows the old story that this ballad of love and loss was written by long-time Meat Loaf collaborator Jim Steinman, and that the large-lunged rocker had wanted to sing the song himself. Celine got there before him, however, going to Number 3 with it in 1996 and selling over 435,000 copies. But what not many people know is that Celine Dion wasn’t the first star to record and release it.

An early version of It’s All Coming Back To Me Now appeared on the debut album by all-female group Pandora’s Box and was released as a single in the UK. That version reached Number 51 in 1989, seven years before Celine made it a worldwide smash.

As banging a song as it may have been, Jump was not a Girls Aloud original. The band’s version was a Number 2 hit for them in 2003, but nearly 20 years earlier, Jump was in the Top 10 for somebody else – and it sounded pretty different.

Legendary girlgroup Pointer Sisters (yes, they weren’t just bandmates but siblings too) had their third Top 10 hit with what they preferred to call Jump (For My Love) in 1984, reaching Number 6.

Klaxons – It’s Not Over Yet

Back in the brief period of the Noughties when it was either nu-rave or no rave, glamorous Ray-Ban enthusiasts the Klaxons enjoyed their fourth Top 40 with It’s Not Over Yet, a happy-sad slice of dance-rock that peaked at Number 13 in 2007. But it wasn’t their very own track.

The song started out in an even ravier guise back in 1993 as Not Over Yet, thanks to DJ Paul Oakenfold, the brains and the decks behind dance act Grace. It took another two years for the track to find fame on a dance compilation of ‘90s superclub Renaissance and then burst into the charts, peaking at Number 6.

It wasn’t, erm, over yet for Not Over Yet either. Even before Klaxons gave it their signature sound, it was rereleased in 1999, this time by Perfecto FT Grace, and hit Number 16.

Seen by many as one of Tina's signature hits – even if most people do mistakenly think it’s called Simply The Best – this track was a huge hit for Tina twice! The Best’s origins, however, go much further back, and to different set of legendary pipes altogether.

The song was originally recorded by Bonnie Tyler, who had a Number 1 in 1983 with Total Eclipse Of The Heart. While Bonnie’s version isn’t drastically different from the version that would be a worldwide hit for Tina, it missed the Top 40 in the UK on release in 1988.

Bonnie’s loss would be Tina’s gain, and she made it her own. She first released The Best in 1989, hitting Number 5. In 2010, a campaign by Glasgow football club Rangers to get the song to Number 1 took it to Number 9 on the UK Official Singles Chart, although it did hit the top of the Scottish Singles Chart.

Billie – She Wants You

Long before Billie Piper was zooming off in the TARDIS in Doctor Who, she was, of course, a popstar! Her first two singles were both Number 1s, and for her third she released bubbly disco-esque track She Wants You, but she wasn’t first to give it the once over with her sonic screwdriver.

The track, with a much more R&B sound, was originally recorded two years before Billie took it to Number 3 in late 1998. Slovak star Dara Rolins was the one on original vocal duties, with She Wants You featuring on her album What You See Is What You Get.

Christina Aguilera – I Turn To You

Landing Christina her third Top 40 UK hit in 2000, I Turn To You was not merely handed to her by a genie in a bottle, oh no. The song started life with American R&B boyband All 4 One way back in 1996 and featured on the soundtrack to the movie Space Jam.

It didn’t make much of an impact until Christina recorded it, however, which must have been a bit gutting for the All 4 One lads. That’s showbiz, however – their breakthrough UK hit I Swear, which hit Number 2 in 1994, was itself a cover of a country song that had been a hit in the States earlier that year. Swings and roundabouts, guys…

Now we all know what Pet Shop Boys’ Christmas Number 1 from 1987 was a cover version – it was voted the nation’s favourite cover in a BBC poll in 2014. Elvis Presley is widely credited with originating the song, but while he was the first artist to have a hit with it in the UK, he wasn’t the first to record it.

Gwen McCrae is officially the first person to have recorded and released it in the US in 1972, with Brenda Lee following close behind. It was Elvis’s version that actually broke into the UK charts, however, reaching Number 9 in 1973. Country star Willie Nelson just missed the Top 40 with his version in 1982, before the Pet Shop Boys became the first act to take it to Number 1.

> Pop Gem: Pet Shop Boys – What Have I Done To Deserve This?

It was a fifth Top 10 hit in a row for Vamps when Oh Cecilia (Breaking My Heart) reached Number 9 in late 2014, but the song itself was certainly no stranger to the Top 10 at all. 18 years earlier, former Madness frontman Suggs teamed up with duo Louchie Lou and Michie One to take the track – with its original, shortened name of Cecilia – all the way to Number 4.

He was first to have a hit with it in the UK, but the track has an even longer history. It was originally recorded by folky duo Simon & Garfunkel – ask your gran, or perhaps somebody who owns a lot of vintage clothes – in 1970 and was a hit in the US. It’s been covered by loads of artists since, but only Suggs and the Vamps gave it chart power!

> Sing it back! A few more hits songs you never knew were covers!

Got any more songs that are actually secret or surprising cover versions? Tell us on Facebook or Twitter – we’ve another roundup coming later in the year!