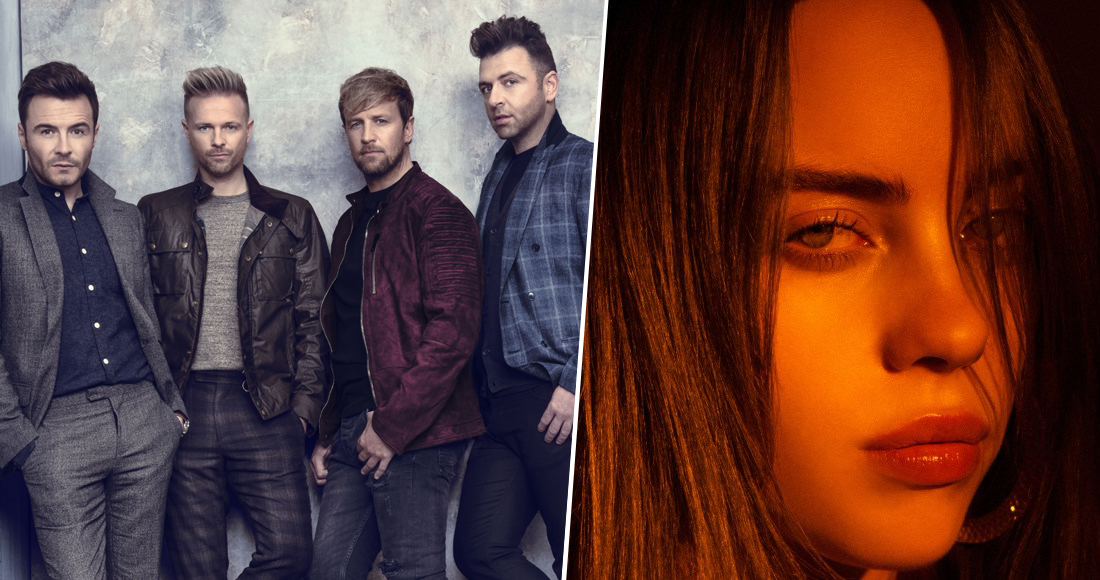 The midweek numbers are in, and this week could be a big one for both Westlife and Billie Eilish.

In today's Official Irish Chart Update, Westlife lead the albums Top 50 and are already in-line for 2019's fastest-selling album with Spectrum after a weekend of sales. Should Spectrum continue its momentum, the album will be Westlife's 11th Number 1.

Spectrum features the Number 2 single Hello My Love and Top 50 hits Better Man, Dynamite and My Blood. All four songs are co-written by Ed Sheeran.

Celine Dion is on track for a Top 5 debut with her first English language album in six years, Courage, currently at Number 4. 2013's Loved Me Back To Life peaked at Number 3.

On the singles rundown, Billie Eilish could claim her first Number 1 single with Everything I Wanted. The song currently has a narrow lead over last week's chart-topper Don't Start Now by Dua Lipa. Billie has so far peaked at Number 2 twice with hits Bury A Friend and Bad Guy.

Taylor Swift's Lover is set for a Top 20 return at Number 19 following the release of a new version featuring Shawn Mendes, and finally, Irish rappers Versatile are on course for a third Top 50 hit with Escape Wagon featuring Coolio at Number 20.

This week's final chart placings will be revealed at 3pm on Friday along with the full Top 50 Official Irish Singles and Albums Charts on OfficialCharts.com/Ireland. Listen to the chart every Friday on RTÉ FM with Bláthnaid Treacy at 8pm.