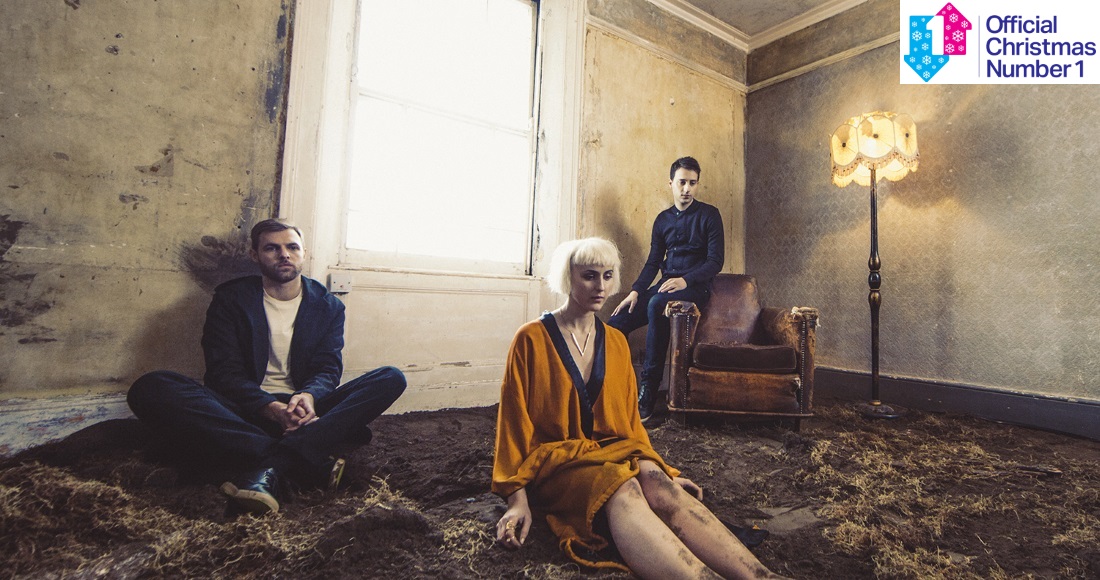 Recording a classic cover for John Lewis' Christmas TV ad campaign is now famous for putting acts on the map; and the same can be said for the talented stars behind this year's commercials - Vaults.

The trio - made up of vocalist Blythe Pepino, producer Barney Freeman, and songwriter and musician Ben Vella - have been signed to Virgin EMI since 2014 and have been making waves with electronica numbers Midnight River and Vultures.

Now it's the band's time to step into the mainstream; and they're doing so at music's busiest time of the year - the Christmas Number 1 race. We sat down with the group to discuss their #XmasNo1 chances, their new album Caught in Still Life and trying again if at first you should not succeed...

Recording the song for the John Lewis Christmas ad is quite a big deal. How did it all happen?

Blythe: "We actually pitched for it last year, and we didn't get it. But, they told us that they really liked our version of it [last year's campaign single Half the World Away]. They were looking for something quite specific this year and they put it out to a small amount of people. They sent us the song and then we recorded my vocal on it. We sent it off and they seemed to like it!"

So there's an Oasis cover from you guys somewhere out there...

You recorded that track at Abbey Road, which must have been a massive tick off the bucket list...

Ben: "It was as amazing as you would expect really. Walking in there and there was an orchestra and choir waiting of around 150 people. We got hang out in The Beatles' Room 2 which was empty that day so we got to mess around in there and play on the original Beatles pianos. It is everything you want one of those places to be; it's a living museum in the best possible way."

Barney: "It's got the old canteen and everything!"

One Day I’ll Fly Away is quite different to the style of music you normally produce. Did you have reservations about how you were going to be perceived musically?

Blythe: "It passed through our minds but it was very important to do a good job. Basically, we had been employed to do a job and we wanted to do it well. We didn't just want to probe our own sound into it. We thought just to not worry about it. If people like my voice then hopefully they'll listen to our other stuff."

Barney: "In fact, when it first went up online, we had a look on the iTunes chart and we had six of our other tunes in the Top 100 so that proved that people were getting into our music off the back of that so it was great."

Ben: "Also if we hadn't have liked the song, the whole experience would have been a completely different thing. Blythe really loved the song, working with Chris Hill the string arranger was really positive, so even though the style is very different to what we normally do, it was so enjoyable. To attempt to put our electronic sound on it would have been silly really. It's this huge, lush, amazing film score and if we started putting on beats and booms, it would have been daft."

Did you take any cues from the previous John Lewis singles from the likes of Ellie Goulding, Aurora and Lily Allen?

Blythe: "I didn't really look into it too much until we had got it. Now we've gone back and listened to all of the other ones and I really like the Lily Allen track actually. It sounds quite humble and it's very touching the way she's done it. It's not overblown."

Ben: "There wasn't a lot to compare this year's to either. They've broken from the tradition of being more acoustic where as this has been a completely different thing."

You realise that this immediately puts you down as a contender for the Christmas Number 1. How do you rate your chances?

Barney: "Ben's put his house on it at William Hill!"

Ben: "Yeah the kids are looking a little nervous. It is a bit unusual this year what with the nature of the track - it's a real Hollywood film score. It's not as traditional so it'll be interesting to see how it does. Then saying that, it is very Christmassy so who knows."

Blythe: "We've gone both ways with it. There's been days where I've just thought 'nooo, there's not a chance in a million' but then there are other times and I hear someone's feedback and they know other people who have listened to it. We can't think about it too much though, really."

If you manage to get a strong Christmas chart position, what would that mean to you as a band?

Ben: "Well it is obviously really good timing as our album is out now! [laughs] It is amazing for that."

Blythe: "It would be incredible but it has never been something that we would ever have imagined could happen. We're just enjoying the ride really."

You will perhaps forever be synonymous with Christmas now! Do you have a favourite Christmas tune that always gets you in the mood?

Blythe: "I don't have a favourite Christmas song. I'm not just going to bust one out now! I like some parts of it but I'm not a massive Christmassy person."

Barney: "But don't you like buying people presents, Blythe? [laughs]"

Blythe: "No! These two have already trapped me about admitting this before! Me and my boyfriend agreed to not buy each other presents. My thing is that I don't like being pressurised into buying presents because then you buy things that don't matter as much. Only when I see something I really like would I get it."

Ben: "Sounds like a stitch-up to me come Christmas Day... 'I thought you said we weren't doing presents Blythe?!' [laughs]"