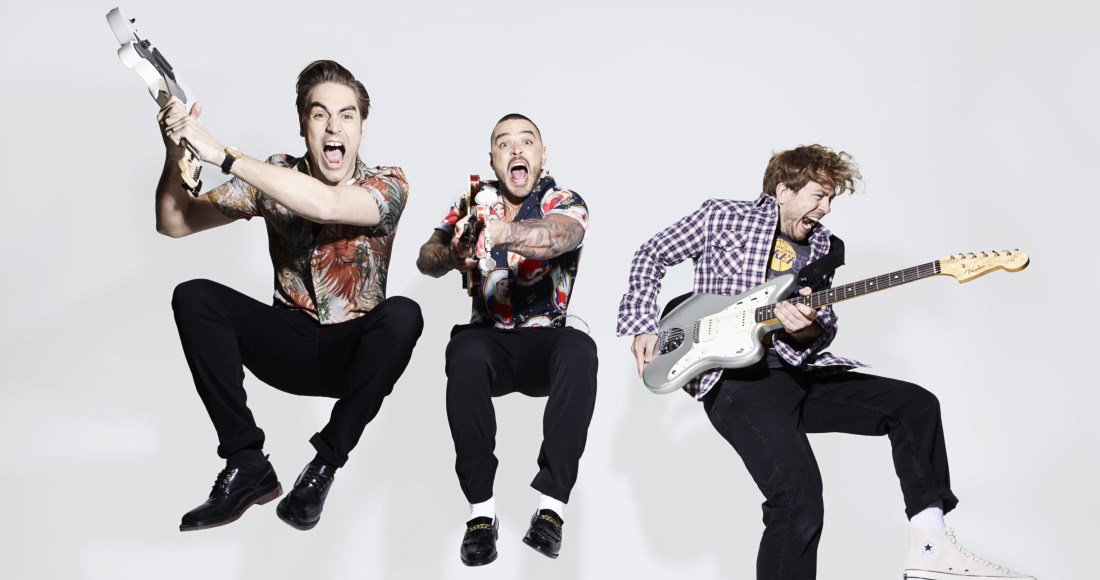 Busted's fourth album Half Way There isn't just a nod to their song Year 3000 (where they outsold Michael Jackson with their seventh album), it also symbolises their vision for the band.

"We're Quentin Tarantino-ing it," the reinvigorated group tell us when we meet the band at their record label. "We've always said we should only make seven albums. That should be Busted's thing. There's 10 songs on the album and when you get to Track 5, you are effectively half way through the Busted journey, which eventually should have an ending. Seven albums and out!"

The album marks a return to the pop-rock sound of their first two albums, after 2016's synthpop-heavy Night Driver divided fans. The 17 years since their debut has been long enough for their signature sound to come back into style, revived by songs like Panic! At The Disco's High Hopes and 5 Seconds of Summer's Youngblood. That said, they're not quite so sure of the genre's return...

Busted, you're back with your pop-punk sound!

Matt: "We've made a very terrible creative decision really in a way because we've created an album that doesn't fit into today's landscape. But I feel we've made a fanbase record for a reason. I love this music and there's not much of it around at the moment. I don't think it sounds like it's from 2004, but it has elements of that time in my life."

James: "It sounds like a band from 2004 being true to themselves and not trying to be like anyone else. Everyone's just trying to fit in. When we came out the first time, we naturally just tied in well with people like Avril Lavigne and seemed to belong to a scene that was happening. We rode the crest of that wave and lucked out. It was right place, right time.

"Then we came out again, we hadn't made music together in forever and we just wanted to make songs that we could agree on. That's what Night Driver was. We got really excited and thought it might fit into the current situation, but really, what's so special about Half Way There is that we've completely gone back to the essential version of what we are as a band. This album really should be our self-titled album."

For anyone that discovered you with Night Driver, this is going to be a lot different...

Matt: “It’s peculiar, isn’t it? I look back on Busted with a very warm feeling – I love Busted but there are certain parts about Busted that annoy me and I wish we could have changed them or done them differently. I feel like I’ve rectified all of those problems with this album. We’ve made the Busted album we’ve always wanted to make."

Charlie: “Night Driver is more of a concept record and if you look back over the albums, that’ll be the one where we did something different and it was f**king awesome. When I listen to that album, it still f**king blows my mind. "But if I spoke to someone who had never heard of Busted, I would give them Half Way There to listen to."

It sounds like you're enjoying yourselves this time around...

James: "We're at the pinnacle of Busted right now! The enjoyment you get when you make the music... that has to come out when you do it live and make your videos. That's the heart behind the music. It feels great that we've been able to make an album like this."

Charlie: "And what's great about the video is that, nobody is making f**king funny videos anymore. Everyone's just trying to look cool. I love watching Foo Fighters and Blink videos - it's just fun, you know?"

One of your songs that has stood the test of time is What Happened To Your Band. You recorded it with Son of Dork, James, and then with McBusted and now it’s on this album. What made you want to revisit it?

James: "It was always supposed to be a Busted song but it was written right after we broke up. When we were writing [Half Way There] we started talking about it and then Matt and Charlie were like, 'maybe it would be interesting for us to record that song?' It got used on all those other albums because it was a really good song but really the real home for that song was on a Busted album."

Matt: "I don’t think it fulfilled its potential. James played me that song what feels like a lifetime ago, and I remember hearing it and thinking 'that is the best Busted song that never happened', and it always bugged me. Then we did it with McBusted and it was kind of forgotten about. Now we’re like 'fuck, this is a Busted song'. It always meant something to me."

All My Friends is an album highlight. The lyric, "We’re not old, but we’re not as young as we used to be, halfway to obscurity" - is that scenario something that’s played on your minds?

Charlie: "It used to bug me that our fanbase was so young, but it worked out really well! I think that we are in a different place than an 18-year-old band coming out now. We were around in a different industry, it literally is a different music industry. What I think this album represents is just if you keep your fans happy, then you don’t have to worry about what’s going on around you in the music industry.

"We’re lucky enough to have built a brilliant fanbase. They’re the ones who are gonna buy the record in 20 years, so that’s what it’s about. I think we cared so much about how to promote records in this current market and now it’s like whatever man - just make a record the fans like and go and play it to them.

Matt: "Luckily enough the music that pleases our fans pleases us. We get to make what we like but I’m pretty sure that they're gonna like it because… that’s Busted!"

Busted's new album Half Way There is out now.