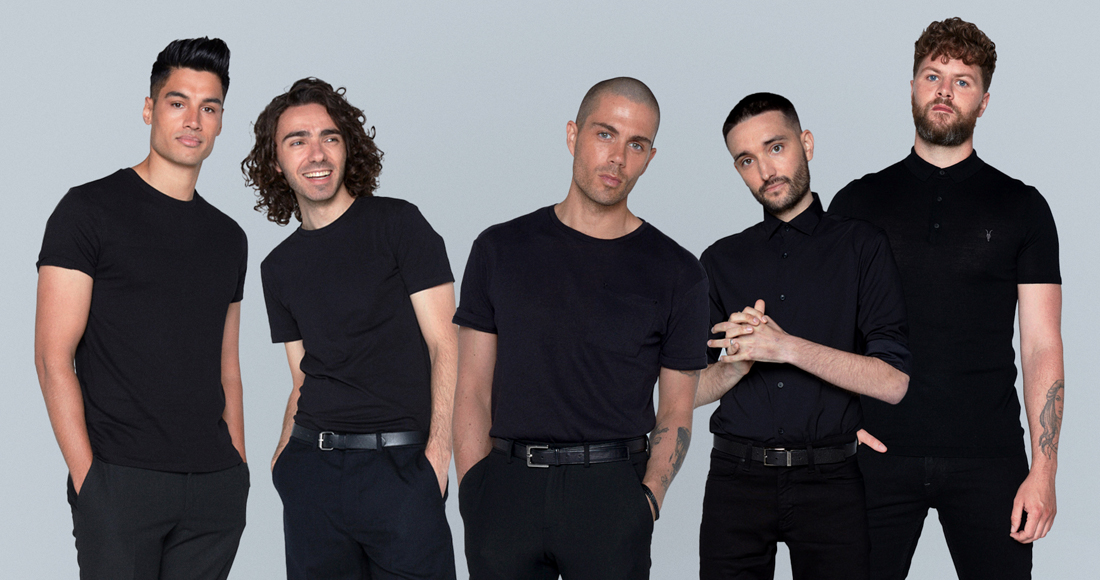 Just over 11 years ago, The Wanted made the rarely-seen leap from regional school gigs and club performances to the top of the Official Singles Chart.

As well as fulfiling the boyband archetype (five good-looking lads who could carry a tune) their initial success was down to thier debut single All Time Low being a genuine triumph.

The fact that Radio 1 gave the song its first play only as it hit Number 1 gave them an added underdog, rebelious and laddish quality that helped them stand out from the pack, helping them score 12 Top 40 singles and three Top 10 albums is less than four years.

Now back together with greatest hits album Most Wanted (out November 12) - featuring two brand-new tracks - and a UK arena tour lined up for 2022, we caught up with members Max George, Jay McGuiness and Siva Kaneswaran to talk all the hits, misses, and plans for the future.

It’s been two months since you announced your reunion. How is life in the band comparing to ten years ago?

Jay: For me this has been so enjoyable. The world is very different and definitely feels like less of a grind for us. We have days off worked in to the schedule. We come in happy, supportive, having a giggle and I dunno, it just feels so much easier, Maybe our egos are less involved, we just want to have a good time.

Max: We are more in control this time – obviously we can’t be in control of everything or that would be complete chaos. We’re listened to a bit more this time, and part of the enjoyment this time is that our expectations aren’t the same as what they used to be. Last time we’d be getting Number 1s, and when we didn’t get a Number 1 we’d be devasted. It doesn’t matter this time – we just want to put out good music, tour and have a good time. Whatever the numbers are that follow that are just numbers.

Your new single Rule The World manages to sound like a mix of classic The Wanted with a 2021 twist. How did it come together?

Max: I wrote it with Lauv four or five years ago – I didn’t know he was Lauv, I knew him as Ari Leff, but he’s changed his name since. I put it in front of the boys and they liked it. When I did songs myself, I naturally did songs that would kind of fit The Wanted. Rule The World was a mix of Chasing The Sun and We Own The Night. When the boys sang it, it was very, very rough. It immediately sounded like The Wanted, but the production…  we wanted to get it sounding very current. We tweaked it until it sounded like The Wanted in 2021.

Jay: Our other new track, Colours, was written by Nathan with David Sneddon. If you had to compare it to a previous Wanted song it reminds me a bit of Lightning – a big midtempo ballad.

Music is obviously in a very different place to where The Wanted left it in 2013. What are your expectations this time around?

Jay: I definitely notice the difference because even though I’ve been doing things related to music, I’ve not been in the music industry in any form, so the change is huge. The whole release date thing had already started changing towards the end for us. Part of me loves it now – the songs go out and there’s time for it to breathe. Songs that become popular sort of do it organically. I’ve learnt, through Spotify playlists, that our new single is basically a big workout hit. I love that!

You scored two Number 1s at two pivotal moments during your initial run, your debut single All Time Low and Glad You Came. You recently released fan editions of your Official Number 1 Award for both songs (available to pre-order now). Do you remember how you felt when each topped the chart?

Max: I remember the All Time Low one – that was probably the biggest moment it terms of excitement and shock I’ve ever had in my life. I cried like a baby. I couldn’t believe we’d come from doing these school gigs and being lads just having a go, to top of the chart. We had to go to Radio 1 and we were all pissed by the time we got there. It meant that Radio 1 had to play us, which they hadn’t done at that point.

Jay: For Glad You Came, it definitely had that feeling of wow, we’ve done it again. There were so many things going on at the same time. We had just started at a new label, Island Records, and people we had only just met were popping champagne with us and telling us well done. We then travelled for the next three years to places we’d never been before, which was pretty wild. 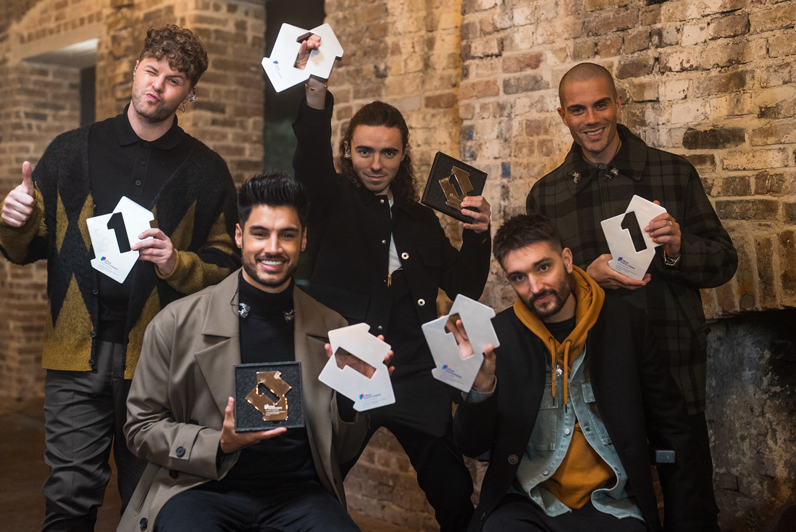 The Wanted with their Official Fan Number 1 Awards.

Own a piece of The Wanted's pop history

Last month, we teamed up with The Wanted to launch the first-ever limited-edition Fan Number 1 Awards from the Official Charts Company.

Fans of The Wanted can now own a special personalised piece of the band's pop history - a limited edition replica Official Chart Number 1 Award for their chart-topping hits, including the one where it all started - All Time Low - and the biggest smash of their career Glad You Came.

Pick your favourite track, customise it with your name (or the name of the devoted Wanted fan in your life!) each award comes in a presentation box and carries a unique serial number. Only 500 copies available of each. The perfect festive gift!

You first performance together was shown on Tom’s Inside My Head documentary, where you all seemed very emotional to be back on stage. Did it all click back into place easily?

Max: We all had a sense of the occasion. It wasn’t just being back together, there was an overwhelming sense of why we’re here. The mix of the two made it an immense feeling of happiness, excitement, pride, sadness – it was very overwhelming actually.

Jay: We’d never done The Royal Albert Hall. We’re looking at all of this through new eyes now - I was listening to one of our songs with completely new ears as well. We’ve seen fans over the years tell us how much the songs affect them, and at the time we were acting like 21-year-old arseholes and were like ‘yeah great!’ But then suddenly listening to the lyrics and all the things that have been going on – seeing it through Tom’s eyes, the whole thing feels like a complete gift.

Be honest - who was the rustiest during rehearsals?

Jay: All of us to be honest! We also realized that some of us have been singing the wrong words for ten years.

Max: For me, some of our album tracks were lyrically quite powerful I guess, but in general we always tried to keep it catchy, repetitive and a lot of fun.

You’re releasing your greatest hits album in one of the busiest Q4 periods of recent years. Feeling nervous?

Max: I’m not going to lie – one thing that has changed since we last released music is that the biggest artists in the world will go ‘oh, I’ve got a single out tomorrow!’ and I’m like, ‘We’ve been preparing this for seven f**king years! [laughs]’. Our expectations have changed now – it’s a privilege to be involved in the mix. 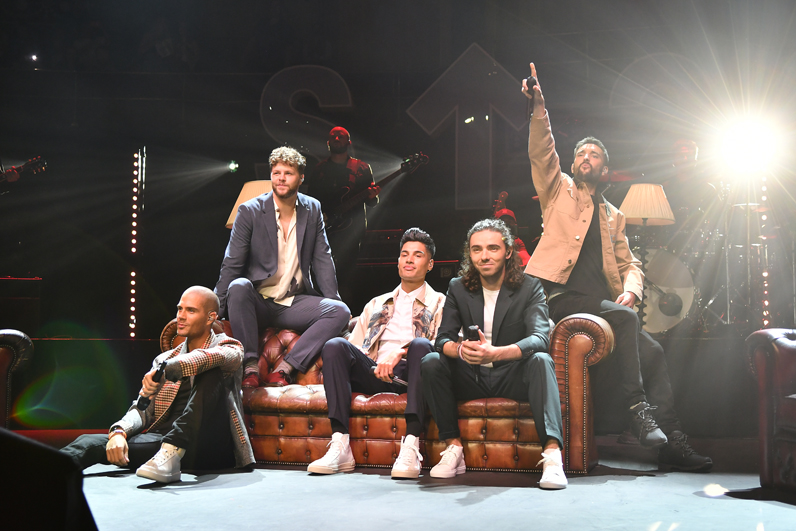 The Wanted’s initial run was pretty much wall-to-wall hits, but which was your favourite?

Max: All Time Low for me. I have so many memories from that song. Before we were known as The Wanted we were just five lads trying to be a band. We were performing that song at schools and clubs and absolutely loving it. It made us the band we are.

Siva: I’d have to say Glad You Came. It just brought us across the world – our first international smash. It took us to places we never thought we’d see, and people seemed to genuinely love the song.

Jay: Mine at this point would probably be Gold Forever. It reflects how I feel about how privileged we are to have this job and look back over the past 11 years. I’m really proud to be a part of that song.

Max: We had great songwriters as well. We’ve all admitted this – as people, our songs were probably bigger than we were as a band. And that’s fine with us – our whole thing was to be a band with music that stood the test of time. We had no clue that Spotify would be the judge of that today!

And what single are you less keen on in hindsight?

Jay: It’s an enjoyable pop song – the label always remind us that the numbers on it are high – but it always felt like we were doing an impression of One Direction, or that new-gen boyband. It was a tactical move by the label to appeal to a younger fanbase.

Max: It’s a song we didn’t really like, but it did do well. If you look at The Wanted’s songs, it didn’t fit in.

Which Wanted song should have been a hit?

Max: For me, Warzone. It was a track we put out after the album had come out, but I feel like if we’d put it out before the album it would have done really well.

Jay: I remember hearing the demo of that. I’d rarely – if ever – talk about an unreleased song as say it’s a hit, but internally I felt so confident this would be a new Glad You Came.

Max: I remember filming the video for it ten years ago at the weekend because City beat Man United 6 - 1!