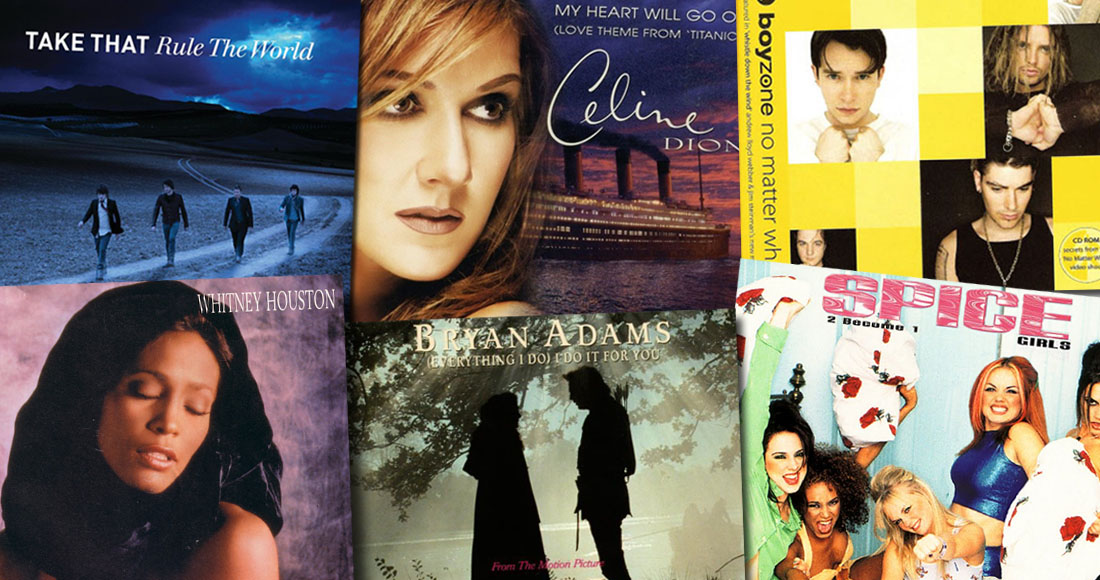 Ah, Valentine's Day – bunches of flowers, boxes of chocolates, a glass of champagne and a romantic dinner, but let's not forget the music to set the mood!

The Brits are a soppy lot, and many of our biggest selling singles of all time are love songs. To celebrate Valentine's Day we've put together a romantic playlist for you here, and we count down the UK's favourite love ballads – the Official Top 20 best sellers. ❤

Summer 1994 belonged to this song, by Scottish band Wet Wet Wet, which spent an astonishing 15 straight weeks at Number 1 – the second longest consecutive run at the top of all time, and equalled in 2016 by Drake's One Dance. Taken from the global movie phenomenon Four Weddings and a Funeral, starring Hugh Grant and Andie MacDowell, Love Is All Around was the Wets' third Number 1.

The track was a cover – it originally got to Number 5 in 1967 for the Troggs. The Wet Wet Wet version has sold 1.9 million copies! "Is it still raining? I hadn't noticed." Smooth, Andie. Smooth.

Unchained Melody may be over five decades old, but it still has enduring appeal, and is much-covered, reaching Number 1 four times for different artists. Coming off the back of their starring roles in ITV's military drama Soldier Soldier, Robson & Jerome's version was a double-A side with a cover of Vera Lynn's White Cliffs of Dover and stayed at Number 1 for a whopping seven weeks. Sentimental sorts couldn't get enough of it – it's sold 1.87 million copies.

MORE: See the chart runs of every version of Unchained Melody 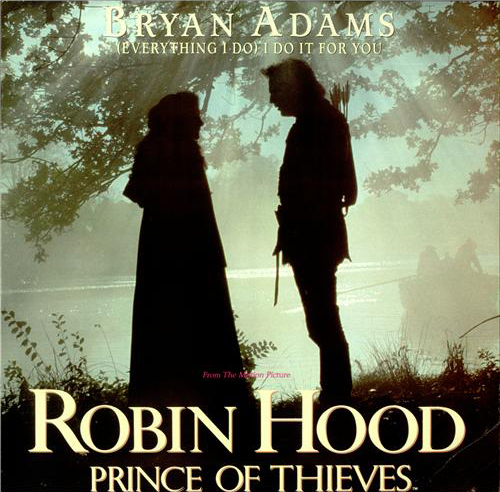 Bryan's classic ballad kept hold of the top spot for an incredible 16 weeks. Sixteen. If you weren't a big fan of the song, let's just say summer 1991 was a particularly tough time to be a chart fan. 1.86 million of you own this one.

The single sold over 1.1 million copies in its first week on sale and is still the fastest-selling debut single ever. The single spent three weeks at the summit and now has over 1.79 million sales. See where all of Will Young's UK songs and albums have charted.

It's well known the song was a cover of a Dolly Parton track that never charted in the UK. Two further versions have made the Top 40: a dance reinterpretation by Sarah Washington hit Number 12 in 1993, and Pop Idol finalist Rik Waller went Top 10 with his rendition in 2002. Whitney's still the one to beat, though: her version has sold 1.65 million copies.
See all of Whitney's biggest hit songs and albums here.

Céline Dion is the only star to snare two spots on our Top 20, cementing her place as the queen of love songs. Titanic-soundtracking My Heart Will Go On is her biggest, sailing into sixth place with 1.59 million sales. Not too far behind is Think Twice, Céline's first chart-topper, with 1.38 million sales at 8, one place behind Jennifer Rush's The Power of Love, which Céline herself would later cover. View Celine's full Official Charts history.

Gareth Gates's 2002 version of Unchained Melody, which actually deposed Will Young from Number 1, comes in ninth with 1.35 million sales, while the highest placed song not to reach Number 1 at all is John Legend's All Of Me, also the most recent track in our countdown. It passed a million sales in 2015 – it's now on 1.29 million.

Take That make another showing at 23 with Rule The World, from the film Stardust. Also bubbling under are Christina Perri's Jar of Hearts (24) and Adele's Make You Feel My Love comes in 25th. Play those to us and, yes, we will marry you.

The Official Top 20 biggest selling love ballads ever in the UK appear below. Click here to listen to a playlist of the songs on Spotify, and here if you're on Deezer.

Listen to the UK's biggest selling love ballads in our playlist below: