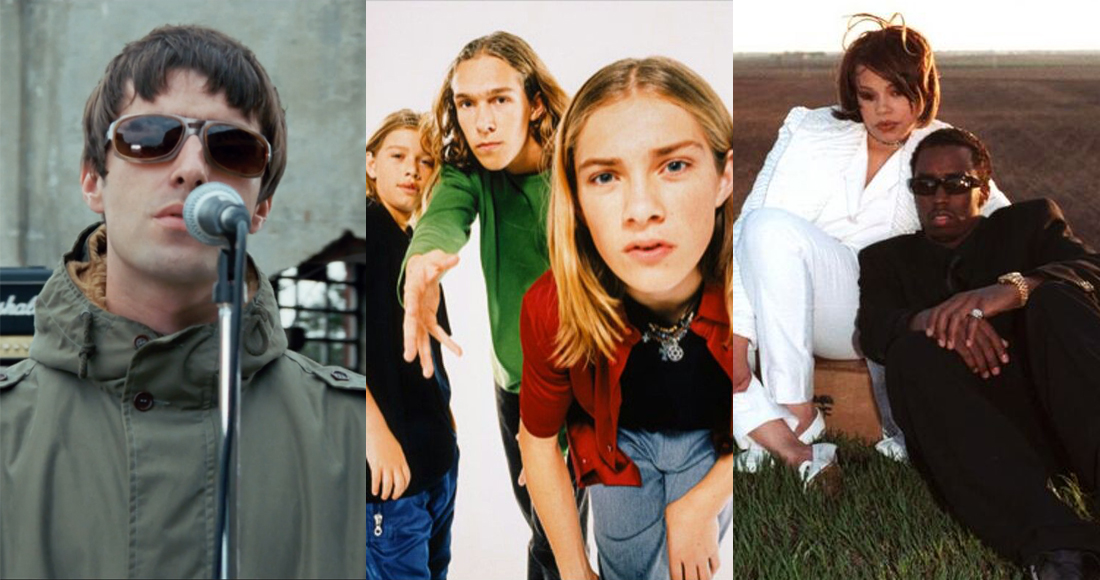 The summer of 1997. It was a wet one, but there were still a few pop triumphs to be had. The UK won the Eurovision Song Contest in May thanks to Katrina and the Waves’ Love Shine A Light, and Oasis set a new record for the UK’s fastest selling album ever with Be Here Now.

As for the singles chart, it was a very mixed bag. There had recently been an explosion of mega pop, but because those releases were generally saved for the final quarter of the year, the Top 40 across the summer months remained a melting pot of pop, rock, R&B, dance - and even a bit of opera.

Below we reveal which were the biggest songs of summer 1997, based on Official Charts Company data from June 1 – August 31. If you're interested to see what's changed 20 years on, check out the top 40 summer songs of 2017. First, let’s take a closer look at some notable entries.

First charting in the UK towards the end of summer in August, Bitch still manages to finish at Number 17 on the list. Ubiquitous at the time for its gutsy singalong chorus and similarities to Alanis Morissette, the track reached Number 6 on the Official Singles Chart, logging 4 weeks in the Top 10. 20 years on, it’s still go-to f-you anthem for many of you – Bitch has been streamed over 1 million times in the UK this year alone.

It's not exactly the first song most people would associate with summer, but Sarah Brightman and Andrea Bocelli’s operatic-pop collaboration captured the hearts the UK (and the rest of the Europe, for that matter) that summer.

Peaking at Number 2 for two weeks in May, the song racked up a total of 11 weeks in the Top 40 and finishes ninth place on the countdown. Fun fact: this was Germany’s best-selling single of all time (reportedly 2.75 million sales) until Elton John’s Candle In The Wind overtook it that September following the death of Princess Diana.

US singer Ultra Nate dominated the airwaves with Free in summer 1997, quickly earning its status as a club classic staple. It peaked at Number 4 and shifted almost half a million copies in its first three months, placing sixth in the biggest songs of that summer. 20 years later, and you'll hear it sampled in a big new single coming very soon...

Oasis – D’You Know What I Mean?

Anticipation for a new Oasis album was sky-high following the success of 1995’s (What’s The Story) Morning Glory?. The track - released in July - shifted a mighty 370,000 in its opening week (including 162,000 in its first day) to debut at Number 1 - though it didn’t sell quite enough that summer to finish top of this countdown, placing at Number 3.

Three unassuming brothers emerged in the summer of 1997 with one mighty song. The ridiculously catchy MMMBop reached Number 1 in 27 countries that year, including three weeks at the top of the Official UK Singles Chart. Still, there was one song which managed to be even bigger that summer…

Released in memory of rapper Notorious B.I.G, who had been murdered fourth months previously, I’ll Be Missing You took over the world in summer 1997. Featuring a sample of The Police’s 1983 single Every Breath You Take, the song shifted 109,000 in its opening week to debut at Number 1, and logged a total of 6 weeks at the summit, making it the UK’s best-selling song of summer 1997.

The track went on to become one of the UK’s biggest selling singles of all time, with total sales of 1.7 million to date.