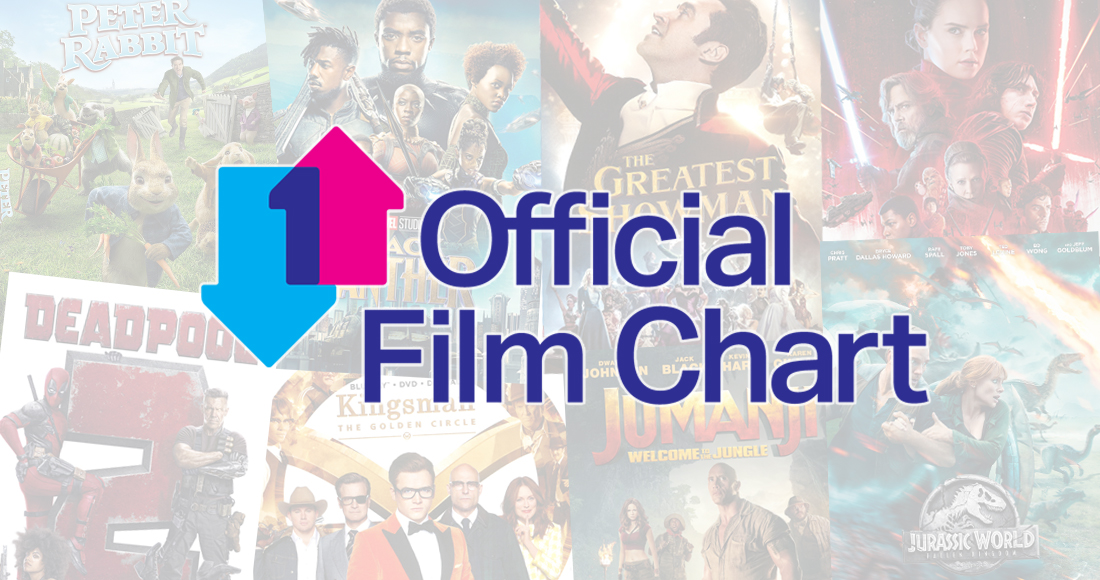 The chart will be published on OfficialCharts.com every Wednesday and will count movie downloads from services including Amazon's Prime Video, iTunes, Sky Store, Virgin Media Store, Rakuten TV, Talk Talk TV, as well as 4K UHD, Blu-ray and DVD disc sales from all high street and online retailers.

The chart is the result of a partnership between the Official Charts Company, the British Association for Screen Entertainment (BASE) and incorporating data from retailer members of the Entertainment Retailers Association (ERA).

Each week the Top 10 Official Film Chart will feature as an online show, which will published on OfficialCharts.com and available for media syndication. The show will count down the Top 10 biggest selling movies on disc and download for that week and also include bonus "coming soon" content for film lovers.

The first Official Film Chart Number 1 is Jurassic World: Fallen Kingdom which roars to the top of the charts on downloads alone. The first episode of the Official Film Chart online show also features an exclusive clip from the forthcoming home entertainment release of the smash hit Mamma Mia 2: Here We Go Again.

Watch the Top 10 countdown below:

Over the past five years, downloading of film content has been growing, driven by the range of services and improved technology. In 2018 to date, UK movie fans have already downloaded over 15 million films, more than were downloaded in the whole of 2017 – helping the overall market to almost 55 million video sales across all formats (download, 4K UHD, Blu-ray and DVD).

The growth in 2018 has been driven by a huge range of success stories, encompassing titles for audiences of every age and flavour. Number 1s across the year include hits as diverse as Paddington 2, The Greatest Showman, Victoria & Abdul and Thor: Ragnarok, with the advent of the new Official Film Chart set to celebrate a host of successes to come.

To mark the launch of the first weekly Official Film Chart, Official Charts is also unveiling the biggest selling films on disc and download for the year to date so far. Topping the list is The Greatest Showman – which has sold more than 2m copies in the UK, including 1.4m discs and over 600,000 downloads. Star Wars The Last Jedi is second place overall 1.1m sold copies on disc and 160,000 downloads (tenth biggest on downloads), while Avengers Infinity War is third with combined sales of just over 1m copies (second biggest on downloads).

The Official Film Chart - best-sellers of the year to date

Official Charts Company chief executive Martin Talbot said: "We are delighted and very proud to be launching the world’s first Official Film Chart including download figures and are hugely grateful to the services who are contributing to it.

"The Official Film Chart will be the definitive snapshot of the UK’s favourite movies on disc and download - for the first time, both film fans and the industry will be able to review the biggest selling titles every week across both physical and digital formats, which is a huge step for the industry."

BASE chief executive Liz Bales adds: “In an ever-changing but consistently dynamic home entertainment industry, it has been felt for some time that there should be a method of both celebrating and signposting audience engagement with owned content and the brand new Official Film Chart does just that. With significant growth in digital ownership, and ongoing engagement with the full suite of physical options – including 4K UHD, Blu-ray and DVD – it is clear that film in all its forms continues to be a must-own commodity.

"Over the last couple of years, BASE has worked closely with the our members across distribution and online retail in particular and, in tandem with the Official Charts Company, provided a crucial bridge to unlock the digital data necessary for this world first combined chart to land with authority. Having done so, and with the heritage and gravitas the Official Charts Company gives the countdown, we are hugely excited to be able to celebrate the inaugural chart, with Jurassic World: Fallen Kingdom a worthy first recipient of the coveted number one slot. With the release schedule ramping up as we move into the busy pre-Christmas sales period, we look forward to celebrating further successes in the coming weeks.”

ERA chief executive Kim Bayley said: "Thanks to digital services and retailers, film fans have a greater variety of ways to buy and own the movies they love than ever before. We are delighted to collaborate with OCC and BASE to supply the data which will power the world’s first weekly movie chart.”

The Official Film Chart will be based on downloads through Amazon, iTunes, Sky, Virgin Media Store, Rakuten TV and Talk Talk TV, and physical sales (DVDs and Blu-Rays) through high street retailers, grocers and online outlets. It will span the sales week from Sunday through to Saturday.