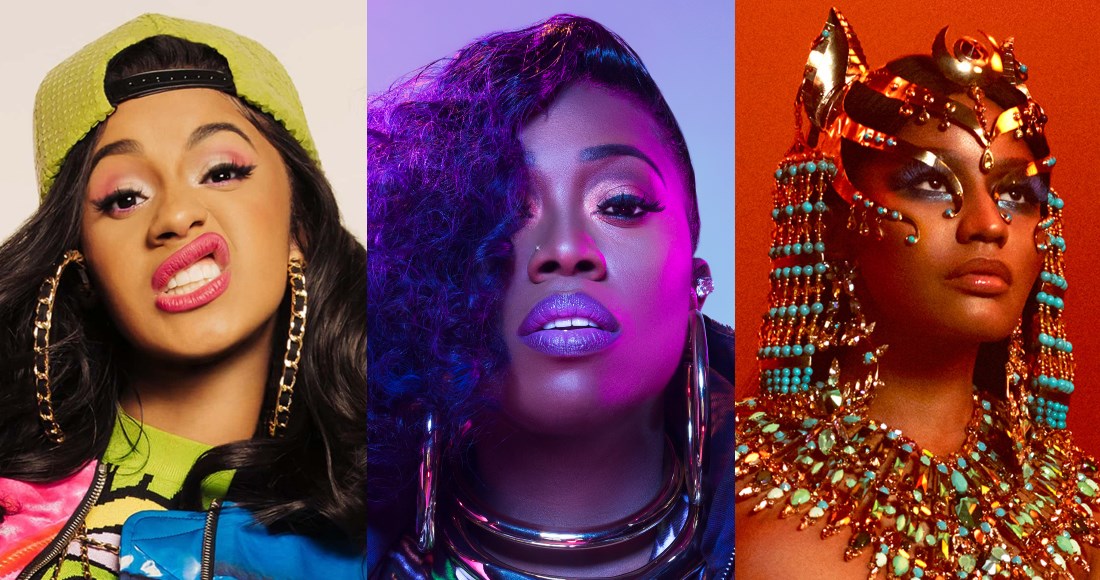 2020 has been a strong year so far for solo female rappers: Doja Cat, Megan Thee Stallion and Cardi B have all landed Top 10 hits on the Official UK Singles Chart. Factoring in popular remixes to Doja and Megan's songs featuring verses from Nicki Minaj and Beyoncé, there's been more female rap in the Top 10 than any other year in history.

But which solo female rappers have the most top flight hits on the Official Singles Chart? Let's find out.

Ruling the roost is Nicki Minaj, with 12 UK Top 10 singles to her name, amassed during 10 years of chart success so far. She first cracked the Top 10 with her featured slot on Jay Sean's 2012 (It Ain't The End) in October 2010, and true to the song's title, it was far from the end for Nicki.

Nicki has featured in the Top 10 four times as a lead and eight a featured artist on tracks by David Guetta, Flo Rida, Jessie J, Ariana Grande, Afrojack, Jason Derulo, Ty Dolla $ign and Little Mix. In all, Nicki's Top 10 hits have been streamed a combined 750,000,000 times in the UK.

A trailblazer for female rap, Missy has racked up 11 UK Top 10 appearances to date. Her latest release is a guest feature on Dua Lipa's Levitating remix alongside Madonna, so another Top 10 hit could be on the cards for her.

Philadelphia-born rapper Eve scored six UK Top 10 hits between 2001 and 2007, two of which are with Gwen Stefani: 2001's Let Me Blow Ya Mind was so successful they paired up again in 2005 on Rich Girl. Eve also teamed up with City High, Alicia Keys and Kelly Rowland for top flight hits.

Australian rapper Iggy Azalea was a breakout star of the mid 2010s, teaming up with big names such as T.I., Charli XCX, Rita Ora, Ariana Grande and Jennifer Hudson. Trivia: All of her Top 10 hits peaked at different positions.

Cardi B burst onto the scene in 2017 and while she's been more successful in her native US, it's been hits, hits, hits ever since her debut. She's claimed five Top 10 hits in total, collaborating with Bruno Mars, J Balvin, Bad Bunny, Maroon 5, Ed Sheeran, Camila Cabello and Megan Thee Stallion.

The only British rapper on the list, Ms Dynamite tore it up in the early Noughties with five Top 40 hits, two of which went Top 10 - both from her Mercury Prize-winning debut A Little Deeper. She enjoyed a chart resurgence in 2011, scoring her highest-charting hit with Katy B collaboration Lights On. Her last chart appearance was in 2014 on Top 3 hit Dibby Dibby Sound with DJ Fresh and Jay Fay.