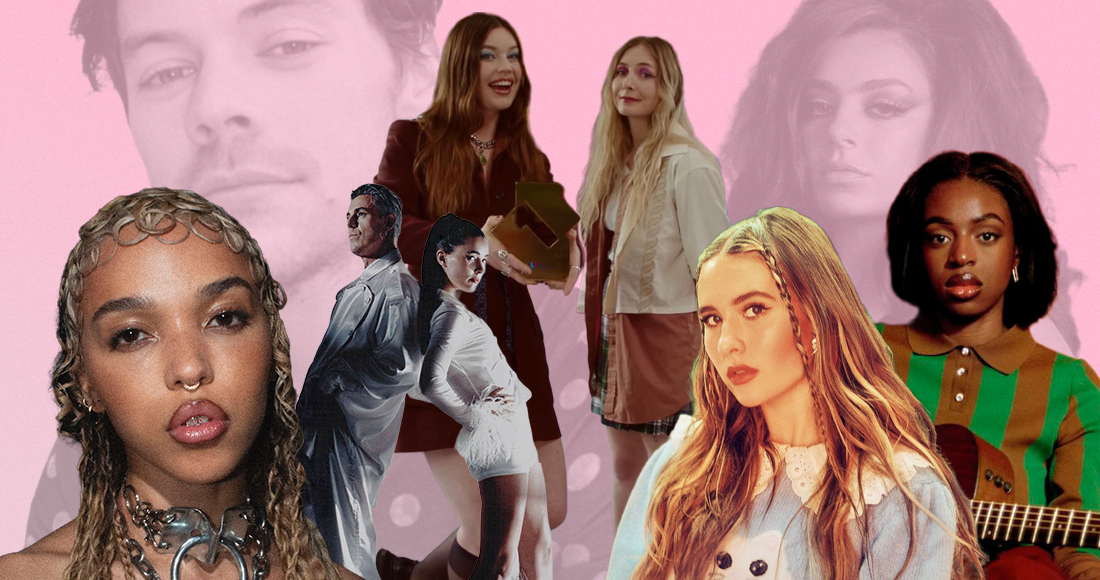 You'd think we'd be used to it by now, but somehow, every year, the passing of time baffles us. How are we halfway through 2022 already? Haven't we basically just had Christmas?

Well now, with the year having seen 22 different Number 1 albums and some huge hit singles, we're feeling reflective. Yep, it's time for the Official Charts team's picks of 2022's musical offerings so far.

Check out the records we've had on repeat below.

Cocteau Twin Liz Fraser returns with her partner Damon Reece on this exquisite track (and accompanying EP), which provides echoes of influences and influenced (from Kate Bush to Goldfrapp) and reminds us of her shimmering genius.

Following 2019’s acclaimed Designer was always going to be some challenge, but the NZ singer songwriter pulls it off effortlessly with Warm Chris, a collection of strident, but delicate songs, delivered by Harding in her typical manner, geographically, emotionally and melodically unlocatable. 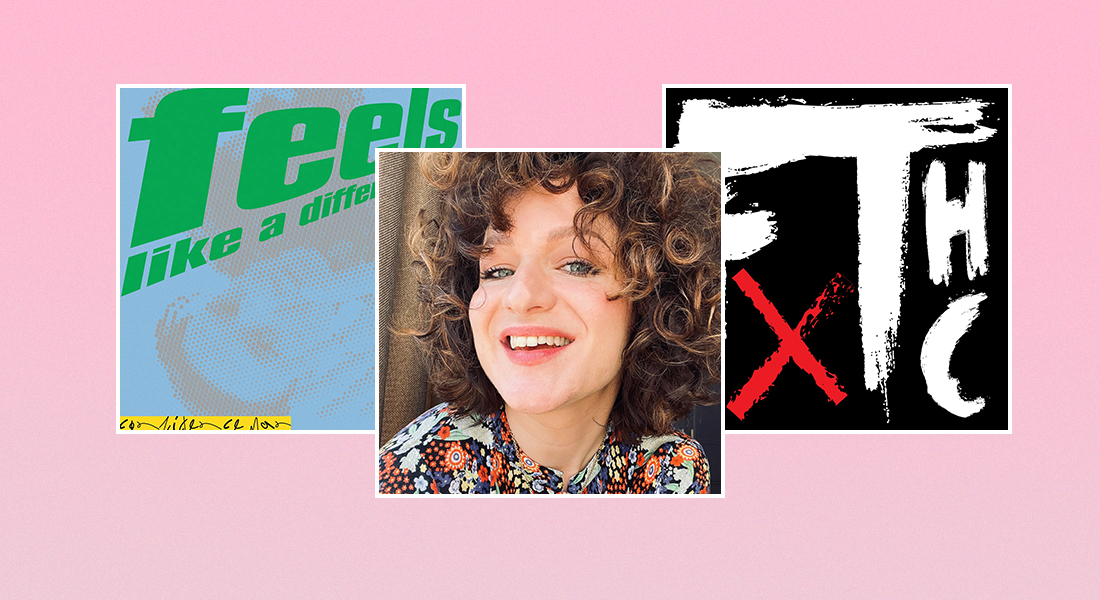 Oh Confidence Man, you’ve made my summer so far. From Mighty Hoopla to Glastonbury, and powering me through my Couch-to-5K mission too – an instant party anytime you need one.

Someone I know described them on social as an “Italo house Scissor Sisters on Pro Plus” and honestly, I can’t sum them up any better. An Aussie electro-pop four piece - they have tunes, they have off-the-cuff choreography, conical bras, and energy levels through the roof. If you need a pick-me-up, go see them perform, guaranteed you’ll walk away converted.

Yet to chart in the UK but 100% smashing the pants off the festival circuit here, they deserve more awareness so this is me doing my bit.

A Number 1 album has been a long time coming, but Frank Turner finally bagged one on his ninth attempt back in February, and deservedly so.

A return to hardcore for Frank, from the album’s unapologetic opener, to the tenderness of A Wave Across the Bay – a tribute to late Frightened Rabbit singer Scott Hutchison – FTHC is as diverse as it is raw. It was also our first in-person Number 1 Award shoot since lockdown, so holds a special place for reminding us of just how good it feels doing your thing as a team in real life.

Standout track – the poetic love letter to London that is Farewell to My City (Note to self - this will be my devastated exit anthem if I ever one day decide to leave the capital). 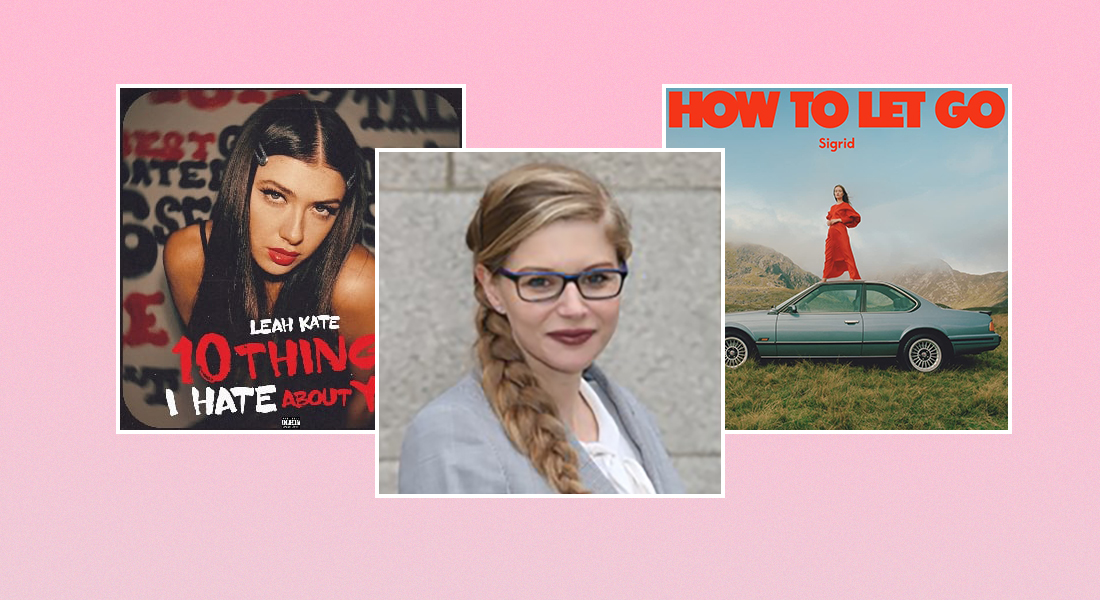 Single: Leah Kate - 10 Things I Hate About You

Maybe it’s something to do with going straight from a pandemic in 2021 to a cold war in 2022, but any track that makes me sing into my hairbrush at full volume gets a big thumbs up from me this year. There’s something about the chord progression combined with brilliantly-blunt lyrics that always makes me smile.

It’s the kind of song that immediately has you googling the lyrics so you can sing along with wild abandon and legitimately shout things like 'Ten, you're selfish. Nine, you're jaded. Eight, the dumbest guy I dated.' Is it a coincidence that it seems to be one of many tracks out this year channelling noughties vibes? I think not – while the world is so serious right now, it’s exactly what we need.

Album: Sigrid - How to Let Go

There are a surprising number of different styles on offer – from the poppy opening tracks It Gets Dark and Burning Bridges to disco tones in Mirror, then ballads Last To Know and High Note. Every track has a bit of Sigrid’s unique style, but also many varied influences - Dua Lipa in Mirror, The Killers in Thank Me Later and the fantastic collaboration with Bring Me The Horizon, the album’s wild card, Bad Life (which had me immediately listening to the acoustic version on repeat).

It’s a more grown up Sigrid, with much more power to her voice than her 2018 breakout single Strangers. As she sings in Mirror, 'I need loneliness, to know there’s nothing I can’t turn into confidence.' In every track you can hear the confidence of an artist who knows where she’s going, and I can’t wait to see what she does next. 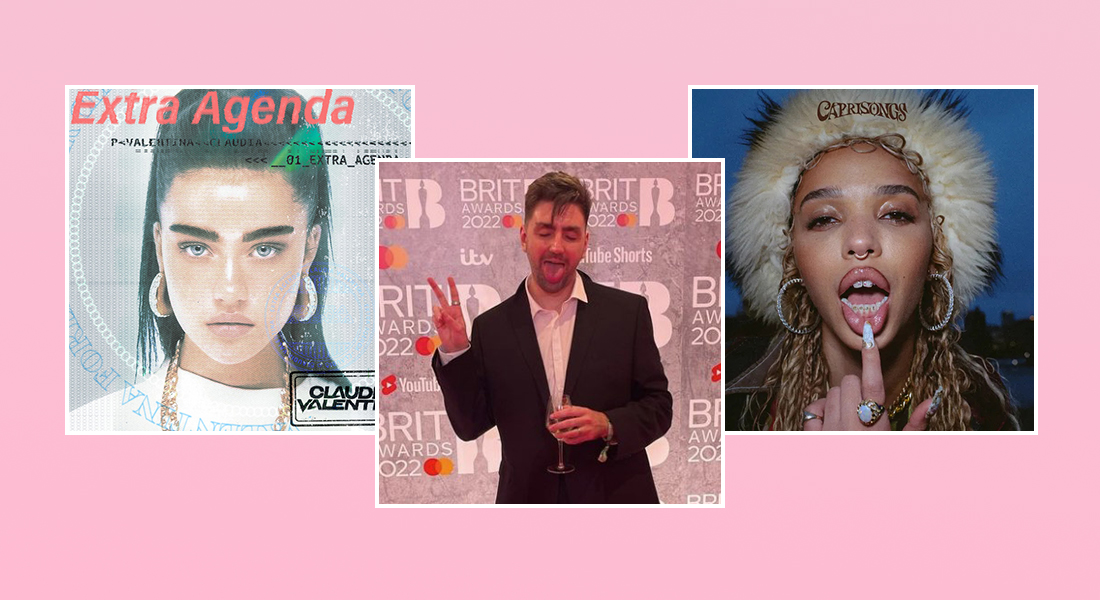 There’s no room for error or compromise on Claudia Valentina’s brilliant Extra Agenda, a nu-disco kiss-off to emotionally inept playboys (we see you!) ‘I ain’t call you here to conversate,’ she says. ‘Shut the f*ck up, give my mind a break.’ A riot from beginning to end, no one has the right to make a banger this big. One thing is clear – Claudia’s in control, and she’s here to stay. I mean, come on. That chorus? Iconic.

FKA Twigs has long been the kind of pop auteur I deeply admire - you’re not a true alt-gay if LP1 didn’t shape you - but I have always (a little selfishly) wondered what would happen if Taliah Burnett decided to, um, make a load of bops.

Caprisongs is just that - bops stacked on top of bops. Fizzing and flashing by at the speed of light, it’s the sound of one of our most dedicated artists finally letting the light in and having fun for the first time. There’s a lot to love here - from the tender Meta Angel, to the bone-shaking Papi Bones with Shygirl, Caprisongs is an eclectic collection that pushes twigs further and further into the realms of true pop supremacy. It’s a pleasure to hear her get there, finally. 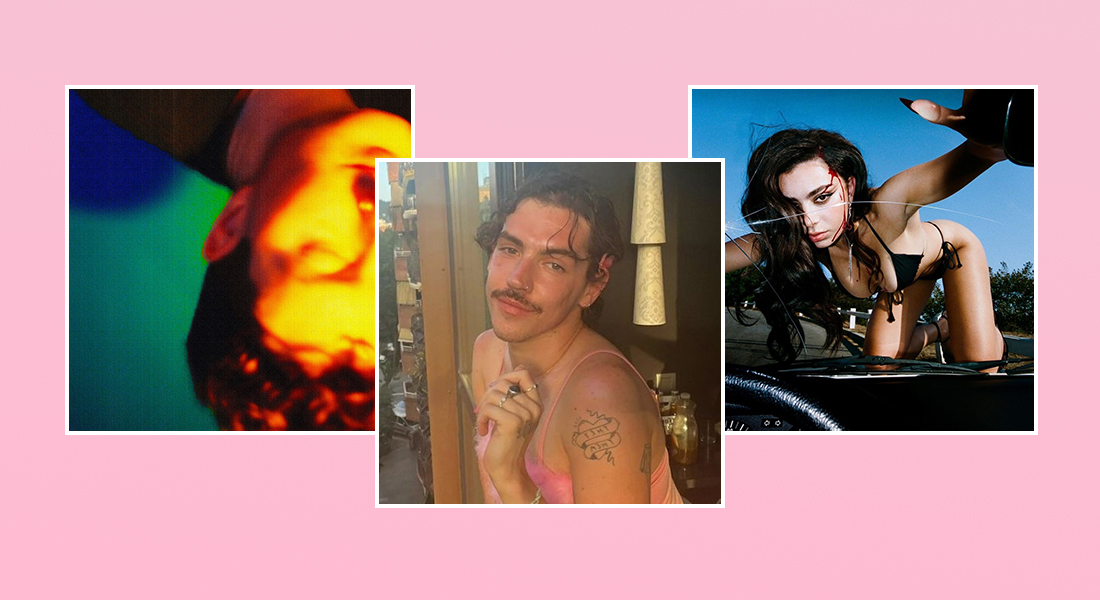 Single: Joesef - It's Been a Little Heavy Lately

Scotland’s resident dream-pop sad boi Joesef has consistently delivered since 2019, and It’s Been A Little Heavy Lately is his best yet. Building on his signature jazz-influenced lo-fi sound, the groovy tune distracts you from the desperation with its hip-shaking, hand-clapping production.

Charli’s main pop girl era is the best pop manifesto of the decade so far. She committed to the glossy, choreographed bombshell aesthetic, then backed it up with the album of her career. Combining the best of all eras – sparkling dream-pop, bratty Americanisms, frantic rave – she proved the industry would be a lot more dull and less melodic without her. Constant Repeat for next single, please! 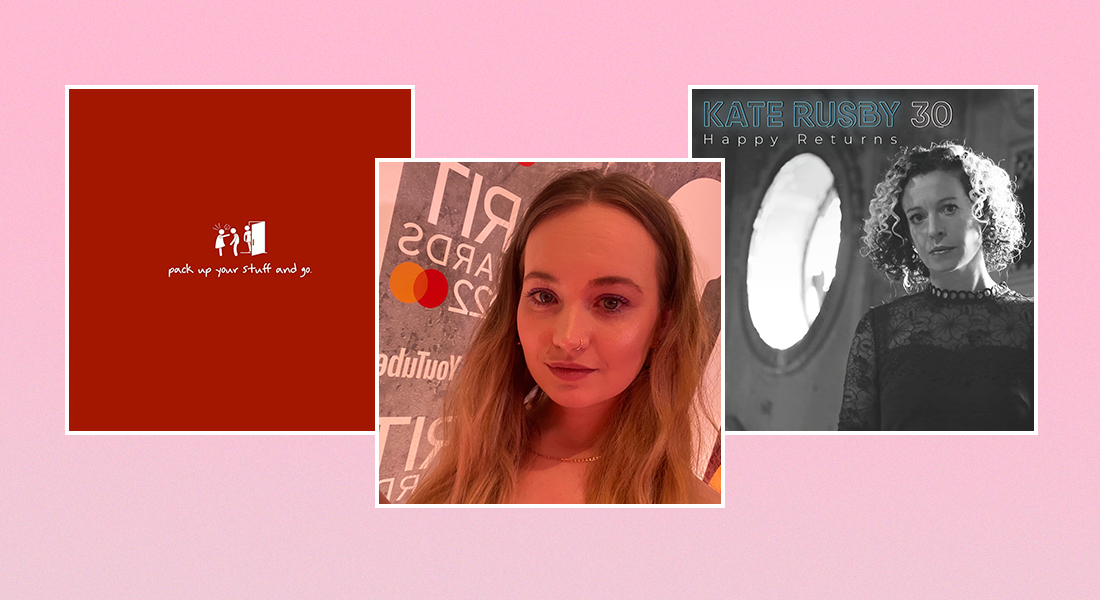 Cat Burns’ breakthrough song, and Cat herself, are a testament to how excellent new talent is discovered through new platforms like TikTok. I personally feel it absolutely would have deserved a stint at Number 1, but Number 2 really isn’t bad for your first chart hit.

I’m a lifelong Kate Rusby fan, so this album of re-recordings from across her career has been an absolute pleasure to have on repeat since its release in May. Featuring new arrangements and instrumentals, plus some gorgeous features which elevate these songs to another level, I’m so pleased to be able to hear these tracks again as Kate’s early albums aren’t currently available to stream (and my CD collection lives at my parents’ up north). 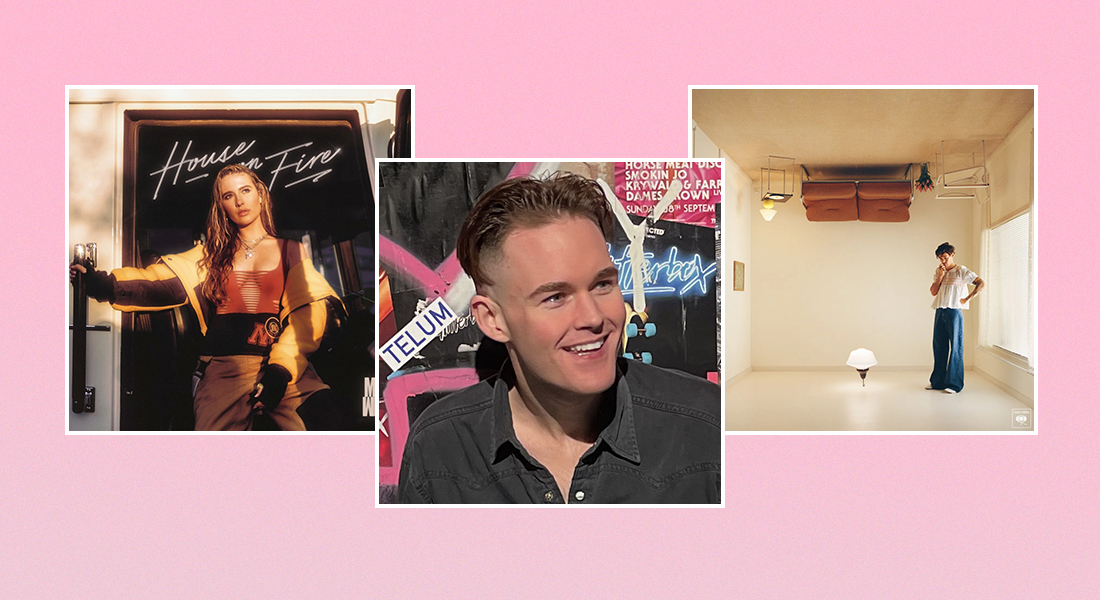 In 2022, so many artists can claim they've had a viral TikTok track. But, with the ephemeral nature of the platform, it takes a true star to transcend the app and carve themselves a proper pop career. Enter: Mimi Webb, who refused to let Before I Go's TikTok triumph box her in. Earlier this year, House on Fire marked Mimi's Main Pop Girl moment as she experimented outside of the ballads she was known for. A break-up bop packed with personality, this proved Mimi has the makings of the UK's next superstar.

If his self-titled debut was a statement of 'real' post-boyband musicianship, and 2019's Fine Line a sharp 180 seeking commercial viability, Harry's third offering saw him find his sweet spot. Striking a balance between the delicate, 'serious' singer-songwriter moments of his debut and chart-ready, stadium hits like Watermelon Sugar, Harry's House is the work of a confident artist who's honed his craft. It's experimental (that Satellite middle eight is exquisite), emotive (Matilda must get the single treatment) and, above all, fun. I genuinely believe Harry's House will prove a defining record of the '20s.

To find out this year's Official biggest singles and albums so far, check out OfficialCharts.com tomorrow from 8am.