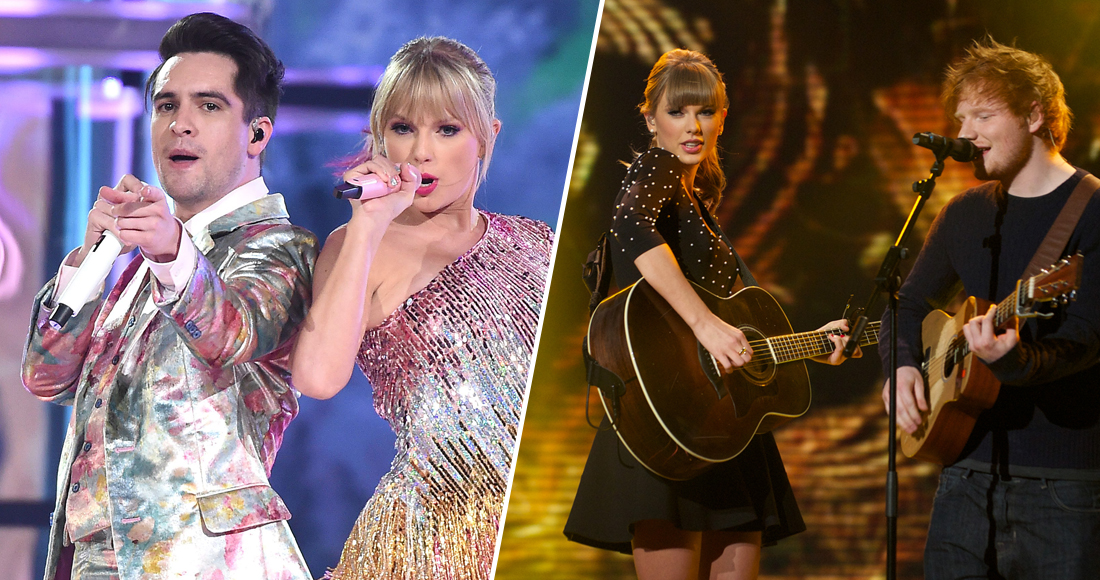 We're pretty sure that Taylor Swift may have the most A-list phonebook in all of the music industry.

During her 15 years in the music industry so far, the country-turned-pop-turned-folk megastar has collaborated with some of her closest friends and personal icons alike, ranging from her favourite artists such as Keith Urban and Matt Berninger to real life besties Ed Sheeran and HAIM. She has even teamed with her boyfriend Joe Alwyn, who produced some tracks on her GRAMMY-winning album Folklore, and she famously penned her ex Calvin Harris' song This Is What You Came For.

Following the news that she is to feature on two songs Birch and Renegade from Big Red Machine (Bon Iver's Justin Vernon and The National's Aaron Dessner)'s new album How Long Do You Think It's Gonna Last, we're looking back at Taylor Swift's Top 10 most popular collaborations in the UK.

Originally a solo track on her album fifth record 1989, Bad Blood was remixed with Kendrick Lamar for its single release as the fourth cut from the album. Taylor threw everything but the kitchen sink at the music video, delivering a stunning sci-fi epic which we can presume started out as many WhatsApp messages. Taylor welcomed a who's who of her showbiz pals to be involved including Selena Gomez, Cindy Crawford, Hayley Williams, Jessica Alba and Ellie Goulding to name a few. Third in the rankings of Taylor's all-time biggest collaborations, Bad Blood has racked up 756,000 chart sales split between 373,000 downloads and 48 million streams.

MORE: Official Charts bingo - Acts who have peaked at every position in the Top 10

2. Everything Has Changed ft. Ed Sheeran

In second place with combined chart sales of 771,000 is Everything Has Changed ft. Ed Sheeran. Taken from Tay Tay's fourth album Red, the song is one of four Top 10 singles from the album, the most among any of her LPs. Taylor and Ed performed the song together on Britain's Got Talent, boosting both of their profiles and firmly cementing them as future big name artists... and look at them now! In total, Everything Is Changed is Taylor's most downloaded collaboration with 373,400 paid-for sales and boasts a streaming tally of 45.2 million.

MORE: The biggest hits and chart legacy of Taylor Swift's Red ahead of its rerelease

Perhaps a surprising Number 1 to top the list is I Don't Wanna Live Forever, Taylor's tag team effort with Zayn Malik. But on closer inspection, the song's success is obvious, with it perfectly capturing the zeitgeist of 2016; Zayn was riding a huge wave of momentum following the success of his huge Number 1 debut single Pillowtalk, and the Fifty Shades franchise produced *the* movies of the moment. The result is a song that sticks out in Taylor's discography for all the right reasons, showcasing a mysterious and seductive side to her we've not often seen. I Don't Wanna Live Forever has scored 1.02 million combined sales to date, including a lofty 98.6 million streams.

In fourth place with 712,000 combined sales is ME!, Taylor's team up with Panic at the Disco! frontman Brendan Urie that was the lead single from her seventh studio album Lover. While people may not agree that spelling is fun, people did collectively love the video as ME! has the most video streams among Taylor's collaborations at 18.4 million, ten million more than the next most popular visual.